The 15th Women’s Forum for the Economy and Society (WF) featured 3,000 delegates from almost 100 countries, all gathered in Paris to highlight women’s perspectives and experiences on urgent global issues influencing every facet of society. Amongst them, 17 speakers and 40 volunteers from HEC Paris contributed to a highly successful three-day event nicknamed the “Women’s Davos”. 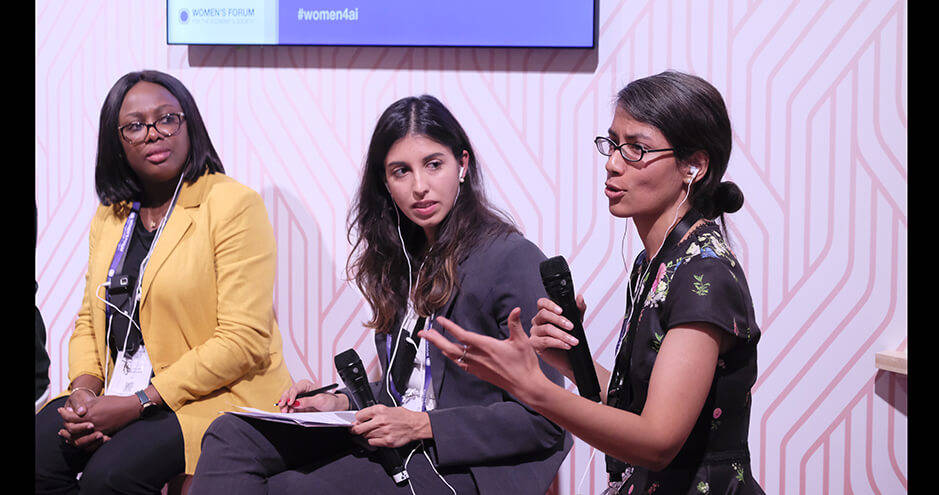 In some ways, this 2019 Women’s Forum Global Meeting on November 20-22 was coming home to roost. 15 years ago, Aude de Thuin and a group of powerful French women convened thousands of influential female leaders to Deauville for the first edition. Devoted to women empowerment from the outset, the flagship gathering has picked up enough steam to dictate or transform agendas worldwide. This year’s forum in the bowels of the Louvre Museum in central Paris was no exception, calling participants to “take the lead for inclusion… informing, influencing and empowering women and men to step up.” For the second time, it featured a partnership with HEC Paris and the school sent a strong delegation to the Carrousel du Louvre.

“The Women’s Forum has initiated an extensive survey on how firms use AI, which has proved to be most useful for my own research.” Since March, HEC’s Assistant Professor in Strategy and Business Policy, Mitali Banerjee, has been involved is the WF’s Daring Circles Initiative which included a detailed inquiry into how organizations design and implement more inclusive AI ecosystems. “This is a call to action and progress for women to empower AI to its full potential and for AI to empower women to their full potential. Ultimately, it stimulates greater societal benefits for all.”

In her own research, Banerjee has been using AI tools such as convolutional neural nets to measure the novelty of creative output such as paintings. “The algorithms we use are likely to have lots of social value biases in them. We need to be cognizant of how category labels are created. If not, we will blindly apply these algorithms and reproduce many of these biases.” At a lively November 21 debate, this specialist in computational models of creativity shared a high-powered panel which explored opportunities for AI to address barriers to women’s advancement in society globally. This has been part of a core debate at this year’s Forum that asked how the challenges of disruptive technology, unequal access to education and information - which, according to the panel, “limit human potential and stoke(s) populism and bias”- need to be addressed.

“Mitali was part of a large team of HEC researchers, academics and students devoted to these crucial questions which are having a huge impact on our world’s present and future,” said Inge Kerkloh-Devif, Senior Executive Director at HEC’s IDEA Center (Innovation, Digital, Entrepreneurship, Acceleration). She closely followed the intense three-day forum and its exploration of concrete recommendations which, in the words of the organizers, “take the lead for inclusion (and) accelerate impact.”

“We envision a world in which men and women have equal representation, impact and influence, and we foster a community that nurtures gender equality,” Kerkloh-Devif noted. “We promote gender diversity on campus and in the business world by inspiring the next generation of male and female leaders to challenge social constructs around gender roles and to work to change gender relations.”

Inge Kerkloh-Devif was also at the Forum to consolidate an ambitious Women’s Leadership program HEC is developing with Yale School of Management (SOM). This high-impact course starting on March 30, 2020 helps rising women leaders overcome the challenges in the workplace and add unique value and perspective to companies. The program, says Kerkloh-Devif, “is part of HEC’s overall drive to contribute to changing gender relations in the world of management and business.”

Yale SOM launched the Women’s Leadership Program in New Haven in 2016 and the demand for the four-day course continues to grow, says Lisa Kammert, Senior Director at Yale Executive Education. Kammert attended the Forum to meet the HEC team in this new collaboration with the school. “Senior executives continue to come to ask us for help in developing and retaining women leaders” Kammert explained. “They understand that gender-diverse teams at the top management level improves a company’s financial performance and ability to compete to a higher level. This program helps create teams with a holistic perspective where men and women complement each other in the skill sets. With Inge Kerkloh-Devif, we have been exploring how Yale and HEC can best bring the expertise of both schools in more collaborations like this to provide better access to some of the world’s top leaders in this region.”

Arguably, the trio making up Brighter Ventures incarnated one of HEC’s strongest representations at the Forum. TRIUM graduates Olga Granaturova, Vera Weill-Halle and Natalia Blokhina founded the non-profit organization to advance women-led entrepreneurship through coaching, network entry, visibility and so many other elements needed to break through the glass ceilings. “This Forum has been fantastic for us,” said Granaturova. “We’ve been meeting like-minded men and women from large corporations and feel confident that concrete exchanges will result.” Blokhina concurred but warned: “While this is a powerful platform, women still face biases, for example in the venture capital circles. Men continue to prefer working with other men, you know, birds of a feather fly together.” With her 30 years of international business experience, Weill-Halle believed the forum’s direct messages to level the playing fields can be effective: “I’ve been concentrating on policy-makers here and hope to influence them on the financial sense it makes to increase and support women entrepreneurs like us.”

The Brighter Ventures approach is backed by recent research from HEC Associate Professor Oliver Gottschalg who moderated a key panel on the Forum’s closing day entitled “In the long run: how women’s leadership is changing impact and institutional investing”. The speakers explored the institutional and systemic changes needed to shift business attitudes towards women leaders.

This was one of several topics that 1992 HEC graduate Agnès Hugot believed are the positive take-homes from this year’s forum. Hugot was convinced the three days have helped inspire both the school’s students, researcher and its nascent graduate entrepreneurs: “There’s a good balance that’s been struck for all these people. And it’s allowed them to see other perspectives, like fintech or local grassroots initiative combining with international business.”

Hugot’s own company, www.fasttracktrade.co, is a platform where corporates can trade with each other without any intermediary and request trade financing digitally in five clicks. “Digital trading is a way of overcoming the difficulties women entrepreneurs have with bank loans and investment. Using an app or a web service reduces gender gaps and cultural resistance and is both more discreet and easier to access.” The Australian government has quoted Fast Track Trade as a mechanism for SMEs financial inclusion in the APAC region, as Hugot initially set it up from Singapore to test her system before scaling it up.

For Mitali Banerjee, meanwhile, there are openings here with the French authorities. They are turning to the HEC academic for advice to make sure that, as they deploy AI, “they do not reproduce the same social errors they are trying to solve.”