The 2018 edition of HEC Paris’ annual D-TEA workshop brought together world-class researchers around the theme “Modes of Decision-making”. Almost 100 people attended the May 23-25 event organized by the HEC Decision Science team. The three days of intense exchange related theory to applications in various economic questions where the way people think, in particular about uncertainty, matters. 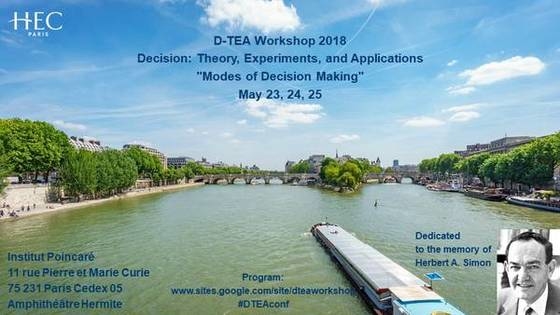 Behind the deceptively simple title conferred to the 2018 D-TEA conference hides a labyrinth of groundbreaking research, remarkable in its breadth and depth. During the three-day gathering held in central Paris’ Institut Poincaré, the participants explored components of decision-making such as routine versus deliberated, probabilistic or non-probabilistic approaches, rule-based and case-based decisions; etc. “As co-organizer this year, I am really taken by the unbelievable variety of research presented here,” said one of the 2017 D-TEA stars, Rida Laraki, professor at Paris Dauphine University. “You really have to plunge into the presentations each time, taking stock of the diversity of approaches before grappling with the researcher’s findings and conclusions.”

In some ways, the Paris conference and its 36 presentations highlighted differences between traditional and contemporary approaches to research on modes of decision-making. “Traditional economics describes decision-making as having a bunch of alternatives and wanting to choose one that makes you the happiest,” explained co-organizer of D-TEA and third year PhD student Fan Wang, from HEC Paris. “But there are other modes of decision-making that are a stark departure from this approach. This is because it is tremendously complex to measure the notion of “happiest”. Alternatives were explored for decades by the economist Herbert Simon  who invented this theory of “satisficing”, combining the words “satisfy” and “suffice”. Simon’s decision role aimed at simplifying decisions when you are faced with a huge amount of complexity. This is a more contemporary form of research.” 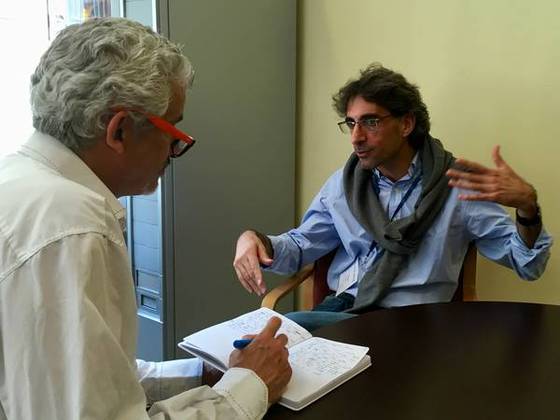 From Over-confidence to Forgetful Liars: the Many Modes of Decision-making

Exploring this field has become increasingly popular in academic circles, as witnessed by the 60% rise in papers submitted to this year’s workshop, compared to the 2017 D-TEA. “Interest has been very high and the themes tackled here are enriched by the growing importance of behavioral economy in this field,” admitted Itzhak Gilboa, the HEC researcher at the heart of D-TEA. “In the past, economists put individuals in a black box and dismissed psychology. But decision-making plunges behavioral psychology into economics. And it provokes all kinds of questions: where do beliefs come from? How do they arise? These are some of the questions I’ve been working on since 1995.”

Indeed, at the  conference Gilboa presented a paper in line with these reflections, focusing on the election of Barack Obama and arguing that, since the 2008 presidential race, being white no longer matters. The world-recognized specialist in decision under uncertainty argued that this important example of a precedent shows that people do not only learn from the past, but they also learn how to learn from the past. “Itzhak’s presentation was a formalization of how people formulate a judgment of which cases are more relevant,” explained Fan Wang who has been working on the field with Gilboa, “and which characteristics are more important and which aren’t.”

Other highlights at the conference included Aldo Rustichini’s biological analysis of decision-making; probes into how we should decide in the face of uncertainty by HEC’s Brian Hill; the research by HEC 2014 graduate Anisa Shyti on how overconfidence favors riskier business; Ariel Rubinstein and his take on multi-dimensional reasoning in games; Philippe Jehiel with his intriguingly entitled paper “Communications with Forgetful Liars”; and Anna Rubinchik who shared her work on animal learning in what she calls a “multidimensional discrimination task”.

In this last paper, Rubinchik immediately warned the audience: “We used a very simple model with a rat in a labyrinth - but real-life situations are far more complex, with contingency factors like subjectivity, for example. So,” she added with a slight chuckle, “we prefer to go back to the security of the model based on a rat facing simple choices, guided essentially by odor or light.” Simple, it might have looked – but the conclusions are far-reaching: “We offer a way to identify bias in decisions,” said Rubinchik. “We also conclude that paying attention to a particular dimension of the problem may impede identifying the key to success in a new environment.”

The focus on decision-making modes certainly did not seem to impede the success of this D-TEA workshop at the institute’s Hermite amphitheater. “This was the first time I’ve been,” said Radboud University Associate Professor Jianying Qiu, “and it clearly lives up to its reputation as one of the top three conferences on decision science in the world.” Grenoble University researcher Ani Guerdijkova concurred: “This is a tremendous conference both in its depth and diversity. You have the continuing dynamism of academic leaders like Larry Samuelson  presenting his latest research on model-based reasoning, but there’s also room to hear about the explorations by young PhD students like Nuttaporn Rochanahastin  who shared his work on assessing axioms of theories of limited attention. It maintains this meeting as one of the highest levels of reflection in decision science each year.” Guerdijkova is to chair a roundtable on ambiguity in dynamic interactions at another highly-prestigious event at the end of June, the FUR Conference (Foundations of Utility and Risk Conference).

The theme retained for next year’s D-TEA has already been chosen and is likely to once again attract dozens of world-renowned academics. “This being David Schmeidler’s  80th  birthday, we’ve decided the focus will be on decisions and uncertainty,” confided Fan Wang. The veteran economic theorist has made vital contributions to this field, including the theories of Choquet expected utility maximization and maxmin expected utility. The latter was developed with none other than Itzhak Gilboa who was originally Schmeidler’s doctoral student. HEC’s decision science team includes others who have been working on similar topics, notably Mohammed Abdellaoui who has forged a global reputation for his work on decision sciences.

Once again, the workshop is likely to underline the multidisciplinary, complex and largely-overlooked discipline of data science which is making huge inroads in the economic field.