Professor Alberto Alemanno has been bestowed the 2022 Schwab Foundation Social Innovation Thought Leader of the Year Award at the World Economic Forum in Davos for his decades-long investment in theorizing and experimenting new forms of political participation. This prestigious reward reflects the academic’s impactful engagement in democratizing access to power. This is the result of making corporate lobbying more ethical and responsible while strengthening the advocacy capacity of civil society. On the eve of the January 18 reward ceremony, Alemanno shared his thoughts with us. 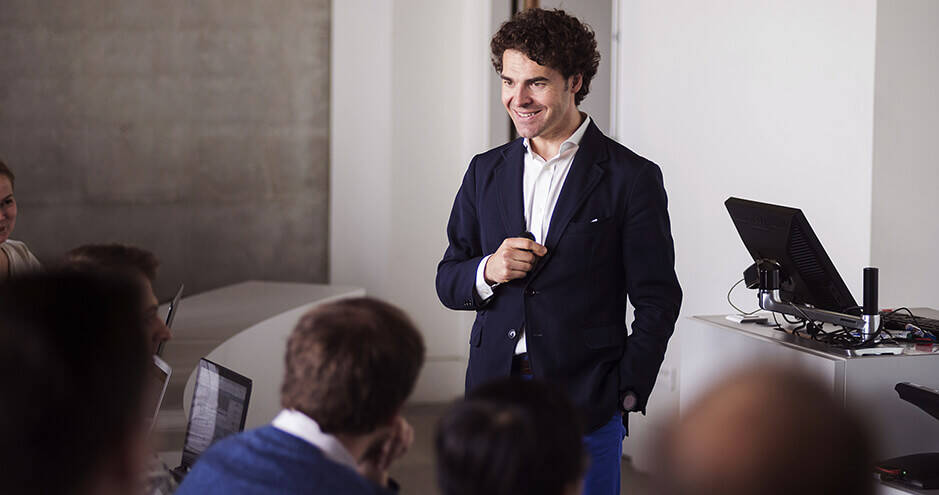 “I am grateful for this recognition at a moment in which people are looking around for new cultural, economic and political paradigms to replace the one we have questioned and intend to overcome. The time has come to ensure everyone has a voice in this process of individual and collective re-invention”. With modesty, Alberto Alemanno deflected the annual prize towards joint efforts to democratize access to power in order to reduce existing economic, social, health and political inequalities. In the past decade, Alemanno’s innovative approaches have found expression in his Brussels-based nonprofit organization, The Good Lobby, which has spearheaded a movement for ‘good lobbying’. It has already been embraced by some key change-maker communities, from B Corps to philanthropies and nonprofit organizations.

Since 1998, the Schwab Foundation, led by Hilde Schwab (wife of the Executive Chair of the World Economic Forum, Klaus Schwab) has backed academics/social entrepreneurs as they work to create a more equitable and sustainable world. Alemanno is one of the few amongst the 300+ awardees to keep one foot in the academic spheres, at HEC Paris, and another firmly in the nonprofit and social innovation world.

“Alberto has been at the forefront of action research for over a decade, pioneering new forms of forward-looking scholarship, teaching and displaying real-time multi-stakeholder engagement”, said HEC Paris Dean Eloïc Peyrache after the award was announced. Peyrache added: “Today, Alberto plays an integral role in HEC’s mission to positively impact business and society through cutting-edge research, education and action”. Alemanno has shared his knowledge and engagement with his students for the 13 years he has been teaching at the business school. “This award is a testament to HEC’s academic freedom. That’s what allowed me to both craft and experiment new scholarly ideas on the ground through a variety of method, format, and stakeholders, starting from our international students” said the author of Lobbying for Change: Find Your Voice to Create a Better Society. “We see them engage with, criticise and sometimes embrace some of my ideas while gaining new skills. The combination has been most rewarding.” Speaking from his writer’s hide-out in the Basque country, the 46-year-old said his own work is currently focusing on forging a global framework for responsible and sustainable lobbying. “As companies become increasingly responsible for their environmental and social impact, one of their footprints remains entirely invisible. That is their ‘democracy footprint’, which companies leave as a result of their unrestricted lobbying and other forms of influence of our governments. Today this phenomenon is the major factor underpinning lack of progress on numerous critical issues ranging from the failure to act on the climate emergency to offshore tax evasion. As such, it pushes down citizen’s perceived trust in government and business”.

Alberto Alemanno firmly believes in leading by doing. The prolific writer has just published two articles feeding into his commitment to increasing citizen involvement in Europe. In “Citizen Power Europe” (co-authored in January with Oxford University Professor’s Kalypso Nicolaidis), he proposes three ideas to renew the democratic ecosystem: “ Participation beyond voting; a transnational and inclusive public space; and a democratic panopticon for greater accountability.” While he admits that the proposals need refining, they already form a strong base: “Let’s tap into our collective intelligence and democratic imagination,” he writes, “to construct a pan-European public sphere by enhancing mutual connections, knowledge and empowerment between citizens across borders.” Meanwhile, in the forthcoming paper, “Unboxing the Conference on the Future of Europe and its Democratic Raison-d’Être”, Alemanno tackles this highly innovative democratic initiative, which invites citizens to have their say on the future of Europe. He believes this creation “marks the first explicit admission that (the citizens) are the EU’s ultimate source of authority and legitimacy.” Whilst preaching caution, the Jean Monnet Professor of E.U. Law Policy believes that “Europe’s democratic genie is out (and) it will be difficult to put it back in the bottle.”

Through such publications, the academic adds to an already rich heritage – both theoretical and practical – that will be further encouraged by the Schwab Foundation award. In terms of Alberto Alemanno’s on-the-ground engagement, let us echo the words from TED which introduced the activist researcher in 2019 with this sentence: “Alemanno succeeded in showing that lobbying doesn’t have to be a dirty word, provided it is used more responsibly by the few (corporations) and more often by the many, such as non-profits, social entrepreneurs.” Ultimately, Alberto’s toolbox not only focuses on policy change but also on social norm formation.

Listen to the "Tomorrow is our Business" podcast with Alberto Alemanno :