Making the Distinction between Liberalism and Capitalism in the 21st century

Valerie Charolles is a researcher at the Institut Mines-Telecom Business School and associate researcher at the Interdisciplinary Institute of Anthropology of the Contemporary (CNRS-EHESS) She has published four papers, including ‘Le libéralisme contre le capitalisme’ in which she describes the synonymy between the two concepts as ideologies, taking the form of a ‘soft totalitarianism’. As part of its series of lectures on the ecological and social transition, the Society & Organizations Center was delighted to invite her for a talk. 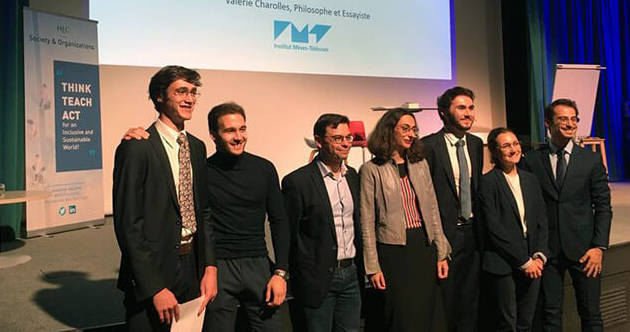 Why is it important to you that first year students at HEC understand the difference between capitalism and liberalism, which was the subject of your presentation and your book?

Valérie Charolles: I think it is essential to deal with this basic issue, because it allows us to understand the world we are living in. We have to avoid using the wrong terminology to describe the economic system in which we operate. Explaining that it is capitalist is not offensive, it’s an observation. One could also say that it was neo-liberal or ultra-liberal, but it can’t be described it as liberal if we are to take Adam Smith's philosophy as a reference point, which is the one I rely on. This is important because it avoids misunderstandings about what the market economy is. If balance is at the heart of liberal thinking, this is not the case with capitalism. If we differentiate liberalism and capitalism properly, we could better protect ourselves against the overwhelming power of finance, and its resulting crises, in the name of balance and competition in a liberal market economy.

How would you explain the blindspot that continues to exist – the way in which we often put liberalism and capitalism in the same category?

This is one of the big questions I have tried to answer in my book. Essentially, we confuse liberalism and capitalism at an ideological level. It is a sort of trick of reason and of history. Sometimes, people have us believe one is the other, in order to serve certain interests and because it can be easier to explain that way. Up until twenty or thirty years ago, ‘capitalism’ was often considered a dirty word because it came under communist criticism. It’s because of this that we’ve rejected it and replaced the word with ‘liberalism’.

Today, however, when even a country like China is welcoming some form of capitalism, the landscape is better suited to making a clear distinction between liberal thought and capitalist thought, so that we can then see what consequences this might have. 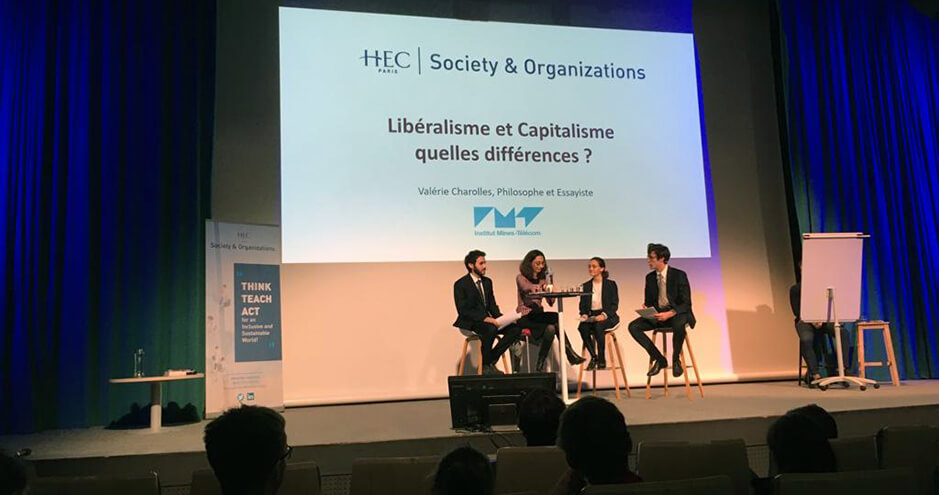 In your book you write: “We don’t think about the economy, we endure it”. What is it that stops us from thinking about it, and what do you mean by ‘enduring it’?

It needs to be said that there are not many philosophers who work on this type of question, and not many proposals, outside of the economic sphere, on the subject. And this despite the fact that the economy is forced onto us, dominating the organization of life today. That’s why I described it as something that we endure. We need to arm ourselves with a more refined, more articulate analysis of the economy so that we can stop submitting to it, and in particular, we must really make distinctions within the economic sphere, between practice, rules, theories and discussion. In this way, we could both rebuild the economy and free ourselves from its clutches. Because the economy gives us purpose and order, even if it is not the sole value in life.

In your presentation, you cited the political philosopher John Rawls and his book Justice as Fairness’, in which he describes the five types of possible political/economic regimes. Which regime would you say exists in France?

France is an example of a welfare state, that’s to say a system where we allow the economy to function on a capitalist basis in which businesses are judged according to the needs of the financial markets. The inequalities and problems that this causes are covered by the state, with increasing costs. For Rawls, this is one of three systems that do not work in terms of equity. The other two are laissez-faire capitalism and the communist system.

On the other hand, he puts forward two systems that ensure equity. Both are liberal, in my opinion. The first is owner democracy: everyone is more or less owner of his or her own production tool. The second is called liberal democratic socialism and corresponds more or less to the German system. In this case, there is a lot of self-determination and employees are more involved in the management of companies. In medium-sized German companies, one third of the management boards are composed of employees.

I would place the United States within a laissez-faire capitalist regime, with a large helping of protectionism. Rawls says that an owner democracy could better suit the U.S. As for Western Europe, he envisages more of a liberal democratic economy.

What is your view of the teaching of finance in French business schools? Is there a teaching commensurate with your approach that would better distinguish liberalism and capitalism? Here, for example, we have introduced a new program, Purposeful Leadership, which puts the search for purpose at the heart of its teaching.

I get the impression that things have changed a lot since I was a student, in a good, more open, way. Sadly, however, I still see many schools teaching neo-classical finance, invented by theorists such as Harry Markowitz, and the Black-Scholes models which I would argue lead to unsustainable finance. I think that we need to create  a movement towards questions of ethics and purpose – and it is great to see this happening at HEC and Sciences Po. We must also reflect on the way in which we integrate these values in accounting classes, finance, and all the rest. I am optimistic because I think that students have a thirst for this approach, and that their institutions do, too.

You wrote that the twentieth century was the century of words and things, making reference to Michel Foucault’s The Order of Things, and that the 21st century will be the century of facts and figures. You add that the latter should not be a century of a positivism that will "enslave” us. What do you mean by that?

In the twentieth century, philosophy was very interested in the question of words and things, with the ‘linguistic turn’. Today, the question that should interest my colleagues concerns facts and figures. What is the relationship between facts and figures, how can we construct figures? Are they always right or useful? How do we use them? If philosophers are not interested in this subject, we risk becoming trapped in a society where you are confronted by figures that reveal the so-called ‘Truth’, against which we have no choice in terms of freedom. That's what I mean by narrow positivism. Freedom is a principle that we must know how to maintain, including the way in which we model behaviors, that is to avoid being too narrow in our scientific models.