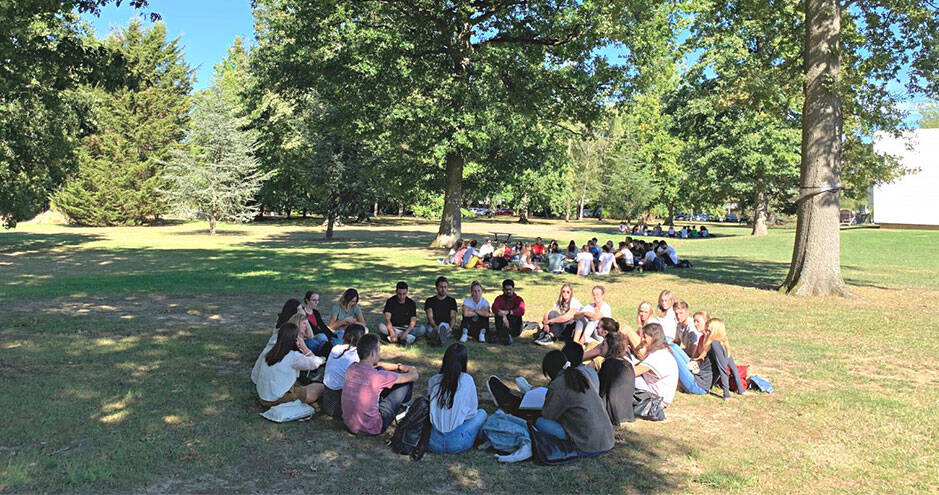 Difficult to sum up in few words the density and quality of the speakers summoned in September to share their vision with students embarking on their HEC careers. Most were invited in the context of the Ideas Festival organized by the Master in Sustainability & Social Innovation (SASI). Three years after its inaugural edition, the intense three-week seminar has reached the age of maturity, as reflected by the speaker roster. “The pedagogical objective of the Festival is to define and understand challenges on climate change, biodiversity crisis and social inequalities,” stated its Executive Director, Déborah Keraghel. “Based on the latest scientific findings, it empowers participants to imagine what the ecological transformation should look like.” The overall response to the Ideas program was one of enthusiasm. “What I loved most about the SASI festival is its variety of subjects and impressive guest speakers,” said 2022-2023 cohort student Isabella Vilsmeier. In the space of just three weeks, the festival enables you to broaden your horizons, question the status quo and arouse your curiosity for so many new things you were unaware of. It confirmed to me that I chose the right Master.” For fellow-student Nicholas Fazio, each exchange brought its lot of perspectives and insights into current practices. “We were fortunate to learn from multiple engaging guest speakers, field visits, conferences, and hands-on activities. In a word, it was intellectually stimulating, thought provoking and intense.”

The event, with its savvy mix of speakers, conferences, debates and workshops, was attended by almost 100 SASI students from 27 nationalities, as a result of the Master doubling its student numbers this year – a record. “This year’s intake,” said SASI Scientific Director Jeremy Ghez, “echoes the growing concerns and demand for clarity and depth on issues related to sustainability. These guest speakers drive home the realities our students, future leaders in this most challenging of worlds. We see an acceleration of crises around us and it only goes to prove how vital our work has become.”

Central Roles of Trust and Research

This acceleration was driven home by keynote speakers like Yann Algan.  The HEC Professor of Economics is an award-winning author whose work centers on trust. Algan spoke for over an hour on the links between climate and social crises and their links to rising populism and mounting inequalities. “Along with my fellow-researcher Daniel Cohen, I have been studying questions of trust, resilience and cooperation with a pool of 50,000 French citizens,” he told the packed auditorium. “We found a strong correlation between the loss of trust in the government and performance, which brought on a strong sense of loneliness, especially in rural areas. This could partly explain the emergence of the Yellow Vest movement (“les gilets jaunes”), which was mainly composed of workers in isolated services (truckers, social care, single mothers, etc). It nourished growing tendencies of populism and suspicion: for example, trust in scientists plummeted in France by almost 20% to 70% (compared to almost 90% in the UK) in six months last year. This has an obvious impact on reducing carbon emissions.” 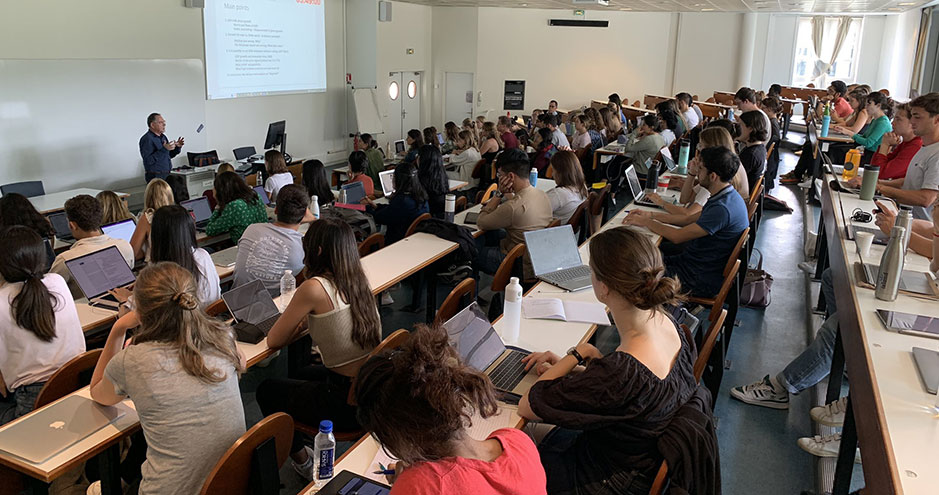 For Eric Chaney, there is an urgent need to invest more in research to find alternatives to the use of traditional energy sources like coal. This is particularly the case in developing countries in the Indian subcontinent and Africa. The former Chief Economist at AXA presented the students his vision of the future entitled “Growth, Degrowth, Green Growth”. “To better understand economic growth and its impact on contemporary green growth, we have to retrace the very concept of GDP,” he explained, “and that goes back to 1890s, according to the research by the former INSEE administrator Pierre Villa. These graphs,” Chaney continued, pointing to his PowerPoint, “show the volatility of GDP measurement. But it had the merit of smoothing over real GDP.” The adviser for the Montaigne Institute went on to meticulously traced the GDP’s evolution before addressing calls by visionary economists like Joseph Stiglitz to bring in other crucial factors such as welfare, social issues and the “solidity of society”. “Other flaws in GDP measurement remain,” Chaney added. “The importance of the informal sector especially in developing nations, for example. Gross is not net, and intangible factors make GDP very shortsighted.” Chaney went on to insist that it is possible to cut carbon emissions without cutting GDP. A point in case, he said was the 28% growth of GDP in the European Union between 2000 and 2019, in parallel with an 18% drop in its carbon footprint. To grow this tendency, he concluded, governments should instigate a global carbon dividend comprising of carbon taxes and royalties.

For Guillaume Pitron, finding new strategies to tackle carbon pollution is all the more urgent in that the goals set out by the UN are, according to the journalist, “simply not achievable with the existing technologies”. The French author of the bestselling book “The Rare Metals War: the Dark Side of the Energy Transition and Digitalization” warned students there is a dystopian side to the green-tech revolution that so many global leaders are trumpeting: “I am all for a transition away from fossil fuels but, as a journalist, I have a duty to ask: ‘How are we going to achieve it?’ It’s an open secret that we’ll be consuming as much petrol in 2035 as we are today. This is no transition, it is just an addition of electric-powered energy to the current fossil fuel energy...and the former comes at a huge cost.” Pitron mapped out the polluting impact of extractions of the rare metals needed to power electric vehicles, solar panels and wind turbines. “Green technology was born in the Earth’s crusts. The lion’s share of the rare metals market has been captured by China which has sacrificed its environment to feed the green needs of the world.” The reporter insisted that the costs of extraction and the pollution it caused need to be integrated into the equation when calculating carbon reduction. “Our pollution has been outsourced. The world is now divided into those who are producing for green energy and those who are enjoying it.” To reduce the material and energy cost of clean technologies, Pitron called for the implementation of a truly circular economy “which is far harder to design that a green-tech economy”. “This is the best option at the moment,” he admitted. “But with half as much material, you can still grow the economy. The circular economy goes way beyond the notion of recycling. You need to have designers talking to recyclers. For example, designers can rework their smartphones to guarantee the used components are recycled. In this global drive, I’d like to praise the work of the Dutch Green Tech company Fairphone who have been working for over a decade on such issues.” After the success of Pitron’s first book (translated into 9 languages with sales totaling 100,000 in France alone), the filmmaker recently published a second book-length investigation on the environmental impact of the digital revolution, called “L’enfer numérique: voyage au bout d’un Like” - soon out in English.

Human Rights in the Digital Age

Pitron’s investigative work also touches on the question of human rights and technology, an issue largely explored by another guest speaker during the Ideas Festival, Charles Autheman. The independent French consultant on human rights for the likes of the ILO and other UN agencies has come a long way from his days as an HEC student mastering in Entrepreneurship (H09). In the past years, Autheman has been providing toolkits to report on forced labor, as well as promoting balanced media reporting on migrant workers and child labor. “Can we have sustainability without human rights?” was the question he asked the students in his September 15 talk. Autheman showed a picture of Eritreans holding up their smartphones on a Djibouti beach.

“These are migrants trying to get a signal as they work and migrate their way from the Horn of Africa towards the West. They are amongst the millions of workers roped into forced labor, a population which has shot up from 12.6 million in 2005 to 27.6 million this year. They are the untold story, under our radars. For me, this photo is a metaphor on the current state of human rights in the world. People here in the West are not getting this signal. And it’s our responsibility to make people aware of these realities since it’s the only way to really drive sustainability.”

The need to bring these realities out into the open was one of the elements promoted by one of HEC’s most popular public speakers at the start of the academic year, delivered by Jean-Marc Jancovici. He was invited by Esp’R, a high-profile student association aiming to raise awareness of socio-economic issues on campus. To do this, the association promotes inhouse social economy and sustainability projects. So, for hands-on advice, the group turned to Jancovici, founder of Carbone 4 which, in its own words, assists the transformation of the world towards decarbonization and adaptation to climate change. The veteran energy expert is also the founder of the Shift Project and shared his vision of a new economic and social model to a full house and hundreds more online. On September 28, students greeted the specialist in carbon strategy with a barrage of questions in a pre-arranged format whereby Jancovici adapted his answers exclusively to the public queries. “He came to our campus on a bicycle despite the challenging weather,” announced the Esp’R student in his introduction, “and he will now describe an urgent economic transformation plan which needs to be implemented before it’s too late. Jean-Marc, what is this plan?”  The designer of the Carbon Assessment Method immediately launched into a detailed answer of what he dubbed “an economy without the Euro economy”: “We drafted a 1,500 page proposal for the French government with a vision on how to bring down greenhouse gases emissions inside a new paradigm. At the core, we need to stop thinking economic performance and start working on economic resilience.” The author of eight books on the topic, Jancovici delineated a societal model where communication plays a central role: “You have to put science at the heart of public debate. But good luck for that, since journalists have a literary grounding and science is a technical, complicated field... and it doesn’t sell ads well! Furthermore, reporters have a hard time sifting fact from opinion; they turn to people who are the easiest to reach, who use the simplest language. That marginalizes many of us.” The solution? “Social networks and Youtube. You have to start with the base, you, the youth. There needs to be a huge groundswell through social media. It puts a kind of pressure which can induce change in the media.”

In parallel, Jancovici advised students to start small and build in the hope of changing things from the inside: “Go for small structures where you can influence carbon policies close up. Or try to change things in the academic world, since scientific research does have impact on policy. Help create a toolbox, based on serious scientific papers, on how to create an economic model in a world of contradictions. This can have an impact on the major companies that govern our world.”

The two-hour conference was loudly applauded. In the first two weeks of its broadcast, almost a thousand people left comments and insights, a sign of the importance such issues harbor among the student population, just weeks before the start of COP27.