One of the most keenly anticipated annual research gatherings returned to its 100% in person format on May 13, as HEC Paris hosted top academics to debate over topics as diverse as migration, business models for the circular economy and the CEO gender approval gap. Keynote speakers at the seventh edition of Research Day were Pascual Berrone and Christopher Marquis. 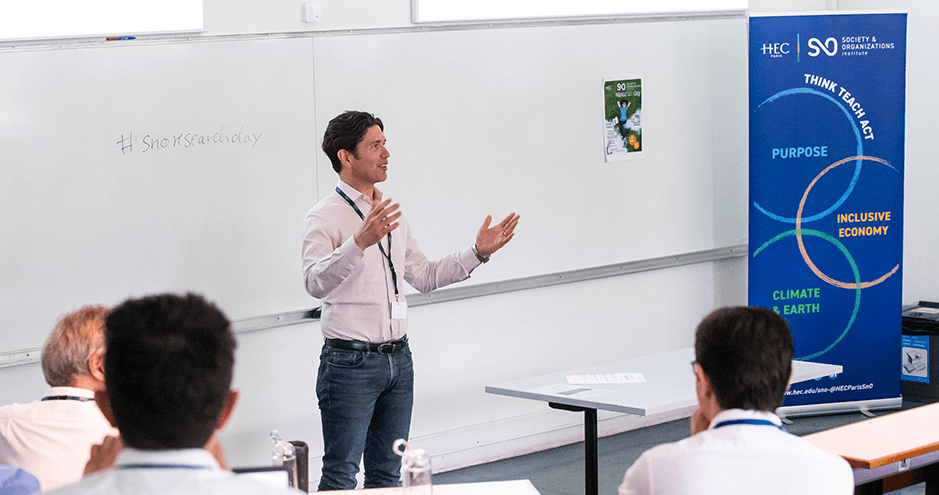 On May 27, 2021, the S&O Research Day co-organizer, Georg Wernicke, declared: “I’d like to make one solemn wish: that this is the first and last such event which will be remote! Here’s hoping we see each other on our campus in 2022.” The 45 researchers at the sixth edition applauded loudly. A year later, Wernicke and his fellow organizer Rodolphe Durand’s wish became reality, as top-class academics gathered on the HEC campus with a renewed sense of energy – and urgency. The researchers came from Germany, Italy, the United States, Denmark, Sweden, Great Britain and, with a sizable representation from HEC, France. Presentations ranged from forced migration to CSR “at the margins”, via drug shortages and anti-mafia interventions on borders.

Thanks to its keynote speakers, however, an over-riding reflection centered on how such research could make an impact on society, its representatives and business at large. «I wanted my keynote paper to focus on the slightly provocative debate pitching rigor against relevance and how this recurrent question has been evolving these past couple decades,” said IESE Professor Pascual Berrone, whose extensive managerial experience spans Latin America, the United States and Europe. “Yes,” admitted Wernicke, “Pascual’s was a punchy keynote speech designed to call on researchers in sustainability management to increase their credibility through more quality research. And he really got the ball rolling by addressing the academic-policymaker gap, especially in the sustainability field and the role of the government, as a major stakeholder.” 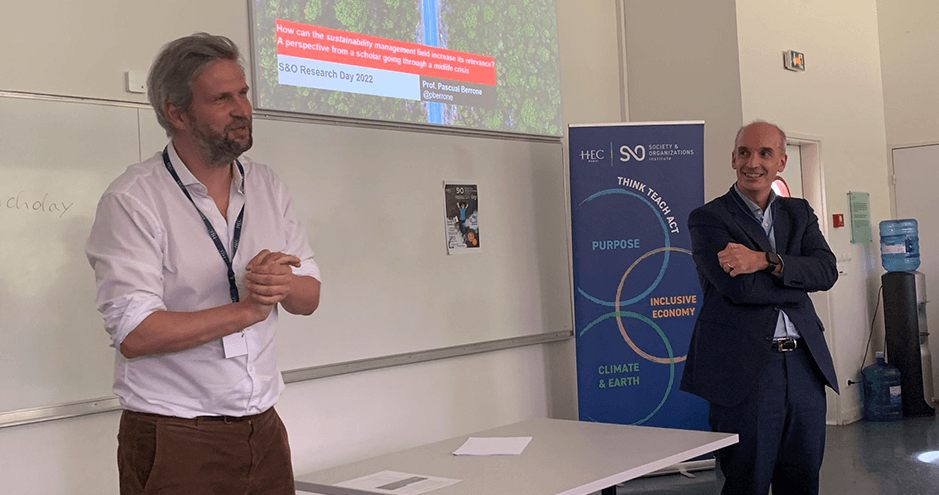 Berrone elaborated: “When you see the emphasis governments put on sustainability, research is quite small and narrow in comparison. The idea behind my presentation was to invite fellow-researchers collectively to consider not only the impact of policy but how governments actually work. I also proposed going beyond governments as entities and organizations to integrate other units of analysis which might be relevant for us as a sustainability management community, such as cities and regions.” Fellow keynote speaker Christopher Marquis likened this introspection to a midlife crisis: “Yes, Pascual sets out an essential issue: how do we translate our research into impact in the world? What are the practical implications?”

The professor from Cambridge Judge Business School suggested a look at transition in the automotive industry, to electric cars as a way of understanding the organization dynamics behind the slow acceptance of change. “General Motors had it all figured out in the Fifties. But innovation paths are sticky and self-reinforcing – so it’s hard to shift “dirty” innovators to “clean” technologies,” Marquis noted, evoking the theories of path dependence and directed technical change in the auto industry (as researched by renowned French economist Philippe Aghion). “There is the stickiness of primary innovation imprints. Early environmental factors affect physical and human capital. For example, buying technical equipment, hiring employees, establishing cultures related to innovation – these actions and structures affect later choices through an inertial process.”

The specialist in organizational behavior concluded that path dependent factors were arguably better characterized as imprinting which focuses more on strong initial conditions and inertia. “We need to focus more on the mechanisms for path dependence. Understanding the process is vital for managerial and political decisions, so they have to be unpacked better.” 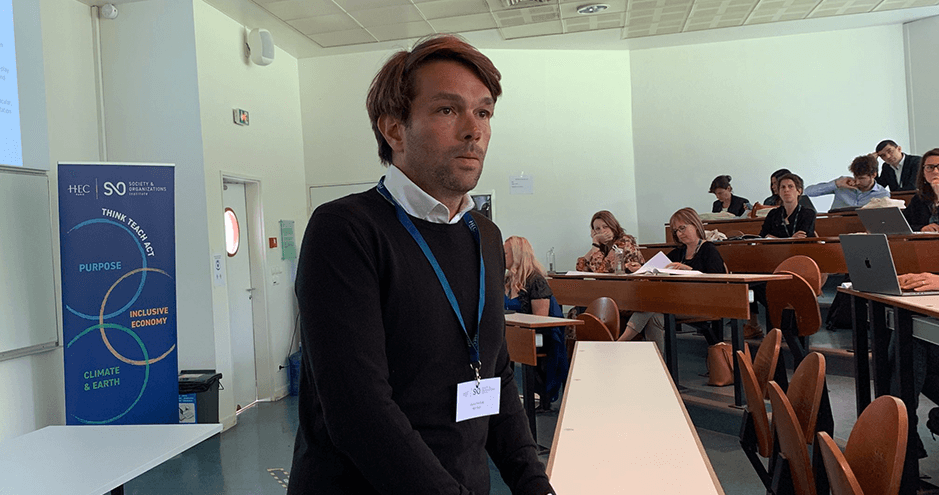 Impact of Migration on Society and Business

David Crvelin’s research concentrates on political and citizen responses in the face of crises such as the huge immigrational movements towards Europe in the 2010s. The Assistant Professor of Accounting & Management Control at HEC was one of four speakers who opened the two-day conference workshops. Crvelin is exploring the activities of social collectives set up by ordinary civilians to answer immigration flows towards and within the European Union, with a focus on Germany. “The response from private individuals with no prior affiliations was spontaneous and unprecedented, touching one in ten German citizens,” he explained. “We examined list-based structures which volunteers built to develop an adequate balance between flexibility and structure, designed to cope with the constantly evolving nature of the crisis.”

Vera Rocha of Copenhagen Business School presented a paper entitled “Why hiring refugees is more than charity”. This was a fascinating insight into what Rocha called “the strategic value of refugee human capital”, in reference to forced migrants (i.e. non-economic refugees). It was based on a sample of almost 180,000 companies in Denmark. The economist is currently investigating multi-level pathways for integrating marginalized groups into the labor market and society. She described her approach: “Firms hiring refugees enjoy higher performance than local workers, partly because of the frictions characterizing the labor market for refugees. Demand-side and supply-side constraints can give employers a competitive advantage.” However, the Associate Professor in Economics tempered these benefits as being conditional to employers providing job security and experience in hiring these refugees.

Leandro Nardi, meanwhile, focused his research on corporate responses to tragic refugee incidents in their geographic proximity: what challenges do these pose to company CSR policies, Nardi asked? The HEC postdoctoral research fellow concluded that responses “are driven by firms with higher pre-existing social performance … and are concentrated on dimensions related to employees and communities.” 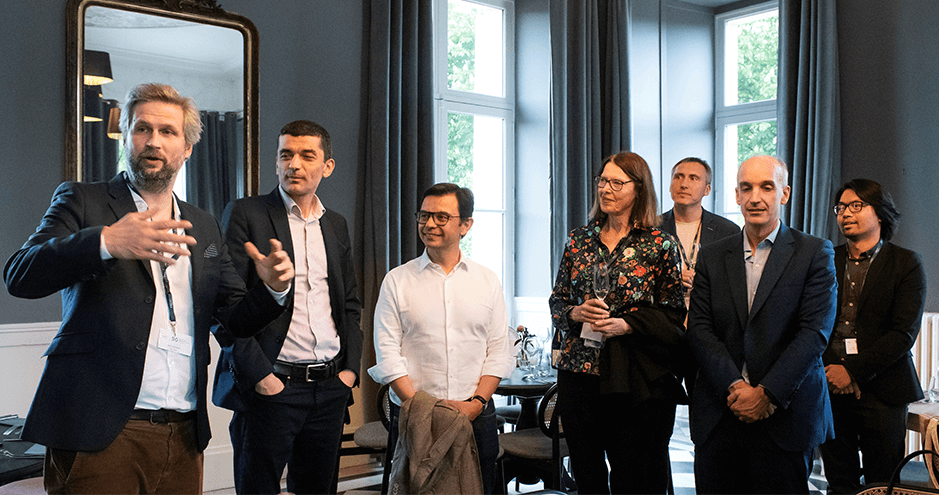 And What of Corporations and their Leaders?

Two presentations studied CEOs’ organizational and strategic context. HEC Assistant Professor Georg Wernicke, who has recently been awarded for his work on gender and ethnicity, explored the impact of gender on a leader’s ability to garner the support of his/her employees. Based on data from over 1.2 million employee reviews in the United States, Wernicke shows that female CEOs “receive lower employee approval ratings compared to male CEOs.” Michelle Weck, meanwhile, presented research from her University of Groningen team which examines how some CEOs attempt to create strategy uniqueness by expanding cognitive boundaries of an industry. This was followed by a highly pertinent presentation by Razvan Lungeanu on how members of society interpret a corporation’s action in expanding its contributions to groups of stakeholders. The Northeastern University academic confirmed that “a corporation is perceived as more socially responsible to the extent that a cause it supports is seen as unrelated to (its) core activity.”

In conclusion, the 41 academics at the two-day conference agreed the meeting had underlined the pressing need for the research community to tackle what Rodolphe Durand called “the centrifugal forces that dismember our society.” The S&O Academic Director spotlighted the contributions on the migration questions: “What a lesson received from our four first speakers on how migrants trespass not only national but also organizational boundaries! And,” Durand concluded, “what a wake-up call from guest speaker Pascual Berrone that it is here and now that our studies have to speak to policymakers.”