Diversity and Inclusion in the Workspace

The 14th HEC DiversiTalks explored how companies engage in promoting equality by hiring diverse profiles and facilitating healthy working environments. The February 27 event brought together students, academics and professionals to hear moving testimony on the challenges to diversity in the workplace. They remain as relevant as ever, despite the huge changes wrought by the health crisis. 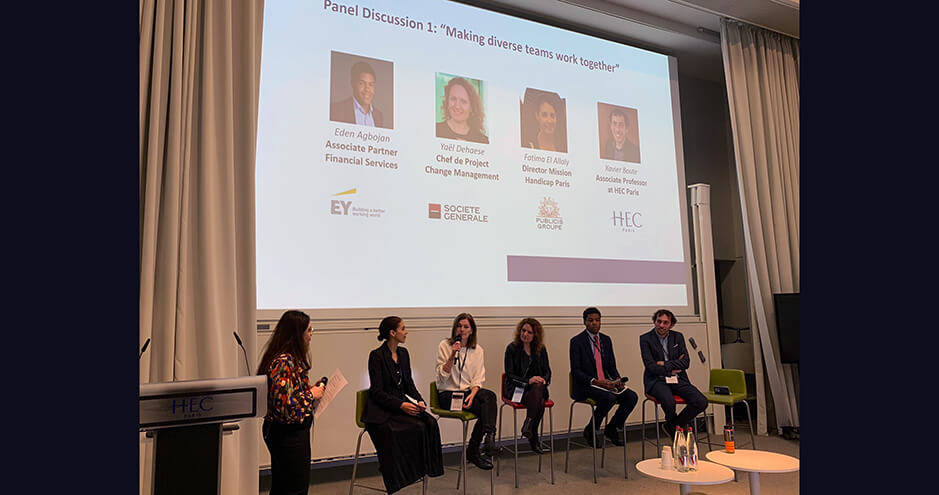 “I often start my courses with a classroom scene from the film Dead Poets Society. It might feature a seductive exchange over literature but, I ask my students, is there diversity in that class (Ed., led by English teacher John Keating)? The point of the movie is to show how each student is special and different. But, when you look at the class composition, clearly there is no diversity!” The co-organizer of DiversiTalks Matteo Winkler thus opened the 14th on-campus gathering, which, once again, sought to contribute to, and encourage, conversation on diversity. “Tonight, we have invited some outstanding professionals to share their experiences and stories about inclusion. They will explain to you what these mean as we challenge the business world to understand how they make diverse teams work together. What, for example, do inclusive leaders do to catalyze inclusion and diversity in their business environment?”

The evening-long event was backed by a plethora of high-profile companies including Bain & Company, EY, Allen & Overy, and BRED Banque Populaire. The organizers invited several articulate commentators to share their insights, such as best-selling writer Amy Plum, Handicap Paris director Fatima El Allaly, the cofounder of Hipip In Liliya Reshetnyak, consultant Filippo Gafaro, HEC academic Xavier Boute and EY associate partner Eden Agbojan. Their testimonies were frank and often eye-opening. “My hardest experience derived from the stigmatization of, and even self-stigmatization within, the gay community,” said Filippo Gafaro as he described the professional challenges of living with HIV/AIDS. “I kept it hidden for years out of a sense of shame. It needed role-models like rugbyman Gareth Thomas to come out and say he was HIV+ for me to have the courage to follow suit.”

HEC Associate Professor in Economics and Decision Sciences, Xavier Boute reminded the audience that many people live with non-visible handicaps such as bipolarity or sleep-deprivation. “The most important thing in the workplace is to know your team and their disabilities, their strengths and weaknesses, and work around them.”

Liliya Reshetnyak underlined the point through her own experience of discovering what was behind her moments of hypersensitivity and bouts of exhaustion. “Six years ago, I discovered I had a form of autism called Asperger. It was such a relief to understand what was behind the difficulties I faced at work. People with my condition miss out on much in life, while society misses out on the productivity we provide and which companies need.”

British-based IT expert, Rica Paras described the stages of her transition towards being a transgender person, which began shortly after her high school graduation. “I am very happy to be here sharing this with you because there are very few places in the formal sectors of higher education to do so. And that’s an unfortunate reflection of what we live in the corporate world where LGBT+ people are almost invisible.” Paras lauded Accenture for the space afforded to the promotion of inclusion and diversity. “We also have gender non-conforming dress-code and gender-neutral benefits and I have been able to make a greater impact as a diversity advocate.”

The World with New Lenses

Laure Châtillon, a partner and diversity leader at PwC insisted on the importance of symbols at her company, such as the rainbow and pins. “We believe that you need to make it personal to be engaged. We’ve set ourselves specific objectives and measured them, for example the number of women promoted at all levels. There are too many examples of discrimination and unconscious bias. We need to make progress, if we don’t we will have to wait until 2125 to achieve fair gender equality!” Colleague Stefano Caprara exhorted the audience to see the bright side of such debates: “It’s the sign of a society that’s in transition, dynamic and alive,” said the HEC graduate (H19) and senior PwC associate. “We are still talking to people who are staring at the world with old lenses. But this is changing: today it’s about diversity inclusion; tomorrow it will have another name.”

The DiversiTalks series began in February 2017 with a debate about political correctness. In the past three years, it has scrutinized a wide diversity of challenges in the workplace including sexual harassment, prejudice and being oneself at work.