Challenges and Opportunities in Being Oneself at Work

Hosts Allen & Overy and HEC Paris co-organized a high-profile debate labeled ‘Being Yourself at Work’ on September 18. This eighth DiversiTALKS event featured top executives from the business and legal worlds. Together, they scrutinized the economic, social and cultural benefits of an inclusive, transparent and open enterprise. 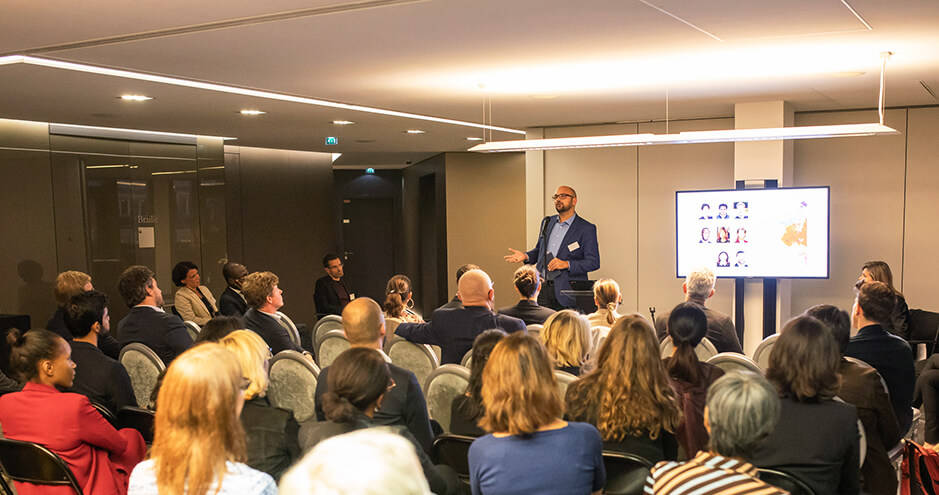 “Being yourself at work is a transversal issue touching a variety of communities, from LGBT to women and people with disabilities.” HEC Assistant Professor Matteo Winkler has consistently underlined the multi-layered nature of the debates he has helped organize since 2017. Speaking an hour before his first DiversiTALKS event in Paris, Winkler expanded: “There is an urgent need for firms and individuals to pursue policies with clients and contractors that put concrete value on being oneself. That’s to say, to be free to speak of your private life and not be ashamed – or to be shamed.” Yet, as the young academic pointed out, this urgent need continues to meet challenges in the business community. 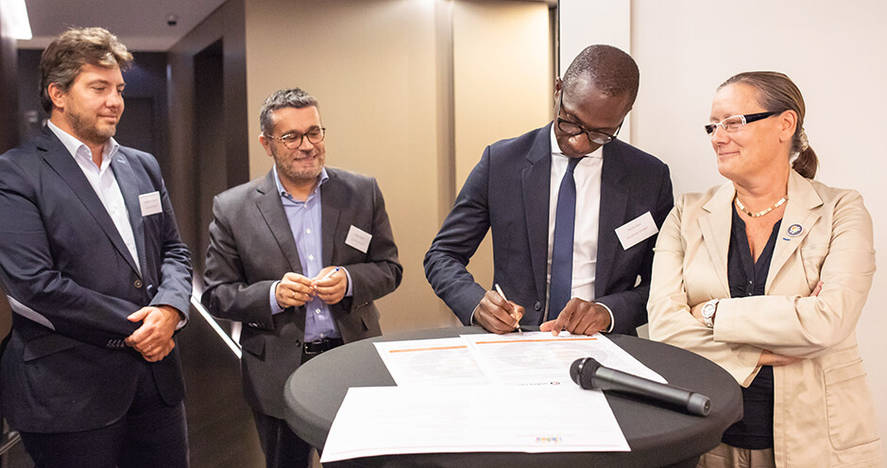 Winkler’s remarks thus set the scene for a Wednesday evening debate that culminated in the signing of two landmark charters: one on Diversity & Inclusion by the international law firm Allen & Overy and the other called “Engagement LGBT+”, inked in by a leading French homosexual voluntary association L’Autre Cercle. “This charter is the latest of a long list of commitments by my company,” said Hervé Ekué, partner of the law firm. “Reverse mentoring sessions, coaching, directives, these are just some of the initiatives we’ve implemented these past years. Do we always succeed? No. Do we keep trying? You bet we do.”

“Tonight’s conversation underlines that inclusiveness and diversity really is a business issue and senior executives are taking both very seriously,” commented Jon Miller partner at Brunswick Group (read his interview below), a strategic advisory company which founded Open for Business. This coalition of 22 global companies supports LGBT+ rights around the world. “These companies understand that providing an organization where individuals can flourish according to their merits is good for business,” he continued. “There is a ton of data proving that profit margins increase with company policies that welcome inclusion of all the communities.” Miller pointed to an Open For Business analysis which correlates data from the World Economic Forum Competitiveness Index with metrics of LGBT+ inclusion. Its conclusions show that the inclusive countries are more competitive.

The co-author of Everybody’s Business also pointed to data which reveals a correlation between discrimination and corruption: “If you correlate Transparency International’s Corruption Perceptions Index with LGBT+ inclusion metrics you can see discrimination against LGBT+ people often goes hand-in-hand with a culture of corruption.”

Miller was one of nine speakers at the debate representing companies as diverse as Uber, Sodexo and L’Oréal. Each one answered questions from HEC MBA students Amanda Moritz and Cody Overstreet on what it means to be oneself at their companies, and what status diversity and inclusion has in their respective firms.

The DiversiTALKS event also focused on legal issues surrounding the challenges to inclusion. Valérie Duez-Ruff is a high-flying barrister at the Barreau de Paris. In 2010, she founded Moms à la Barre, an association devoted to ending discrimination towards lawyers whose pregnancy has been used as a pretext to slow down their career. “We’ve helped create laws to end this ‘mom ceiling’ which has been blocking a natural evolution in a women’s professional ascension.” The 40-year-old’s engagement and actions have brought her several awards.

Yet, it was in her more personal testimony that Duez-Ruff truly moved the 100-plus audience. “I myself have a form of autism which provokes a hyper-sensoriality. Two years ago, I decided to come out with this reality, despite warnings by colleagues to hush it all up. It was a huge step because it was published as part of an Elle Magazine article on autism, in other words huge exposure. But it was vital for me to make people’s attitudes towards this illness evolve. And I was right: my clients and people in general accepted it wholeheartedly. And I achieved my goal, helping them to realize that you can be autistic and have a successful professional career in life.”

From Business School to the Workplace

More inclusion has also been a clarion call for the school’s Student Affairs Department led by Marcelle Laliberté. At the event, she urged a policy of “debate at all levels, from the university to the workplace”. Her call could also help change a phenomenon which preoccupies Matteo Winkler: “Universities can be launch-pads for more diversity and inclusion in the corporate world since the former is more transparent than the latter. Take the case of the gay community: 30% of LGBT come out in universities. Unfortunately, however, many return to the closet at work. That is because work is often seen as a cage and not a place to develop personally. What companies should see is that hiding takes energy, it provokes illness. It is therefore a moral and financial burden both to business and to society.”

Jon Miller is a partner at Brunswick Group (LINK) and founder of Open for Business, a coalition of 22 global companies supporting LGBT rights.

What was your take-home from tonight’s exchange ?

J.M. I saw how deeply people are thinking about these issues. That is quite a new phenomenon in the business world. Only a few years ago, people said ‘This is not a business issue, why are you talking about this in the private sector?’ Tonight’s conversation underlines that it really IS a business issue and very senior figures are taking this very seriously.

Brunswick and Open for Business have rallied major companies to this cause. What of the future managers and employees being shaped in business schools round the world such as HEC Paris?

Future leaders in business are also future leaders in society. If our aim is to create a world which is more inclusive and embraces people from all different backgrounds, those people are going to help to create that world. When I was lucky enough to visit institutions like HEC, London Business School or schools in the US, what I saw was a global set of students from many different countries. They gave me enormous hope for the future. I am often asked what advice I would give them. I say: “Inform yourselves, find out about the state of LGBT rights, understand equality issues and become familiar with those themes.” Opportunities inevitably emerge for getting involved and take action.

Open for Business is a coalition of global businesses. What they all have in common is they have been leaders in many different campaigns for inclusion and diversity. For example, IBM, a coalition partner, opened desegregated factories in North Carolina when it was illegal to do so. It introduced equal pay for equal work decades before it became a legal requirement in the US. They have been working on equality issues for many decades. That is because these companies understand that providing an organization where individuals can flourish according to their merits is good for business. And LGBT is on the frontline of this issue globally.

How do you think these questions should be addressed within a university campus environment?

The consistent and visible insistence of leadership is critical here. It must send out very strong messages that all populations are not only accepted and welcomed, but actively embraced and celebrated. Organizations often draw their power and vibrancy from the fact that many different backgrounds and orientations are represented. They should be celebrated. Their inclusion can be a very powerful message from the top. Something that emerged here tonight was the notion of unconscious bias. I see the power of unconscious bias training in the business community. All of us carry with us assumptions about people from different diversity groups and very often we are not even aware of these assumptions. That kind of training can be hugely beneficial.

The bottom line gives something for people to talk about, it’s not just a question of human rights. If you only talk about the latter, you are accused of cultural imperialism, Western values, ‘you’re imposing something alien to our culture,’ they say. Of course, it’s not true, human rights are universal. But you end up getting into a clash of morals and that doesn’t get you anywhere, it’s doesn’t foster a conversation. What we find is that if we can help people in government, senior figures in business and in advocacy groups, reframe the conversation and talk instead about raising levels of entrepreneurialism in the economy, fostering creative industries, attracting talented people to come, live and work there, or at least stop the brain-drain, well, these are compelling objectives.

What kind of society do we want to nurture? An open, inclusive and strong one, which is a signal that we’re open for business. Hence the name of our coalition.