Inclusive Economy: The Antidote to “a World on Fire”?

In 2020, the Society &Organizations Institute (S&O) marks 12 years of research on the notion of an inclusive global economy with the report “Inclusive Business: What it is and Why it Matters”. This third S&O report studies the roles of the private and public sphere, as well as civil society, in addressing the fundamentals of an inclusive economy and business. It is part of platform framework led by 40 CEOs in a coalition called Business for Inclusive Growth (B4IG). We talk to one of the report’s four authors, Marieke Huysentruyt. 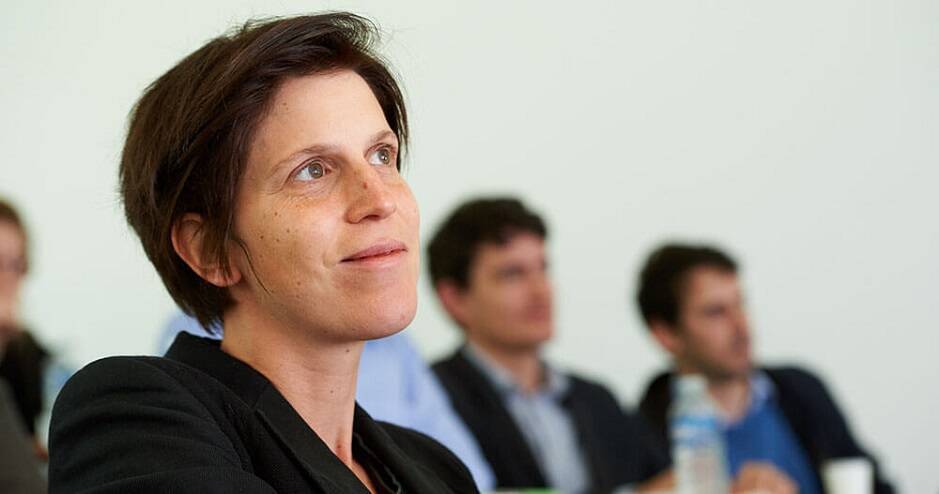 “We are living at the confluence of three crises in a world on fire,” warns Marieke Huysentruyt in explaining the underlying urgency of S&O’s 48-page report on inclusive business. “They are the health pandemic, the climate crisis and a soon-to-be-reached economic collapse,” adds the co-author.

One could argue that the S&O Institute has been anticipating such an emergency scenario ever since the Lehman Brothers’ collapse in 2008. For the Institute’s founder, Rodolphe Durand, this signaled a slow if inexorable decline of the neo-liberal model of capitalism. At present, even the world’s foremost business daily, the FT, appears to be calling for bigger governments and more equitable redistribution.

We discussed the report with HEC’s new Academic Director of the Inclusive Economy Department, Marieke Huysentruyt. She is also Assistant Professor of Strategy at the school. Marieke sums up the essential points of the December 2020 report that she co-authored with lead writer Aurélien Feix and colleagues Rodolphe Durand and Bénédicte Faivre Tavignot. 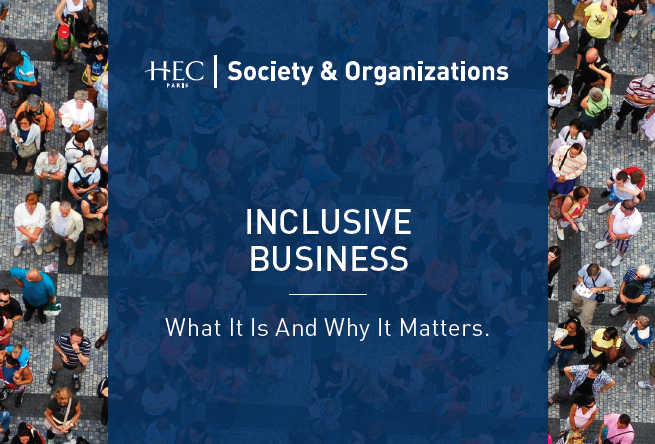 Why was it important to publish “Inclusive Economy” at this precise moment?

We are situated at the confluence of three crises just now. In fact, you could say that we’re living in a world on fire: there's a climate crisis, a global health crisis and we are on the brink of a steep economic crisis. So, inevitably, we are having to think up new innovations, new ideas, of how we can combine economic growth with inclusion and sustainability. The COVID crisis has confined our physical movement but not our imagination. I think this is the time to imagine, to innovate, to think about what a well-functioning market economy looks like, one that really embraces values like solidarity, altruism, sustainability, fairness, justice and so on. That's the big picture motivation. A report like this is important because it articulates ideas around what businesses can contribute to transform the economy, help build an inclusive economy.

You start the report by defining the terms such as inclusive business, economically included, CSR, etc. This is important, you say, because there remain certain misunderstandings which lead to some major companies and industries being reticent in becoming involved…

This was an important topic of discussion when editing the report. Some like to define inclusive business in a very broad way – the upshot of this is that it’s … well very inclusive:  every company may feel they can make a positive impact or reduce their negative externalities. However, given the magnitude of problems we face today, a bit more precision, we felt, is welcome – at  the very least to stir a debate. In this report, we decided to be more specific and really unpack the terms in a scientific way, combining insights from a wide range of disciplines, economics, sociology, philosophy, management science...  The report seeks to activate people and so we try to be precise. We also warn companies that to create effective inclusive business will require humility. It will require them to look outside the walls of their firm and find partners to collaborate with, in a very systemic way.

This report hopefully can help accelerate the mind shift that firms should go through if they want to be companies of the 21st century. It comes at a time when there’s been a major development, this coalition of businesses called the B4IG movement (Business For Inclusive Growth). This movement was mainly the product of the G7 leadership summit at Biarritz in 2019, (which cosponsored the report, ed.). It represents over 30 companies employing 3 million people and a turnover of a trillion dollars a year. These are the kind of mainstream businesses which should be targeted to create this kind of inclusive business revolution. And I’m not exaggerating by using the word “revolution”. These companies have put their shoulders behind this movement. Rodolphe (Durand), Bénédicte (Faivre Tavignot) and myself were lucky enough to attend their General Assembly Meeting, which took place a few weeks back. We saw the engagement of CEOs from many major companies, ranging from Mars to Accenture and Unilever, it was truly remarkable: all of these CEOs set aside time to restate publicly their commitment to a truly inclusive economy. This is what we need, even if it's not enough. I think these are very visible companies, they can play an educational role and they can engage in a more subtle activity: getting their peers, consumer and citizens alike to change their attitudes, to change their behavior.

Another key notion in terms of changing attitudes is to show that inclusive business can actually add value to the economy. A large portion of your report is devoted to exploring this notion: it's not a question of philanthropy, and companies do not necessarily need to take a long-term approach to enjoy profit. What are the key steps to prove that this is a real investment that can increase the profit margins?

There are some benefits that are more immediate than others. Research has shown that companies which are purpose-driven and willing to give up some profit to increase their social impact, are able to inspire and recruit people who are more intrinsically motivated. They, in turn, tend to be more productive, more engaged, more creative. So, there's a kind of positive virtuous cycle here which I think can flourish very quickly. We know that when employees are involved in these projects, their engagement increases, their job satisfaction goes up. There are a lot of good things that have immediate impact on the well-being of employees, on the productivity for the company.

However, for companies to make a strong social impact, they need to be in there for the long run, too. The research I’ve published with Rodolphe Durand has shown that it's not so straightforward for companies to really make an impact on the lives of target groups external their company, for example disadvantaged youth or low-income parents who they may well be less familiar with. In the eyes of these groups, the social initiatives that companies propose seem quite ambiguous and are complex to understand, and as a result, they don't engage as much with the services provided as one would expect. We talk about this in the report: there's no quick-fix solution and probably there is going to be quite a lot of trial and error needed for companies to gain enough trust and legitimacy to act in domains in which they are not expected to act nowadays. This is something many companies underestimate, and it requires a long-term horizon, a large investment in terms of time and budget.

The second part of the report is devoted to examples of inclusive business. Difficult as it may be to choose, which is your favorite and why?

To be honest, I can’t say I knew about every initiative inside-out before I started editing the report… so I discovered several great initiatives I wasn't familiar with. There’s maybe three topics that are close to my heart: one is devoted to social housing. Access to decent housing can be a formidable barrier, especially now with the economic crisis. We see a lot of people struggling to pay their rent, so we need models to build affordable housing. I'm also charmed by the Mobilize program, supported by Renault. (This aims to give access to new and hence reliable cars to low-income populations, ed). At Renault, several remarkable people have been very active in supporting a sustainable transition, especially during the lockdown. There is now a working group of a 20-odd people who are totally engaged in putting their ideas into practice. I would call them warriors, people who are passionate about these issues. Finally, of course, there’s the program called Malin, in which I have been personally involved (Malin strives to improve the nutritional status of young children from low-income families, by making quality infant food more affordable and offering nutritional advice. It is in collaboration with Danone, ed). I set up an experiment in Seine Saint-Denis (just outside Paris) and I think it's a great example of an initiative that is now being scaled nationwide. This is the result of 10 years of hard work, which proves that these projects are difficult to get right from the get-go.

The book finishes by saying that it's incomplete. What is missing, the four authors say, is this toolbox which explains how inclusive business works and what conditions are needed to make it successful. And that will be subject of your next report…

Yes, it’s in the making. It will be more of a step-by-step manual that would be an important complement to this report. We will be able to draw on practical experiences, and deepen our collaboration with the Action Tank Social & Business, who have been working on the ground for years. At the same time, there are interesting insights that our own academic research highlights, some of the conditions necessary to help companies enjoy success with inclusive economy initiatives. When we bring the practice and the science together I think we will have a powerful cocktail. We will be able to create an interesting overview of all the different elements that come into play - without being over-simplistic! 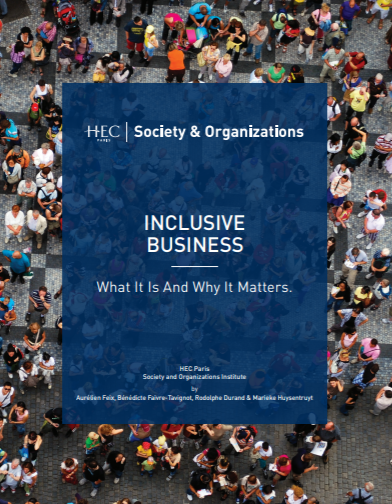