The Uncertain Promise of Human Rights in Sports: Understanding the Caster Semenya Case

For the 32nd Olympic Games, one of South Africa’s modern icons, 800-meter champion Caster Semenya, will not be making the trip northwards. She has been barred from the Tokyo Olympics where she had hoped to defend a crown she won in 2012 and 2016. We discuss with Professor Matteo Winkler the legal, sociological and ethical implications of the Caster Mokgadi Semenya v. IAAF (now World Athletics) case. World Athletics’ regulations target female athletes like Semenya who are born with naturally high levels of testosterone, a characteristic that was labelled first as “hyperandrogenism” and then as “difference of sexual development”. Winkler and fellow academic, Doctor Giovanna Gilleri from the European University Institute published a 40-page study deconstructing the narratives surrounding the case and reflecting on the relationship between the law of sports, politics, gender and bodies – and the West’s sometimes uncomfortable position on femininity in the Global South. 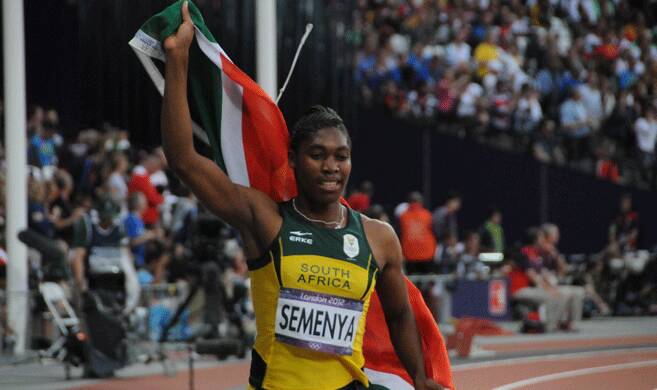 Daniel Brown: Matteo Winkler, you have published a paper entitled “Of Athletes, Bodies and Rules: Making Sense of Caster Semenya”. It’s been accepted for the Journal of Law, Medicine & Ethics (forthcoming in winter 2021). Clearly, you’re tapping into a subject that has touched a lot of people. In South Africa, for example, the government is strongly backing her case in the European Court of Human Rights. What first brought your attention to her case?

Matteo Winkler: The first time I dealt with this case was when I answered a call for papers at the EUI in November 2019 and I had to study for the award and the related litigation. What I found to be absolutely amazing was that the case touched upon many of the subjects that I’ve been studying in the last few years, such as gender binarism, sexual orientation and gender identity. The case synthetizes all the subjects that I’ve been studying: the application of law to the bodies, the relationship between body and rules, how we conceive our bodies as machines – a very good metaphor in sport. Also, how regulation can change the perception of gender, gender identity, sexual orientation and, in this case, as it applies to sports. My coauthor, Giovanna, was priceless in helping me understand all these aspects.

A Body that Is in Pain

DB: How does your article compliment and enrich the debate?

MW: Our article is original in the sense that we look at the case from the angle of the narratives and try to deconstruct them. The case is a very difficult one to break down: Caster Semenya is a woman and, as such, was eligible to run within the women’s category by World Athletics. She won in 2009 in Berlin and her body was immediately subject to hyper scrutinization. These monitoring actions took place because of the way she looks. She’s muscled, tall, she doesn’t have much breast and a body outline which, according to certain standards, appears to have the shape of a man’s. For the Court of Arbitration of Sports, however, there is no doubt about her being a woman.

This reflects how our bodies are in fact subject to scrutiny and social control. The particularity was that Semenya was not within the categories of transgender or intersex which had been legally considered by the sport authorities. Her striking victories generated debate and World Athletics wanted to regulate cases like hers. It implies that, if you have too much force in your muscle and in your body, you shouldn’t compete with women who are considered, through their body shape and body nature, not as strong as men.

We argue that this case creates four narratives which, in the future, will drive the lives of many people resembling Caster Semenya.

We argue that this case creates four narratives which, in the future, will drive the lives of many people resembling Caster Semenya. The Court of Arbitration said that when World Athletics is ruling on an athlete’s eligibility, it is not deciding about his or her sex and gender. For them, it’s not determining whether Caster Semenya is a man or a woman, it’s simply deciding on her eligibility in terms of testosterone level. But the problem is that, at the end of the day, the tribunal says, yes, Semenya is a woman – which is kind of contradictory, as regards the premises of this reasoning.

The second narrative concerns testosterone. The question here is whether testosterone is or is not an accurate predictor of athletic performance. The tribunal says yes. All the scientific evidence brought in by the tribunal says yes. But, in fact, there are just a couple of studies that connect the level of testosterone with athletic performances. We argue that these studies have been tainted by scientific bias and by inaccurate methodologies and these inaccuracies and biases have been highlighted by other researchers which we summarized in our article.

The third narrative is that the required testosterone suppression treatment is safe and harmless for an athlete’s body. But this is simply not the case. World Athletics regulations impose athletes with above-average testosterone to undergo testosterone-suppressing treatment, which is very painful and has non-negligeable side effects. In fact, you are obliged to compete with a body that doesn’t respond any longer to your own actions. It is a body that is in pain because of this treatment and of course it is a body that cannot be efficient in practicing the sport of one’s choice.

Finally, we tackle the most difficult of these narratives, which reflects the argument that the Semenya case will protect women. The arguments advanced by scholars is that, basically, if you exclude Semenya from eligibility, you allow other women who are weaker than her to compete, and this will enlarge the population that could compete.

The real question here is at what cost do we allow the majority of women to run by excluding a minority of women based on their biological characteristics?

Now, the real question here is at what cost do we allow the majority of women to run by excluding a minority of women based on their biological characteristics? This is a real problem.

DB: Many, including yourself, have made parallels with Saartjie Baartman. Your references to Bourdieu and other major sociologists suggest that Semenya is the latest example of “anti-Black, anti-South, anti-gay, colonialist-like prejudice”. Could you elaborate?

MW: Saartjie Baartman was born in 1789 in South Africa and was brought to Europe to be exhibited, often completely naked, for years. Her body was systematically examined by anatomists, zoologists and physiologists. She lived until 1815, then her genitalia and brain were excised and preserved in formaldehyde in Paris. It was only in 2002 that her remains were returned to South Africa. So, if we allow for the different geopolitical and historical contexts between Semenya and Baartman’s cases, what remains is the fact that the physical aspect of bodies has been of interest, especially in Western countries.

Those from the Global South are something exceptional and worthy of scientific interest, as if these bodies come from another planet. And in fact, the problem of hyper scrutinization is very well known in sociology especially when we talk about the relationship between body and space. We find this in our times: Black Lives Matter, for example, where policemen target African Americans because they are perceived to be out of their place in certain context. So, we find this relationship between body and space in both cases of Baartman and Semenya.

The idea is that we dehumanize the black body and we portray it. When I say “we”, I’m talking about Western societies.

The idea is that we dehumanize the black body and we portray it. When I say “we”, I’m talking about Western societies. We portray it as dangerous, as fearful and at the same time full of fascination, something that creates surprise. The way Baartman was treated, literally cut into pieces and her pieces preserved to be seen by the public is very much similar, metaphorically, to what Caster Semenya - who happens to be from South Africa, and who happens to be black -, is suffering right now.