In September 2019, the European Central Bank (E.C.B.) shifted its forward guidance on rates from short-term calendar-based type to state contingency. This is a form of guidance that relates directly to the state of inflation rather than a specific date. HEC Associate Professor Gaetano Gaballo, argues that this is a positive first move in removing ambiguous policy signals, although more is needed to spur inflation expectations. Gaballo is currently on leave from a post of senior economist at Banque de France after having served as research economist at the E.C.B. 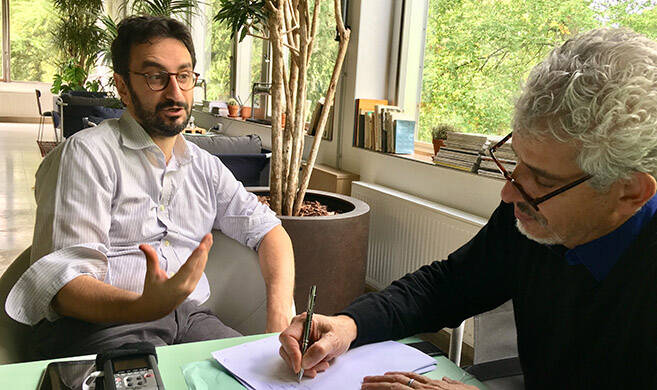 You have recently written three research papers linked to the kind of monetary economic and macroeconomic debates at the heart of the E.C.B. decision in September. First, could you briefly tell us what forward guidance is and how it can help central banks to stimulate economic activity when interest rates are near zero?

These days you cannot move the interest rates further down. But you can declare that when you are able to do so, you would raise them very, very slowly, much slower than you would do in normal circumstances. This is what Forward Guidance is about. If market operators believe in this commitment, they will be induced to borrow from that distant future and spend today. It is a way to promise a more accommodative stance in a future when it will become feasible. However, feasible does not mean necessarily optimal. This generates a tension: people must believe in your commitment today. This is why forward guidance policies require strong credibility.

Why do you believe this E.C.B. move towards more state contingency forward guidance is a much-needed change?

Through the lens of my research, this is a good move, although it could have been even better. Up to now, policy was data-based with a relatively short-term horizon. The E.C.B. was a follower of what the market was already thinking and was unable to surprise the market with a long date. The message of most of my research on the topic is that this weak type of guidance is worse than no communication at all especially because of the use of a date as main guidepost.

Date-based communication can create ambiguity because people speculate on the reason behind the choice of a specific date.

As I write in one of my papers, co-authored with HEC Professor Eric Mengus, date-based communication can create ambiguity because people speculate on the reason behind the choice of a specific date. Policy-makers say they are keeping rates very low to provide more accommodation. But people may think the long-term policy with distant dates is just policy to disguise an economy that is so bad that there is no other option. Thus, a policy designed to foster optimism can produce excessive pessimism since people will think that the rates are low not because the central bank wants to be more accommodative but because the economy is so weak that this is the only option left.

The title of that paper, that you co-signed with HEC colleague Eric Mengus, is “Forward Guidance and Heterogeneous Beliefs”: Why talk about “heterogeneous beliefs”?

When we say “heterogeneous” in the title, we are referring to the difference between analysts who think that it is more an accommodative stance, so they have faith in the good intentions of the bank, and others who think instead that it is just a signal that the crisis is longer. Our article has an empirical section in which we look at the data and we prove that some forecasters in the US were polarized between these two categories. Some became optimists and others were more pessimists.

The message from that paper is complementary to the two other papers of mine, in which I argue that speaking has costs associated to disclosure: more information does not always mean less uncertainty. In my recent publication co-authored with E.C.B. researchers I show international evidence demonstrating that when central bank statements are data-based with a very short horizon, yields from treasuries in two years’ time correlate much more with macro-news than without any communication. This is surprising because as the central bank gives guidance we should observe that markets rely less on macro news to forecast future rates. This is indeed the case with stronger forms of forward guidance: longer calendar-based or state contingent. We conclude that with the weak form of guidance the market may be more confused than without any: this is why they may react even more strongly to macro-news! For these reasons, the recent E.C.B. move towards more state-contingency is very good.

The way to convince people that there is a commitment to be more accommodative in the future is by stating explicitly that the bank could tolerate a certain deviation above that 2% inflation target.

Nevertheless, margins of improvement are necessary. It is still not clear if the convergence of inflation to the target of less than 2% inflation rate the EU has set itself can occur from above - i.e. with a temporary overshooting above 2% - rather than strictly from below 2%. This can make a difference because the way to convince people that there is a commitment to be more accommodative in the future is by stating explicitly that the bank could tolerate a certain deviation above that 2% inflation target. It would be temporary, a limited time of around a year, 18 months. This would be an effective approach designed to stimulate inflation expectations today. It could be a way to foster optimism of the market on the accommodative stance that the central bank wants to guarantee. This is not currently being done with sufficient strength, mainly because of political problems inside the Board – we know there is a strong lobby against any inflationary pressure.

Are there precedents to such measures?

Oh, there is nothing exotic in this: the US Fed did this in December 2013. It explicitly said it could tolerate 0.5% above the long-term target for inflation. They were sensitive to advice from the research body in the States. In general, the Fed is much more reactive to insights from the academic debate than here in Europe. This is partly because of the training of top managers of the Fed, who are mostly trained economists and understand academic debate quite well.

In general, the Fed is much more reactive to insights from the academic debate than here in Europe.

Then, there is the issue of governance in Europe. The E.C.B. lacks governance because we do not have an EU that is strong enough to be a counterpart to monetary policies conducted by Europe. It’s mostly a difficult aggregation of country-based preferences, which makes the data-making process much longer and politically polluted. We should be more reactive and take more risks, make strong statements.

The E.C.B. lacks governance because we do not have an EU that is strong enough to be a counterpart to monetary policies conducted by Europe.

The weak form of governance we have had until now means the EU does not and cannot take any risk when by nature they should be the one that should take more risks when needed - as the Fed did in some circumstances in the past..

Are you working on a fourth research paper on this topic?

Yes, I am beginning to reflect on extending my focus on reducing uncertainty through communication. There are many dimensions to uncertainty; it can be about rates, inflation, future growth. In other words, there are different forms of communication which can imply different trade-offs. For example, when I make a strong statement about the horizon with a date for the interest rate to be zero at some horizon, this is a very strong message about where the rates will be. But it is vague on where inflation and growth are expected to be at that time.

If instead I chose to link directly the evolution of interest rates to a given pressure like inflation or growth, this is more of a state-contingent way to communicate and is a stronger message about where we expect the economy is going, but not where rates are expected to be at that time. I hope to explore this trade-off and quantify it. The project is in its infancy, but I am likely to coordinate it with E.C.B. staff and use part of the database we already have.