TV series consumption habits in the era of Netflix: How young adults embrace and protect themselves from ATAWAD TV watching

How do young adults feel about television streaming and how does this feeling affect their watching of television series? How do those consumers embrace and protect themselves from the possibilities of ATAWAD (anytime, anywhere, any device) TV watching? 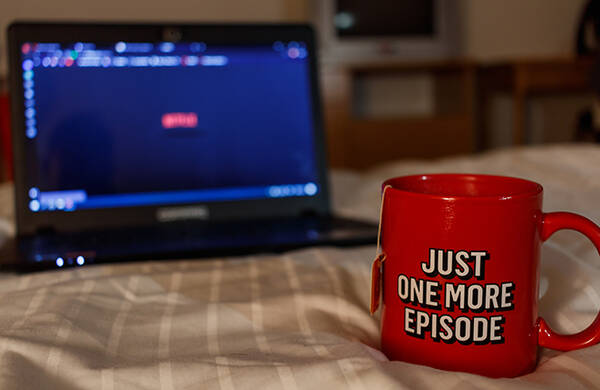 The habit of watching television series has greatly evolved in recent years among young adults. In the 1990s, young people dedicated much of their time to watching terrestrial television, directly broadcast by traditional television networks. Nowadays, young adults often watch series on digital platforms such as Netflix or Amazon Prime Video.

In the U.S., 60% of young people watch their favorite shows on these online platforms. These platforms allow users to watch whatever they want, whenever they want. Some scientists even predict that traditional television is approaching retirement.

The online platforms have precipitated a major change in consumers’ tv viewing habits. In our article in the Journal of Business Research, we tried to respond to the following question: How do young adults feel about television streaming and how does this feeling affect their consumption of television series?

To better understand this evolution, we conducted 21 in-depth interviews with young adults who regularly stream television series. Our sample consists of 21 "emerging adults", age range 21-33 years old (without kids at the time of the interview). We had 11 nationalities in our sample, but all informants resided in either the UK or France.

Our study demonstrated two major changes. Firstly, some felt that the loss of the structured format of television had negative effects and led to bad habits such as “binge-watching”. Some also explained that for them, “binge-watching” was almost an uncontrollable addiction. Some felt that they were guilty of time-wasting after spending hours and hours binging on their favorite programs.

Some felt that the loss of the structured format of television had negative effects and led to bad habits such as “binge-watching”.

Secondly, many young adults condemn the loss of social interaction, because the consumption of series in a non-linear way (i.e., on-demand) makes viewing with others more cumbersome to organize. Additionally, these consumers have difficulty discussing their series with friends who follow different shows or are not watching the same episode.

Restore the structuring role of television

Our research highlights how some consumers respond to the changing television-watching environment by adapting their new habits and restoring the structuring role of television.

Some consumers respond to the changing television-watching environment by adapting their new habits and restoring the structuring role of television.

Some people choose to ration their consumption of TV series. Some even stop using online platforms in order to return to the traditional and more structured format of broadcast television. Others associate their viewing with particular tasks for example; when cooking, eating or ironing, thus offering a defined context and regular pattern for their TV viewing habits.

In order to create social links with other fans, some viewers have quit using online streaming services such as Netflix and now prefer to watch live TV; they use twitter simultaneously to engage in the social discussion of the program in real time.

Businesses such as Netflix could create specific platforms, only accessible for the episodes that users have already watched.

From a managerial perspective, businesses like Netflix or Amazon Prime Video should find ways of facilitating discussions on their platform among viewers who are watching at the same time but are not in the same place geographically. This type of innovation would facilitate the development of social engagement with series. In addition, many interviewees mentioned that they avoid social networks for fear or ‘spoilers’ (internet comments which give away part or all of the story or plot).

Businesses such as Netflix could create specific platforms, only accessible for the episodes that users have already watched. This would give users a chance to socialize with other fans without the risk of  being “spoiled”.

Kristine de Valck's research and teaching focus on how the Internet in general and social media in particular have changed consumer behavior...