The HEC class on Inclusive & Social Business organized a meeting with Lucile Cornet-Vernet, founder of La Maison de l’Artemisia, as part of their work on inclusive models to provide access to health for all. 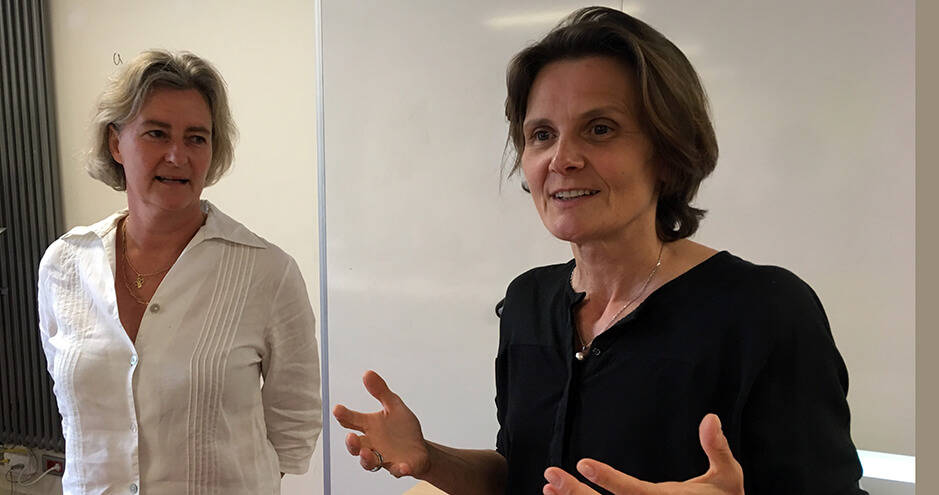 Lucile Cornet-Vernet shared with the 40 students the benefits and perils of instigating an anti-malarial therapy based on herbal tea infusions. This therapy has divided the scientific, health and pharmaceutical communities.

In terms of health, the class sought to confront different perspectives and approaches: they began by inviting a representative of “big pharma”, Jean Scheftsik de Szolnok, President of Boehringer Ingelheim France. This company is one of the world’s top 20 pharmaceutical companies. He explained how the group is exploring more inclusive business models through the Making more health initiative and a strong partnership with the Ashoka Network. The HEC students and the course director Benedicte Faivre-Tavignot then invited a social entrepreneur, Lucile Cornet-Vernet, involved in an alternative model of treatment through a non-profit association called Les Maisons de l’Artemisia.

When in 2012 Lucile Cornet-Vernet first heard of a treatment based on a sweet wormwood plant with a strong sage odor called Artemisia annua, little did she realize she was beginning an epic journey to fight against one of the planet’s biggest killers, malaria. This French orthodontist discovered the years of research by Congolese scientist Dr. Jérôme Munyangi (more of this later). It inspired her to forge a global network of researchers, agronomists, doctors, farmers, NGOs and volunteers to instigate an alternative to the chemically-based medication sold by pharmaceutical companies.

Lucile Cornet-Vernet was invited to share with HEC students her experiences at the helm of the association she founded, La Maison de l’Artemisia. “Malaria is one of humanity’s major challenges, affecting the 3 billion people who live in areas infected by this deadly disease,” she told the class. “I’ve come to share with you not only our fight to bring an affordable and effective treatment to your attention, but to invite you to join us. We need high-caliber students like yourselves to help us better manage our initiatives.”

The herbal infusion is not without its critics, however. While the World Health Organization backs an artemisinin-based combination therapy (ACT) derived from the plant, it did not recommend the use of A. Annua plant material, “in any form, including tea, for the treatment of the prevention of malaria”. The opinion was shared by other French scientists.

This has not stopped the efforts of Lucile Cornet-Vernet. The Artemisia plantation in the Porto Novo diocese, Benin, is one of 42 Maisons de l’Artemisia she has established since 2013. These are based in 20 African countries in a network which is set to expand to over 60. In Benin, around 150 people grow, package and sell the herbal tea at 1,500 FCFA or $2 a bag. That is around four times cheaper than traditional anti-malaria medication like ACT recommended by WHO. “Which, as you might imagine, has not gone down well with the pharmaceutical companies,” she told the students. The author of “Artemisia: a Plant to Eradicate Malaria” went on to chronicle a long campaign of denigration and attacks she and fellow-researchers have experienced since the 2013 opening of her Association’s first Maison in Senegal. “While it is accepted in the US, Germany, Great Britain and China - the country where it has been used for 2,000 years to treat malaria,” she continued, “Artemisia annua remains condemned by the World Health Organization and banned by countries like France as “inefficient and irresponsible”. Meanwhile, however, studies show that the ACT combination, is less and less effective.”

The controversy pitting Artemisin advocates and established organizations like the WHO and France’s influential Académie Nationale de Médecine is at the heart of a blistering documentary by Belgian filmmaker Bernard Crutzen, “Malaria Business”. Broadcast by France Ô, RTBF and France 24, the 70-minute film highlights the battle by Congolese Doctor Jérôme Munyangi to elucidate the potential of this perennial. For over a decade, the scientist has explored the potential of an infusion combining the annua and afra variations of Artemisia.

However, in the course of his work Munyangi has been poisoned, arrested and put in jail in his native DRC. The assaults have forced him to flee and request political asylum in France just days after the HEC exchange. “There has been a vicious campaign against the propagation of his infusions in Jérôme’s homeland,” Cornet-Vernet admitted to the startled class. “And, in a milder form, this resistance is something we have had to confront here in France, too.”

Some students expressed surprise at this institutional reticence to use the plant-based remedy. “Is it not because your experiments are small-scale and not following the strict protocol?” challenged one MBA student who is himself a pharmacist. “What interest would major health organizations like the WHO or the Academy have in blocking such a remedy?” fired an MSc student. The speaker patiently answered each question: “Two of our six experiments have been published by the leading medical review PhytoMedicine (of which Cornet-Vernet and Weathers are two amongst 13 co-signatories – Ed.), following extensive, large-scale trials in Kalima, DRC, one of the world’s most malaria-infested areas,” explained Cornet-Vernet.

“This is like a dream come true,” Cornet-Vernet concluded to enthusiastic applause. “I have been committed to this objective since I first heard about Artemisia back in 2012. Already, this summer, the Rwandan authorities will be implementing Artemisia-based campaigns in a drive to be the first sub-Saharan African country to totally eradicate malaria. I’m convinced that, with your help, this will be the first in several victories over this deadly pandemic."