Nussenbaum: “Success is Like Scaling a Mountain: There’s Always Another Peak to Reach”

On October 6, Mirakl cofounder Adrien Nussenbaum (H01) shared some secrets of his phenomenal success with HEC Paris students. The day also saw him share center stage in the annual HEC Foundation evening. On top of these exchanges, the successful entrepreneur was on the campus to unveil his donation to the school: €1 million to develop “Imagine”, an ambitious fellowship program for students from war-torn countries. 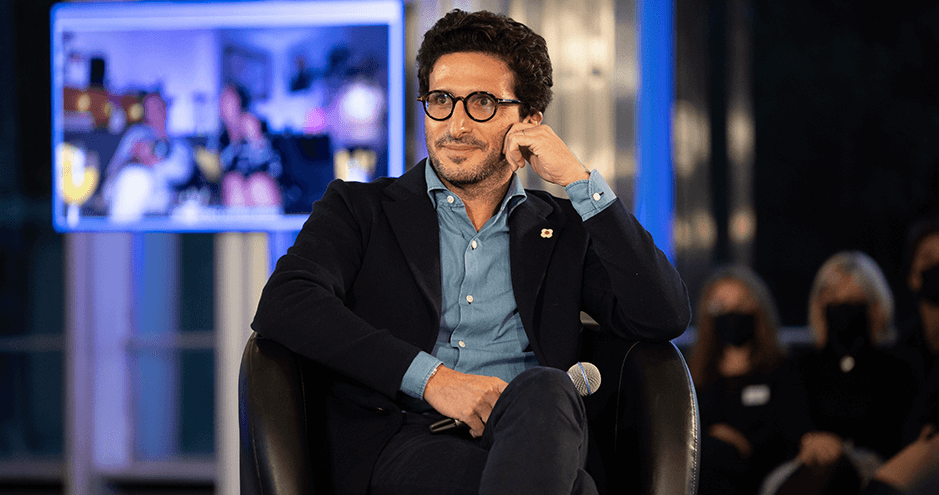 In his rise to business success, Adrien Nussenbaum has never lost sight of his roots. “I was marked by World War II and the way it impacted my family, my values and my outlook on the world.” It was, he said, one of reasons for creating the Imagine Fellowship program.

Speaking to a full house at the annual HEC Foundation gathering, Nussenbaum shared further insights into his decision to support future leaders from war-affected countries to integrate programs at HEC Paris. “On top of my personal reasons, this Fellowship is the fruit of exchanges during the COVID-19 lockdown with friends in the Foundation. I hope others from the business community will join this initiative. Let’s be naively optimistic in our hearts of entrepreneurs. It’s not always easy, but we can try. After all, life’s short, we might as well try to do something that’s, well, good.”

Such down-to-earth modesty characterized Adrien Nussenbaum’s earlier intervention in front of students fascinated by the 44-year-old’s unparalleled success with Mirakl. In the Bellon Amphitheater, Nussenbaum entertained them with frank insights into his 17-year involvement in e-commerce. “It’s been a rollercoaster ride and not just about the success of our fundraising drive last month,” he said. This was in reference to Mirakl’s remarkable campaign raising $555 million of seed money, a national record. “Our growth has put a huge amount of pressure on my shoulders! The more we grow - 71% this year alone - the more I feel it.” But the entrepreneur was quick to defend his choices: “My partner, Philippe Corrot and I, are on a mission. Our vision is expanding as quickly as our turnover. But it’s like scaling a mountain: you think you’ve reached the top and you see another peak you want to reach.”

Post-rationalization is the Way Forward

This didn’t mean the mercurial businessman has not fallen down a couple ravines since he began his career in the late Nineties. “Failure is part of the game. Being an entrepreneur is about taking risks and decisions. My approach is to start something and think later. For me, post-rationalization is the way to go. Thanks to my mistakes, I learnt about myself.”

Student co-organizer and co-moderator Bruno Heckel turned to the planetary growth of e-commerce which, he said, “is becoming more and more democratic.” “How do you explain this growth? How do you see your future in this market?” he asked. In answer, Nussenbaum returned to his initial forays in the sector: “At the start, no one in France believed in it, saying that clients would never buy medicine, books or trips on the Internet. Well, that’s bullshit!” he said, “The French love to gripe, that’s just the way we are.”

This didn’t stop Nussenbaum from investing his operation in the country’s unique workforce. If Mirakl is present in over 30 countries, its heart and mind remains in Paris and Bordeaux. With its relentless expansion, the CEO hopes to double his collaborators from 500 to 1,000, including 300 engineers and dozens of developers, in France. “France is a wonderful place to work. It’s a relatively small market but succeeding here is all about people. Just look at companies that take off as soon as they change their CEO. I love entrepreneurship here, crafting narratives and having people join along the journey.” 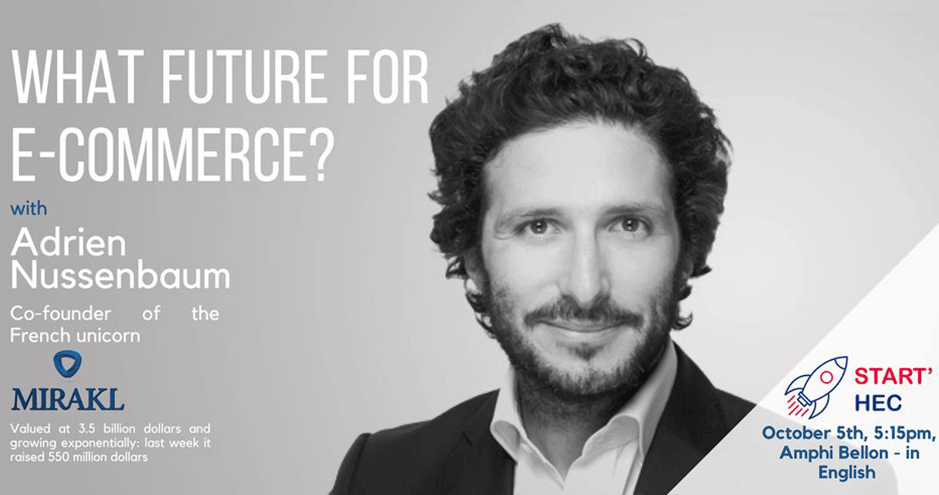 But Nussenbaum issued a warning: “Entrepreneurship is a very tough profession. So here are two lessons I’ve picked up so far: first, be accompanied by someone with a similar drive. Second, choose your partners very well – that’s hard because, often, you only find out about their true character in a moment of crisis. With Philippe, I’ve had two clashes in the 17 years we’ve known each other.” The results of their collaboration are unequivocal: Mirakl is valued at $3.5 billion and, on home turf, is challenging the global giants like Amazon and Ali Baba. Which brings Nussenbaum to another strongly held conviction: “Who amongst us wants to live in a world where these business superpowers decide everything we do?” he challenged the students. “That’s Orwellian! For us consumers and entrepreneurs, we must refuse this massive domination of digital giants. If the likes of Amazon continue to dominate, we are 100% responsible,” he ended, to applause.

Later, Nussenbaum shared his abiding memories of his years at HEC Paris: “They were memorable years. If I had one regret, however, it’s that I did too much. I was running all over the place. Nevertheless, it was a great opportunity for me to try things out, especially in the leadership department. I’m not just talking about the education side. I was also challenged in theater and in football. That’s where I learnt all about solidarity and thinking out of the box. It helped me learn this about myself, and it’s served me ever since.”

These qualities are echoed by Manuel Dias de Graça. The international business adviser for Amazon writes on Nussenbaum’s LinkedIn page: “When I think about Adrien, the phrase that comes to mind is that he is ‘a leader that will get his team and company from where they are, to where they have not been; he is efficient.’"  Coming from a rival company representative, this is no mean compliment.

Nussenbaum’s exchange with students came shortly before a memorable evening for the HEC Foundation. The school’s alumni made up for last year’s cancelled gathering with a high-pedigree list of speakers. Moderated with professionalism and humor by the Foundation’s Executive Director, Delphine Colson (H.94), there were moving testimonies from the likes of Olivier Sevillia (MBA.90), Adrien Couret (H.07), Bénédicte and Kévin Guénégan (H.03) and Bernard Ramanantsoa (MBA.76). But arguably the most touching moment was delivered by the testimony of Yasmine. The 2015 graduate described the pivotal role the Foundation played in opening up the doors to her career: “Going to this school was like going to the moon. I’m from a modest family in Argenteuil and it was simply inconceivable to come here. The only way I made it was thanks to the financial and moral backing of the Foundation.” Coupled with the courageous support of her mother, Yasmine was able to gravitate through the years of Prépa and engineering school before enjoying three years at HEC and one year at Polytechnique. With barely contained emotion, she described the exhilarating years at the business school. And also her return home: “Sometimes circumstances are hard. I go back to my childhood neighborhood, in the northwest outskirts of Paris, and help pupils there who are struggling. I tell them you have to give your all and, you’ll see, guardian angels will come to you.” Spreading her arms towards the silent audience, she concluded: “Your actions can change lives, childhood dreams can become a reality thanks to you. And I thank you for this.”