The Perils and Promises of AI and Robotics

For the fourth S&O’s Annual Conference, HEC academic Mitali Banerjee organized a high-caliber conference on the impact of AI and robotics on work and society. Participants enjoyed lively debates led by representatives from the business community, research centers and international think-tanks. 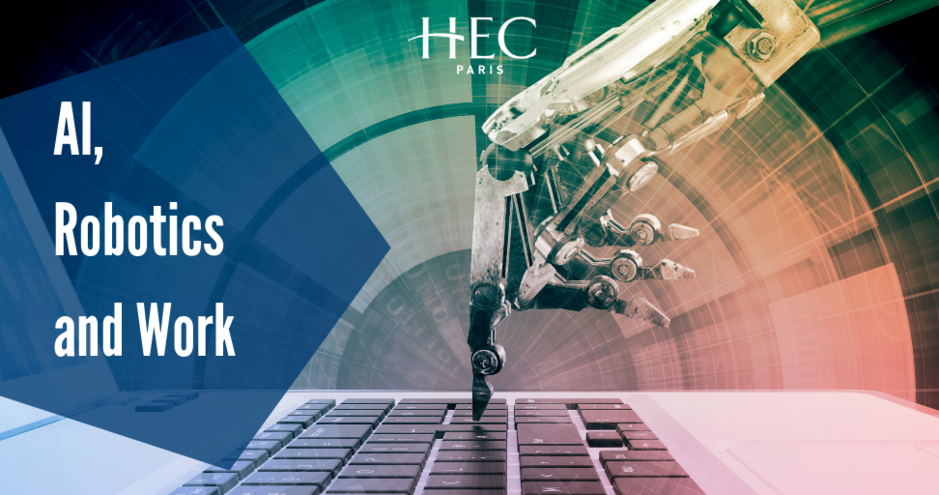 “The development of full artificial intelligence could spell the end of the human race….It would take off on its own, and re-design itself at an ever increasing rate. Humans, who are limited by slow biological evolution, couldn't compete, and would be superseded.”

“Right now, we’re living in the inhumane age and the human age is about to come, but we’re going to need assistance to get there. And that’s why I’m optimistic about artificial intelligence.” 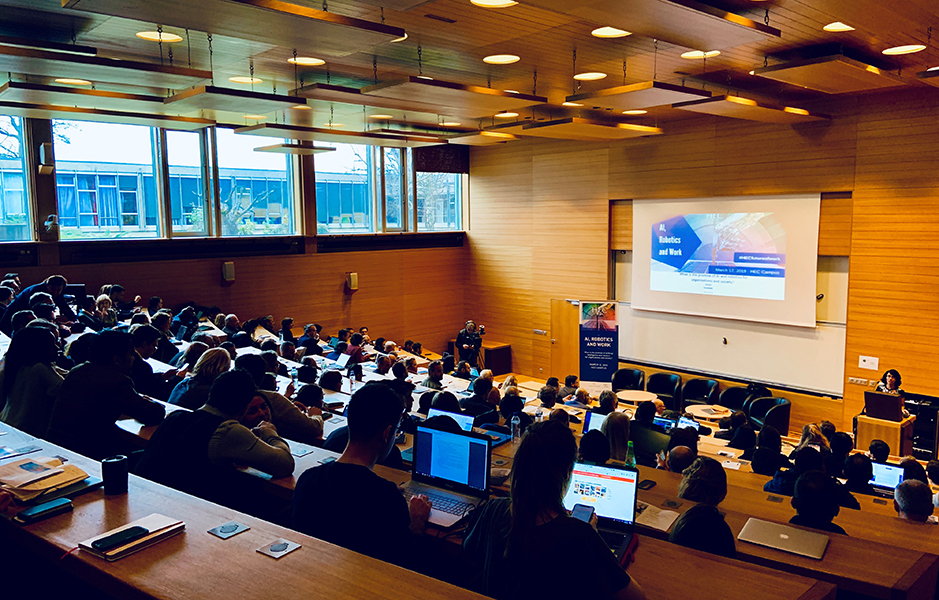 These two visions of AI reflect the theme at the heart of S&O’s March 12 conference held on the HEC campus. “AI and robotics offer substantial promise, but are wrought with  perils,” declared conference co-organizer Mitali Banerjee, in an opening speech which set the tone for six hours of engaging debate. “The impact of AI and robotics is not a technological fait accompli. Rather the promise and perils [of AI and robotics] depend on the social structures we put in place. They depend on the choices we make in structuring our organizations, markets, regulations and governments”. A packed auditorium of over 170 attendees warmly applauded the professor in strategy and business policy who illustrated the quantum leap AI has achieved in fields as diverse as medicine – with its use to diagnose retinal diseases – and the arts – where Banerjee herself uses it to measure novelty of fine art. But the researcher also highlighted its threats to jobs, privacy, and equality. “How can we harness this powerful technology to benefit society collectively?” she asked. “How can we re-define our social structure to realize the potential promise of AI and robotics for the society as a whole?”

The three panels sought to provide proposals and share experiences to answer Banerjee’s questions. Participants followed a trio of 90-minute discussions entitled “Impact of Robotics and AI on the Labor market”, “Challenges and Opportunities” and “Organizational Structure and Governance”. “It was stimulating to hear from company representatives themselves how they are applying and developing, making it visible to consumers,” acknowledged Daria Morozova who followed Panel 1. The Russian Ph.D. student at HEC is currently using a robotic cat to explore the interaction between humans and non-human agents. “Testimony by senior representatives from firms like KPMG and EDZO.ai shows that it’s not the perfect instrument at this stage. There should be more cooperation between providers and consumers in order for algorithms to be more successful.”

EDZO.ai co-founder Shirine Maher (H16) has been using an AI powered Virtual Coach to prepare staff for emergencies and strengthen sales drives. “It’s urgent for companies to create new business models which integrate AI and robotics,” she told those attending the “Challenges and Opportunities” panel chaired by HEC Professor Sangseok You. The Alumni from the HEC Executive MBA program chose an audacious comparison between the AI threshold society stands on and the Roman armies which swept through much of Europe over 2,000 years ago. “Successful as they initially were, the problem with these armies was that all the orders came from top-down. They were very rigid, provoking resistance and lack of evolution or new ideas. One small village in Brittany resisted because it was different: it was able to mobilize a cross-section of people, all of whom shared, collaborated, created. There was diversity within the ranks, it fostered innovation, trust, solidarity in a hostile environment. With AI, industry also needs to show it can think out of the box, create links between very different domains and unite different skills to resolve very complex situations. This knowledge-sharing is the key to using the AI tools and to very quickly create value for companies. It’s what we do with our Virtual Coach.”

Interdisciplinary CNRS researcher Paola Tubaro concurred. The economic sociologist specializes in the links between AI and its social-economic effects on labor. During her contribution to the panel on AI impact on labor markets, presided by HEC academic Frédéric Godart, Tubaro outlined the essential role played by “micro-workers” in AI production. “These are often highly-educated, underpaid and precarious workers who reflect the underbelly of this sector.” She elaborated: “We need to anticipate the disqualification and de-skilling of jobs as well as the human biases that these algorithms can reinforce. Instead of deploying AI as a purely technological tools, we must think of ways to use this technology to reduce and not reproduce these inequalities. So I’m calling for better regulation of AI, a technology which has not yet reached maturity.”

Speakers also brought up the cultural clashes over AI and robotics on both sides of the Atlantic. Paola Tubaro noted, for example, the heightened sensitivity over income inequality in France, leading to resistance to AI-driven campaigns on pay transparency. “And gender or racial inequalities are also more taboo in Europe than the US.” On the other hand, former YouTube engineer and Paris University researcher Guillaume Chaslot, chastised the tendency of US giants like Facebook and YouTube to “grow fast and break things which you try to fix afterwards.” He added: “If companies think about the impact of their algorithms at first, it will lead to much better long-term impacts with long-term benefits.”

And HEC in all this?

Chaslot should know: he helped build YouTube’s recommendation algorithm before leaving the company, partly to fight conspiracy theories propagated over YouTube using his very algorithms. In a tweet, he hailed YouTube’s recent decision to halt the recommendation of conspiracy theory videos as “the beginning of a more humane technology… that empowers all of us, instead of deceiving the most vulnerable.” His devotion to informing citizens on the mechanisms behind algorithms “that determine and shape our access to information” is coupled with a call for business to gear themselves towards AI. “French companies don’t understand this yet. Managers here will just put one to two data scientists on AI assistance. While the Chinese and Americans put AI at the center of companies and build the rest around them. HEC Paris has a major role to play on how this AI has to be implemented.”

This concern for HEC’s role was brought up by the audience at the plenary session which closed the conference. “What skills should business schools be teaching for managers to benefit from these technological tools?” asked a faculty member. “Be open to learning and have the ability to modify your practices over time, to integrate new information,” was the immediate answer from Meghan Alzec, Head of Data & Analytics at Spencer Stuart;  “Accept to fail,” added Renault Digital General Manager Serge Yoccoz. “Fear of failing is so ingrained that it becomes a challenge to test new technology.” Bertrand Thirion from DATAIA observed the importance of cultivating skepticism – he advises students to be more skeptical of the results from AI-based tools, rather than accepting these results blindly.

For Mitali Banerjee, the challenge is more global: “Educational institutions, in partnership with industry and governments can think of ways to revitalize vocational education models which are often seen as lower status. University and vocational educational models can be improved both to better serve students’ goals and their aspirations. A school like HEC has no trouble attracting marquee recruiters from top consultancy and finance firms but we should do the same to bring in the best non-profit organizations that are using AI and robotic technology to serve broader social goals". She further observed, “there is a lot of talk of AI and robotics freeing us to do higher value creative and complex work. This view seems to miss the mark. At this point, AI is able to do many creative tasks - write poetry, create paintings and music – increasingly as well as humans can.  Most creative work – a song, a novel- does not become a multi-million dollar block buster. However, producing creative work creates tremendous value personally and socially for the small community of people who produce and consume it."

“The problem is, our labor market is not designed well for rewarding the social and personal value created by such activities or work that involves empathy and compassion or more broadly work that people find meaningful”.   The HEC Professor then invited other fields to join in a multi-disciplinary approach to education: “AI used to be an interdisciplinary field with philosophers, cognitive and social scientists, all working with computer scientists and statisticians to develop these technologies. AI should return to its interdisciplinary roots.” Banerjee concluded by projecting two images that represent two visions of future societies with staggering technological tools: “The first is from Star Trek, where they use technology to explore, discover and learn without interfering with any other civilization or community. The second is from Star Wars, where technology is used to fight wars – a primitive pre-occupation. Each embody two distinct set of values. The choice is ours to make. We can decide which values we want to espouse. Instead of asking will AI and robots replace our jobs, we should be asking what values matter to us? And then use those values as our guide for shaping the social structure that will determine the impact of these technologies.”