Joseph Stiglitz, winner of the 2001 Economics Nobel Prize and Professor of Economics at Columbia University was the exceptional guest of HEC Paris for a conference held January 14th 2014, on the theme “Creating a Learning Society” based on his forthcoming book with Bruce Greenwald Creating a Learning Society:  A New Approach to Growth, Development, and Social Progress (Columbia University Press, 2014). 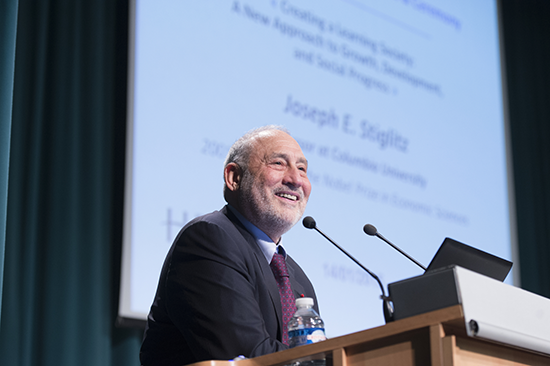 More than 700 students attended the conference which took place in a packed grand amphitheater. At the end of the lecture, Professor Stiglitz was awarded the HEC Paris Honoris Causa Professorship.

Recently, Professor Stiglitz focused his attention on the role of inequality in our societies and what are the implications of this for economics outcomes. This time, the main theme of the book is that sustained economic growth requires continuous learning and spread of knowledge in the population. However, he explained that as knowledge is a public good and there are important spillovers in the production and adoption of knowledge – the markets may fail to provide the adequate level of learning and innovation in modern economies. Then, state intervention may be necessary.

The traditional educational system may not be up to task however – as the complexity of the modern economy requires continuous learning for new tasks and jobs. In fact, what one learns in high school may become obsolete within 20 years after graduation.
Professor Stiglitz highlighted the fact that one of the most important knowledge accumulating processes is on-the-job learning. There are two major problems with that as well. Firstly, shorter job tenures at firms (high worker turnover) limits the investment that firms want to conduct in terms of training workers. Second, the below-the-trend performance of economies during recessions and the resulting unemployment causes that a lot of knowledge accumulation that would otherwise take place – for the current and the future generations – is lost. That is why it is important to fight unemployment or at least to provide continued training. Another long-term negative impact of recessions is the bankruptcy of firms that leads to losses of their specific knowledge – which can never be recuperated even when the economy improves.

The impact of austerity measures may have long-term consequences if the quality of education or health services (that impact the productivity of workers) is impaired. Altogether – with the losses in human capital stemming from unemployment – this means that the short-term focus on debt reduction may be misguided. The productive side of the economy – and also its capacity to repay debt – may be compromised by austerity policies.

Professor Stiglitz pointed out a different set of questions that appears in terms of appropriate policies for developing countries. The major gap between them and developed countries appears to be not in terms of resources (like capital) but rather knowledge. He advised that successful developing countries should invest not only in primary or secondary education, but also in university level education and R&D. “They should promote industries where there is a possibility of learning-by-doing with strong spillovers across different sectors. If they solely relied on static comparative advantage, advocated by traditional trade theory, they would specialize in low valued-added products and remain trapped in poverty.” said Prof. Stiglitz taking the case of South Korea. In 1960, the country was advised to specialize and produce rice by various international organizations such as the World Bank. They did not listen, invested in education and modern industries that spurred unprecedented growth. 50 years afterwards, Korea is a country that does extremely well in comparative education PISA studies and has one of the most advanced economies in the world. Such government-sponsored policies do not guarantee success – as there are many instances where state intervention was wasteful and ineffective. However, rare are the cases of countries that succeeded in catching up with the most developed economies without such policies.

At last, Professor Stiglitz ended up his speech by saying that the design of the education system—are also social decisions which have to be addressed collectively. He addressed the HEC students saying that the choices we make will inevitably shape the economy, politics and society, for better or for worse, for decades to come.