What is Corporate Social Responsability (CSR)?

Corporate Social Responsibility (CSR) is commonly defined as a business model in which companies integrate social and environmental concerns in their business operations and interactions with their stakeholders instead of only considering economic profits. CSR became mainstream in the 2000s. The UN Global Compact and the Global Reporting Initiative cover the main international standards of CSR.

In addition, many definitions of CSR distinguish it from philanthropy, emphasizing that CSR is generally related to the firm’s core business and contributing to its profitability. CSR, so understood, can be conceptualized as a set of practices integrating social, environmental and profit-related considerations.

The ISO 26000 norm, one of the most widely adopted CSR standards, explicitly links CSR with Sustainable Development, by defining it as “the responsibility of an organization for the impacts of its activities on society and environment, through transparent and ethical behavior that contributes to sustainable development […].”

When did CSR emerge?

The concept of CSR has a long history. Its intellectual roots can be traced back to at least the 1950s and 1960s, when economists like Howard R. Bowen* and William C. Frederick** undertook an in-depth reflection on the social responsibilities of business firms and their executives. This was in response to moral questions arising from the professionalization of management and the emergence of unprecedentedly large corporations.

CSR became mainstream through the 2000s. Evidence for this can be seen in the evolution of CSR reporting rates: While in the late 2000s, merely one of three of the world’s 250 largest companies by revenue published a CSR report, the CSR reporting rate is plateauing at levels consistently above 90% since the early 2010s. 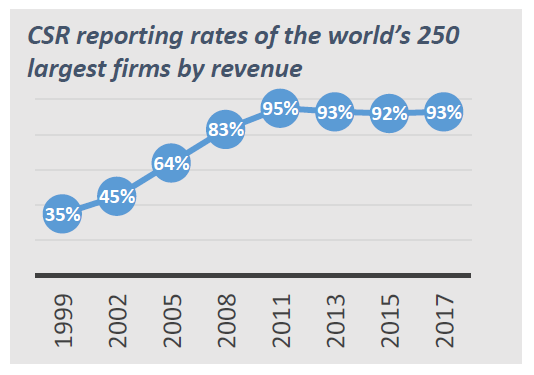 While CSR practices are voluntary, firms are not left without guidance when they engage in CSR: They can draw on a series of standards and guidelines, some of which have become a global benchmark over the years, such as:

Other prominent international standards providing guidance for effective CSR management are the Integrated Reporting Initiative and Framework that was launched in 2011, the AA1000 Series of Standards, the ISO 26000 norm, and the SA8000 certification standard for socially acceptable practices at the workplace.

CSR has been often criticized for being:

Accordingly, several scholars have suggested more ambitious approaches. M. Porter and M. Kramer, for instance, propose the Creating Shared Value (CSV) approach, that views social and environmental challenges as business opportunities and possible sources of innovation.(1) Other authors, like W. Visser, call for a CSR 2.0 approach that attempts to tackle the root causes of today’s problems through innovative business models and a deep transformation of firms’ practices.(2)

In view of multinational companies’ power and ability to influence public policy, several first-rank CSR scholars recently called for expanding our understanding of CSR to include what they call a “Corporate Political Responsibility” (CPR).(3) They argue that firms should communicate more transparently about how they advocate for socially and environmentally beneficial public policies, e.g., through donations, lobbying activities, and CEO activism. Corporations should be assessed on their political actions, and the coherence with their business and CSR activity.

Discover the Master on Sustainability and Social Innovation