What do companies gain when they make political contributions? HEC Paris professor of finance Alexei Ovtchinnikov and his co-authors sought to pinpoint one benefit for firms—increased innovation—and to understand the mechanisms behind it. 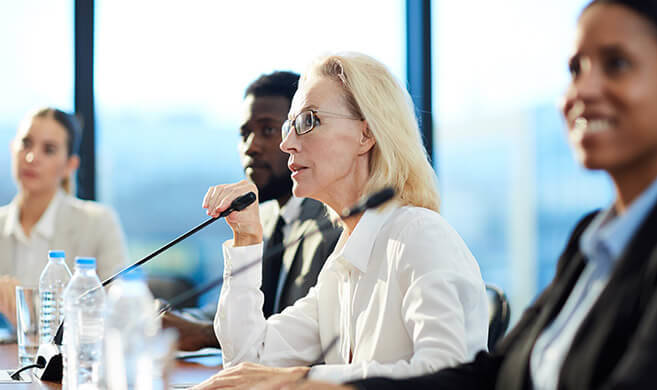 In 2008, Henry Paulson, who was secretary of the treasury under President George W. Bush, met privately with hedge-fund managers. He gave them advance warning that the government was going to put the mortgage finance giants Fannie Mae and Freddie Mac under conservatorship—and that the common and preferred stock would be wiped out. This was information of obvious value to hedge-fund managers.

Similarly, Koch Industries—which has its hand in diverse industries including petroleum, chemicals and energy—organized a private talk by Republican Senator Mitch McConnell in August 2014, during which he disclosed that if Republicans gained control of the Senate that fall, they would be “pushing back” against federal agencies, including the Environmental Protection Agency.

The idea that companies benefit from political activism—making political or charitable donations, lobbying, having past or present politician on a board of directors—is well established. However, our understanding of the exact mechanisms through which political activism creates value is far from complete. My co-authors and I sought to establish a link between political activism and a specific benefit: innovation, which is crucial for companies to gain or maintain a competitive edge.

In our analysis, we posited the hypothesis that one benefit of political activism for firms is access to superior information. Companies don’t like uncertainty, and one way of reducing uncertainty is to foster close relationships with politicians, who are sources of important information. With more information, companies can make better investment decisions, including internal investments in innovation.

As previous research has indicated, because innovation is costly and outcomes uncertain, firms with no access to political information innovate less. We hypothesized that firms that had connections with politicians were better informed about when innovation would be successful, and therefore would innovate more—and more successfully.

We decided to look at existing data on US federal campaign contributions and, as a gauge of innovation, patent filings to see if there was a connection between corporate contributions to election campaigns and investment in innovation.

Our analysis of the data did in fact support our hypothesis: political activism has a large economic and statistical impact on firm innovation. Predictably, the effect of political contributions on innovation is stronger for contributions to politicians who sit on Congressional committees with jurisdictional authority over a firm’s industry.

A further analysis showed a strong causal link when we performed a “natural experiment,” an extreme, unexpected event that would have a strong effect on outcomes during our sample period. Thus, the surprise Republican win in the 1994 midterm elections sparked new Speaker of the House Newt Gingrich’s also surprising decision to appoint junior Congressmen to committee chairman positions. Because the chairman appointments were unexpected, the firms that supported the four new chairmen prior to the 1994 election could not have adjusted their contribution strategies prior to the election.

Thus, if political contributions to committee chairmen are valuable, as has been shown by previous research, and affect firm innovation, firm patent activity would increase following the election. Indeed, the number of patent applications for the relevant firms we examined grew from an average of 4.8 applications in 1994 to 8.4 applications in 1999—a 75% increase—while the patent activity of the control group stayed essentially flat over the same period.

Taken together, our data suggests that politically active firms face lower political uncertainty and, therefore, make better informed innovation decisions. Our research contributes to the understanding of corporate political activism in several ways. First, the idea that value from firm political activism stems in part from its effect on real investment decisions, such as investment in innovation.

To measure the link between political activism and innovation, we looked at corporate contributions to US congressional elections and subsequent patent filings for the period 1979 to 2004. We also gauged the quality of the patents, as indicated by how often a patent was cited by other patents. We demonstrated positive evidence for a causal relationship between political activism and innovation. We also found that both the number of patents and their quality was higher for politically active firms compared to a control group.

Though only 10% of publicly traded companies in the US make political contributions, political activism is a viable business strategy for firms, and should be taken into account when companies develop their overall strategy. Our research shows that firms receive a specific benefit from political activism, namely, increased innovation. We also show that politically active firms are able to set their innovation strategies in expectation of future legislative changes. Firms will likely receive added benefit if an election is highly contested, and, naturally, if the politician is on a Congressional committee with jurisdiction over the firm’s business sector.
Based on an interview with Alexei V. Ovtchinnikov and his article “Political Activism and Firm Innovation” (Journal of Financial and Quantitative Analysis, May 2020), co-written with Syed Walid Reza (SUNY at Binghamton) and Yanhui Wu (Queensland University of Technology).
Related topics:
Finance
Governance
Strategy
Download & Print
Share
FACEBOOK
TWITTER
LINKEDIN
EMAIL

Alexei Ovtchinnikov has significant expertise in the field of corporate finance, including financial management, mergers and acquisitions and...