Professor of Finance and Executive Director of the Société Générale Energy & Finance Chair at HEC Paris, Jean-Michel Gauthier spoke to us on March 3, one week after Russia invaded Ukraine. Jean-Michel is a veteran of the energy business. After a start in the oil and gas industry, he moved to the energy consulting for 16 years as a partner at Deloitte. In parallel, he joined HEC Paris’ finance department in 2006. The school campus is where we discuss the dramatic events developing in Ukraine. Jean-Michel focuses on a key factor behind the conflict: the question of energy. Not just the pipelines that bring Europe 40% of its natural gas and much of its oil – but also the knock-on effects on all energy sources that prop up our global economy. He helps us understand what role energy is playing in this ongoing conflict and where these upheavals could lead the entire planet. 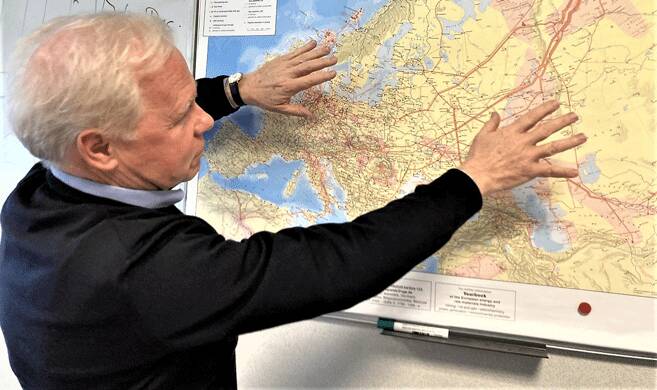 Professor Jean-Michel Gauthier shows the gas pipelines on a map, in his office at HEC Paris

The roots of this war go back far beyond February 24, when Russia invaded its neighbor. Some are saying that Russia has been using its natural gas and oil as a form of economic blackmail. What is your analysis?

The jury is still out. Indeed, the dispute on gas contracts and gas transit between Russia and Ukraine goes back to the Maïdan revolution and the annexation of Crimea in 2014. Did Russia use its gas as a weapon? Why, for example, did Russia reduce the gas flows via Ukraine and Poland at the end of last year? Russia says it was refilling its own stocks, its own storage facilities. And Moscow has a point because it did happen, independent reports corroborate this.

In addition to a loss of transit revenues for Eastern European Republics, the consequence has been that gas prices have been spiking up ever since. A direct knock-on effect has been that it pushed up electricity prices in Europe, as well as coal prices. When you see gas prices flare up, when you see oil prices shooting up, the only alternative is, of course, coal.

Why did Russia reduce the gas flows via Ukraine and Poland at the end of last year?

Politicians and economists are exploring other options to importing gas and oil supplies from Russia. Some are suggesting ramping up these supplies from other destinations like the United States, Algeria or Azerbaijan, for example. Your thoughts on this?

Gas production facilities, and gas pipelines, have been designed for a particular capacity, with limited flexibility. In the case of LNG (Liquefied Natural Gas), the problem will be at destination, when it comes down to re-gasifying the content of the vessels, of the methane tankers. The regasification capacity around the EU is currently operating almost at full capacity. Which means that there is no room to increase its output. So, there will be a bottleneck at the receiving end, the terminals will not be able to accommodate more vessels. Our economies have been designed for peace times, with smooth demand variations from one year to the next. Now we are talking about replenishing almost all our gas storage capacities in autumn. We are really heading into very difficult times later this year.

Gas production facilities and gas pipelines have been designed for a particular capacity, (…) for peace times.

Is there a long-term possibility of new alliances being created, strange bedfellows striking up new partnerships, perhaps? For example, the EU allying itself with Iran, Russia and China consolidating their relationship. Could there be a new world order peeking its head over the Ukraine-Russia war?

Absolutely! This is the new world order that we can see in a nascent form. If we want to make up for the shortfall of Russian gas, we need to have an agreement with new potential suppliers. Today, additional pipeline imports from Algeria, Azerbaijan or more US LNG imports are limited options. Iran only has the potential to replace Russia in the long run but the way to a viable agreement with Iran will be terribly bumpy.

At the same time, by excluding all Russian banks from the SWIFT mechanism and moving away from Russian supplies, we are pushing Russia into the arms of the Chinese. So yes, you're absolutely right, the new world order might be the EU trying to find a new relationship with the Middle East at large. And Russia being turned much more to the East.

The new world order might be the EU trying to find a new relationship with the Middle East at large, and Russia being turned much more to the East.

Another point I want to make concerns energy efficiency - making the most of the energy that we produce or generating more GDP (more value out of less energy) or refining demand-response mechanisms (in actual fact, cutting down on energy losses). Before the potential loss of gas supplies from Russia, we believed energy efficiency would be the best way forward for the energy transition. It still remains so, and we will have to maintain that priority. But as we stand today, energy efficiency is never going to be enough to make up for Russia's shortfall. Nor will renewable energy sources.

Yes, what consequences could this war have on Europe’s commitment to alternative energy?

For us, Europeans, the priority until now has been to get our energy transition on the way, and to develop clean electricity generation mechanisms in order to meet carbon neutrality by 2050. As a result of this conflict, all these things will be set back by decades. We find ourselves in a predicament, in a situation where there is no way the wind and solar capacities alone are going to make up for the shortfall in Russian gas or Russian oil. Which means that our energy transition policy may get derailed dramatically. The only way to make up for any curtailment in gas supply will be to go back to fossil fuels, so we are back again to the point where we wanted to phase out oil, gas, and coal - we are right back into oil and gas and coal.

As I keep saying to my students on the campus, we must never overlook the fact that a world that wants to go green and move into a carbon-sober economy may still be completely derailed by fossil fuels, which are set to come back with a vengeance.

Indeed, there is also a big alternative: it’s called nuclear, and that is probably the most sensible option.

See tweets on Jean-Michel Gauthier's analysis of the energy crisis at the press conference of September 22 (in Paris and in French): https://twitter.com/HECKnowledge/status/1576211214979387394

Jean-Michel Gauthier is Professor at HEC Paris and Executive Director of the Energy & Finance Chair sponsored by Société Générale.