Tributes for HEC Professor Denis Gromb have flooded in from colleagues, academics and former students worldwide, following the news that the Antin I.P. Chair Professor of Finance passed away on October 30. He was one of the most impactful and respected scholars in his field of corporate finance. On his request, those who wish to honor his memory are invited to make a donation to the following associations: Beaujon Hospital, Institute of Research in Pancreatology and Digestive Oncology; Diaconesses Hospital; for the children and families of the 12th arrondissement of Paris. 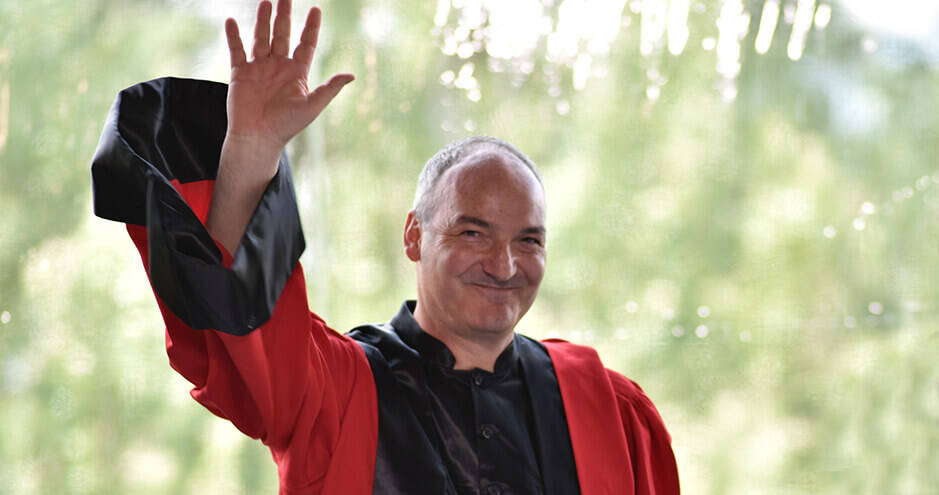 “The world is a lot worse today with Denis Gromb’s departure,” wrote Pedro Saffi, Professor of Financial Economics at Cambridge University. “A role model to every student that had the luck to work with him and an inspiration on how to be an academic in all forms of the word.” The University of Luxembourg wrote this on hearing the news: “In addition to being a brilliant economist, educator and a devoted member of the academic community, Professor Gromb was a friend of our Faculty. His expertise, knowledge and insight has contributed to shaping the recent growth of our Department of Finance. A great mind and a great man, gone much too soon.” Fabrizio Core also shared his emotion on social media. The Assistant Professor of Finance at ESE Rotterdam wrote: “It’s hard to convey how saddened I am by the passing of Denis Gromb. Denis has been more than a mentor to me and I consider myself lucky to have had many opportunities to interact with him. He was one of the kindest souls I have ever met in my life.”

Such messages reflected the imprint Gromb left behind him in terms of research, teaching and humanity. In 2016, the finance specialist joined HEC Paris after being a faculty member at MIT Sloan School of Management (1995-2001), London Business School (2001-2008), INSEAD (2008-2015) and a visiting professor at the London School of Economics (2015-2016). “He was an amazing teacher with outstanding pedagogical skills who received the Vernimmen Best Professor award at HEC Paris and was a recipient of numerous best-case awards,” stated HEC Dean Eloïc Peyrache.

Two of these were awarded by the London-based Case Centre for bestselling case studies. “These cases are like a light on the road to Damascus,” noted the Centre’s Director Richard McCracken when presenting the first of a brace of weighty trophies to Gromb in 2018. It was for his study on Prada’s Hong Kong IPO. “Yours is a stand-out case,” pursued McCracken, who had jetted into the HEC campus from the British capital. “That’s for several reasons: it was written for and with your students; the choice of a global brand like Prada gives it universal appeal; and the teaching notes you wrote to accompany it are so strong that institutions on the other side of the world can adapt it to their own context.”

In his 27-year teaching career, Denis Gromb always relied on student feedback to enrich his research. In 2021, he won the prestigious AFFi-CCMP Prize which rewards original, innovative analysis. It was for his case study on the 2012 purchase of Bouygues Telecom’s cell towers by a fund managed by Antin Infrastructure Partners. The case study was part of a broader educational agenda of the Antin IP Chair that Gromb coordinated: “It’s important the students be more aware of this industry and infrastructure investments in general,” he said at the time. “Our Master in Finance program has an entire course devoted to private equity and infrastructure. There are so many doors to open around human resources, macro-economy, political science, privatization.” The case study also bagged a second award from the Case Centre that year. The Centre, widely regarded as giving annual “case study Oscars,” applauded Gromb for bringing together all these disciplines. Not surprisingly, his work has been used across a range of programs dovetailed to the needs of MBA, executive and undergraduate students.

As a result of his impact in the field, Denis Gromb was appointed Associate Editor of the Rand Journal of Economics in 2016. He oversaw the publication’s support and encouragement of research in the behavior of regulated industries, the economic analysis of organizations, and more generally, applied microeconomics.

On top of all these professional successes, Denis Gromb stood out for his extraordinary contributions to the HEC Paris community. He was a role model, an empathetic ear for both his students and colleagues and a catalyst for countless initiatives. “Denis was an extraordinary professor, a mentor who changed so many destinies,” said Dean Eloïc Peyrache. “On a daily basis, he was a person who paid such particular attention to each and everyone around him. He leaves a huge void.” Indeed, Denis will be sorely missed.