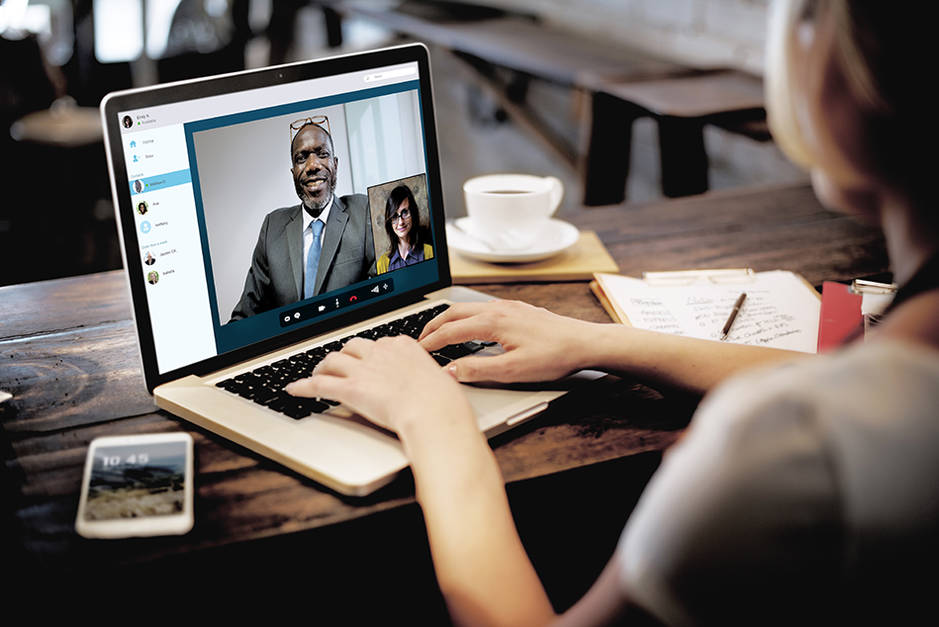 The MSIE degree breaks down into 20 courses offered through the Coursera platform. In its inaugural year, it was shared simultaneously online by 46 participants in 22 countries. The second wave of 71 students, this time from 37 countries, are now halfway through a Master which has seen its impact reverberate far beyond its initial goals. How has this new online program impacted its students, the school’s professors, and HEC’s online ambitions in general?

“In the 2030s and beyond, it is likely that major new technology breakthroughs such as artificial intelligence, massive cloud computing, and brain machine interfaces will emerge that will change many aspects of human endeavor including education.” The premonitory words of executive education specialist Anthony Picciano in his 2016 book “Online Education Policy and Practice” appear less far-fetched with the strides made by HEC’s experimental MSIE program.

Some may argue that the degree finds its roots in over 20 years of a reflection first initiated by Pascal Quiry. The 100% online Master has seen its first 45 participants triumph in a score of courses ranging from teamworking to social entrepreneurship and organizing for innovation. “We’ve swatted away many preconceptions, such as believing there is somehow a loss of quality education because it’s online,” said a satisfied MSIE Academic Director Thomas Åstebro. “Or that teams cannot overcome time zone differences for their capstone (ed., practical) projects which bring the degree to a climax.”

Quite the opposite, it seems. A third of the capstone projects the students chose to create during the closing six months are already morphing into startups which the participants hope to see lift off. And some do not hide their global ambitions. “I joined this program with my project in mind,” admitted Efthymia Lioliou. With a doctorate in Biochemistry this student hailing from Thessaloniki, Greece, reflects the diversity of professional and academic backgrounds of the MSIE students. “I decided to apply for the MSIE (because) I always wanted to have an impact on the world and play an active role in solving pressing societal, environmental and health-related issues. My project aimed at producing protein biotechnologically in order to feed the Earth’s growing population in a sustainable way.”

Partly thanks to winning the MSIE Impact Fellowship scholarship, Lioliou was able to acquire what she calls “the essential knowledge to be able to assess what it takes to create and sustain” her dream of creating a socially focused startup. The collaborative work between the Paris-based academics, an industry mentor, and three other MSIE participants was not without its demands, however. “Working with my team from a distance was at times challenging. I feel that some situations would have been resolved in an easier way if the four of us were working from the same office. This challenge, however, proved to be motivating and constructive towards the common team goal.” As a result, Lioliou feels she achieved all she had set out to do in the MSIE: “I would recommend it without hesitating – producing a team-project while working from distance was one of the most innovative and interesting, thought-provoking aspects of the degree.”

Thomas Åstebro recruited a dozen coaches precisely to answer challenges such as hierarchy and geography. “We carefully selected them, they all come from the business world and were a tremendous help to the teams,” he explained. “They used their years of experience to paper over any friction that might arise. Crucially, they guided them in an efficient and rapid way as the students worked together to commercialize business ideas which they had pitched to each other.”

One such coach was Monica Messio, who is both an entrepreneur and a medical doctor. Messio has also launched a manufacturing company for bakery equipment and completed a TRIUM Global Executive MBA, providing her with an ideal profile for the demands of the MSIE coaching post. “It was a wonderful experience,” she said from her Brussels base. “We met on line once a week and I felt blessed to work with such a motivated and talented team.” Messio’s group, based in Dubai, the United States and Paris, came together over a remote consultation platform called Consulib. “This platform offers simple and practical solutions for patients who do not have access to, or time for, healthcare,” she pursued. “The students were so complementary and motivated that they have since become business partners in a venture which is taking off now.” Messio dug deep in her own past experiences in entrepreneurship and the TRIUM she earned in 2016 to keep the project on track despite the different time zones, business cultures and experiences. “Flexibility is the name of the game here. You really have to tap into the respective strengths of each student and not overstep the boundaries. From the outset, there was a strong team spirit and I felt like an older sister to the team by the end!” The specialist in internal medicine and nephrology was so taken by the exercise, she immediately agreed to coach another team in the second cohort, whose capstone project began in January and is set to end just before the June graduation ceremony.

Yet, even before they wrap up their MSIE with the capstone projects, some students from the second cohort are applying lessons gleaned from their classes to telling effect. “Elements of all the courses came up in conversations and gave me a distinct competitive advantage,” said Dennis Zaidi, in reference to the Elite French Graduate School Entrepreneur Challenge he won in November. Zaidi triumphed thanks to his pitch promoting his Clean Lakes startup, a social entrepreneurship company aimed at removing pollution in Canada’s Great Lakes. “The MSIE courses gave me the specific bodies of knowledge and vocabulary to communicate my idea from the perspective of C-Level decision makers,” he continued before enumerating the qualities extricated from MSIE courses such as Management of a Growing Enterprise (Sebastian Becker), Social Enterprise (Florian Hoos) and customer-centric marketing (Marc Vanhuele, Frederic Dalsace and Corinne Dauger). “To be honest, there are aspects of every single course that played a role… These techniques are actually rarely properly implemented or utilized in the startup world." 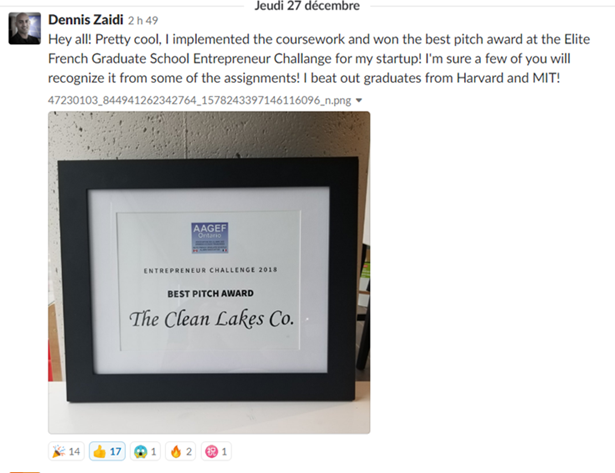 This second MSIE class climaxes in June 2019 and involves at least 75 students, a 50% increase from the first batch. They hail from 37 countries over three continents and, according to Thomas Åstebro, already possess strong management skills. “But many seek to acquire a more coherent view on the process and framework: starting up a business, competition and industry are just some of the fields of interest they want to grow.” General Electric Project Manager Rahima Khatir lauded the Master’s flexibility and international notoriety: “This is the most complete degree I’ve found on the market,” she insisted. Fellow student François Lignon concurred: “The MSIE provides me a global vision on innovation and it is compatible with my personal timetable,” said the Vice-President of the audiovisual company Arkena. “Thanks to the former, I’m working with fellow team members based in Kentucky, France and the Middle East!”

This trans-continental cooperation has also impressed the professors. “Before seeing it flourish, I was unsure about our ability to coordinate effective remote teams for the capstone project. But all the final pitches were highly professional and convincing,” admitted Marc Beretta. He is an Academic Director at HEC Paris, and, in terms of the MSIE, he is both Mentor and Team Project Coaches’ Supervisor and in charge of the Team Working course. “As far as teaching goes, I’ve run several webinars and found the challenge of this new way of communicating knowledge fascinating. Exchanging with students remotely turns out to be much more inter-active than I expected. We’ve established a strong proximity because the students took to the floor easily and don’t hesitate to ask probing questions. For me, this is a true leap in the teaching process.” The specialist in leadership and personal development likened the MSIE to a puzzle. “The degree brings together videos, webinars, courses and projects, the latter connecting all the lessons in applications and concrete projects that have a life of their own after the program is over.”

“We’ve assembled a dedicated team of professors,” added Thomas Åstebro. “They were handpicked with a commitment to a different mode of interaction. It took a while for all of us to assimilate the physical distance between all the participants and the recording of the webinars.” For the latter, the academics worked assiduously with HEC’s Digital Learning Team, led by Vanessa Klein and including Anne-Marie Evrard, Francis Taptue and Senior Digital Learning Manager, Ashraf Akbar. ”They’ve played a pivotal role in this difficult exercise. The overall outcome has been far better than we expected, the students giving the courses high marks throughout.”

This novel approach to teaching is already spreading beyond HEC’s boundaries. Thomas Åstebro has recently been working with the government in Ecuador on an ambitious program of online courses for high school students. 30,000 pupils will be involved in a randomized controlled trial investigating the potential that 100% online training courses could give them to advance to university STEM (science, technology, engineering and math) education. “I’m convinced this approach could represent a leap in the quality of teaching in a number of developing and middle-income nations,” Åstebro continued with emphasis. “This trial aims at showing youth alternative career options, in this case skills relevant to entrepreneurship and science. We are also exploring collaborations with Moldova and Egypt. But it can also work locally: we will try to replicate the model with job-seekers at France’s ‘Pole Emploi’ unemployment offices.” The Ecuador trial is set to begin in September 2019, as outlined in a paper co-authored by Thomas Åstebro, ENSAE academic Bruno Crepon, Professor Guido Beunstorf at University Kassel, and Lead Economist David McKenzie at the World Bank in Washington D.C.

By then, the first two cohorts, 117 students in all, will have graduated from HEC’s first-ever online Master degree, enjoying the plaudits from fellow-Alumni at the June 2019 Commencement ceremony. “We are extremely proud of this first graduating MSIE class and all the professors involved in its success,” declared Dean Peter Todd shortly after the first program ended. “The MSIE proves that we can provide an accessible, very high quality, high-engagement degree program online. This has been a transformative experience for all of HEC Paris.”

The graduates will be setting off on new paths as dozens of participants in the fourth cohort kick off their MSIE on June 24.

Following the experiences of the first two cohorts, HEC Paris is pleased to announce a revised, completely stackable offer. This will allow participants to start with open courses, a specialization and/or a certificate that offers credits toward a complete master’s degree. For more information, visit the websites of the MSc in Innovation & Entrepreneurship, the new open Specialization in Managing Innovation and Design Thinking or the Certificate in Innovation Management and Entrepreneurship


Return to the news list
Find all news HEC online