On September 18, 2017, Nobel laureate Eric Maskin became the latest recipient of the HEC Paris Honoris Causa Professor Award, a title which recognizes the works of exceptional heads of states, professors and business leaders. Accepting the award as a “wonderful honor”, the pioneer in mechanism design and implementation theory proceeded to describe his application of mechanism design on current electoral systems to a packed audience at the HEC campus. 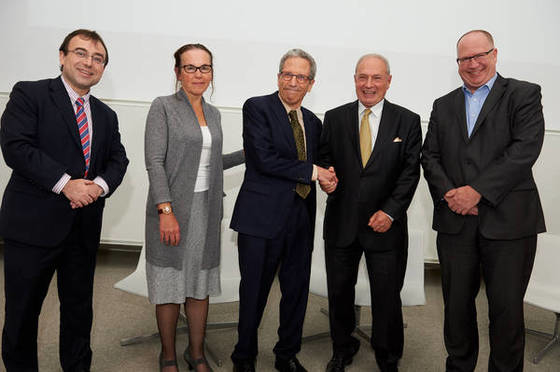 Economics has often been described as the “dismal science” because it fails to grapple with real-life challenges or anticipate crises like the 2008-9 financial crash. Neither of these accusations can be levelled at the 2007 Nobel laureate in economics Eric Maskin. His work on mechanism design theory anticipated the latter and his work on global warming and the West’s electoral system, underlines his commitment to the former.

“The application of the mechanism design theory to timely concerns has been at the heart of my work since it was attributed the Nobel prize in 2007,”  he explains in an exclusive exchange with HEC Communications. “I have studied the deeply flawed electoral systems that most countries use to elect presidents, as well as the need to create a mechanism limiting gas emissions to address global warming.” The Harvard academic elaborates on his environmental concerns: “Countries must come together to create a mechanism that takes into account not just the goals of groups but also the incentives of individual participants and nations.”

Eric Maskin believes the work that brought him to global attention a decade ago is as relevant as ever. The author of Maskin monotonicity remains a committed advocate of government regulation to balance pure market forces: “These forces don’t deliver the sort of outcome we want to have. Something has to be brought in to augment the market and that’s where mechanism design becomes relevant. If markets work fine on their own, there is no mechanism design issue, you just allow them to work in their invisible-hand fashion. But markets are not successful in all settings, as we saw in the 2008-9 financial crisis when financial markets blew up. It is a great example of how the instability factor must be solved through a regulatory process. And building these processes is where you need mechanism design. It’s even more relevant than people thought in 2007.”

In the past, the 67-year-old described the mechanism design theory he forged with Leonid Hurwicz and Roger Myerson as a mix of “the precision, rigor and sometimes beauty of pure math,” allied to its ability “to address the problems of real social importance.” This, Maskin wrote, “is an irresistible combination” which continues to be as potent as ever. Some of his recent research applies this theory to income inequality in the developing world. “Sure, growing inequality in the US, France and Great Britain is cause for concern. But I find it goes even deeper in developing nations like China and India.” The Adams University Professor at Harvard focuses on the economic theory which says developing countries and the world’s richest nations should move in opposite directions when exposed to global markets. “Globalization should give unskilled workers more benefits from the opening up of the system to global markets, especially in terms of wages. But this is not happening in practice.” Maskin’s work with Michael Creamer revealed the growing gap in wages in much of the developing world. “Part of the answer to these inequalities has to be government programs. Authorities must create subsidy programs in which private companies obtain tax benefits, at the same time as giving poor families cash transfers for sending their children to school. This will start narrowing the skill gap. In turn, it narrows the income gap.”

Eric Maskin has been sharing his ground-breaking work for decades. In 1980, he initiated MIT PhD students, including French Nobel laureate Jean Tirole, to information and game theories. This is one of several strong ties with France: “I do have a strong attachment to France and its economists, Jean in particular. Other French PhD students I guided include Philippe Aghion  and some of my early work was done with Jean-Jacques Laffont  (Ed: economist, specialist in public economy and information theory).

Looking ahead, Eric Maskin’s advice to students and researchers in economy is to build perspective by scrutinizing economic history. “As economists we tend to focus on current problems. But we don’t always recognize that the problems we face today are not unique in history.” And the native New Yorker leaps back 250 years to the Great Industrial Revolution: “In the 18th and 19th centuries, concern over jobs disappearing, taken over by machines, were exactly the same as worries we have today. But that particular revolution turned out to be good for labor. It took about 30 years for new jobs to come along but workers as a group ended up being much better off. In the 19th century we saw the biggest increase in workers’ wages in history!”

“I don’t know what’s to happen this time round,” Maskin continues, “each time is different. But what occurred at the time of the Industrial Revolution is valuable and relevant to a complete understanding of current trends. So studying economic history is valuable.”