HEC Paris’ first-ever European CDL Space Stream – co-organized by the HEC Innovation & Entrepreneurship Center and the Creative Destruction Lab, CDL - is set to start on October 20. A taste of the potential and the challenges that space offers students was glimpsed at the 73rd International Astronautical Congress, IAC. HEC and CDL teamed up with Voyager Space for an hourlong debate on working and living in space. We look back at the September debate for a peek at what space has in store for the 39 startups involved in the HEC-CDL space program. 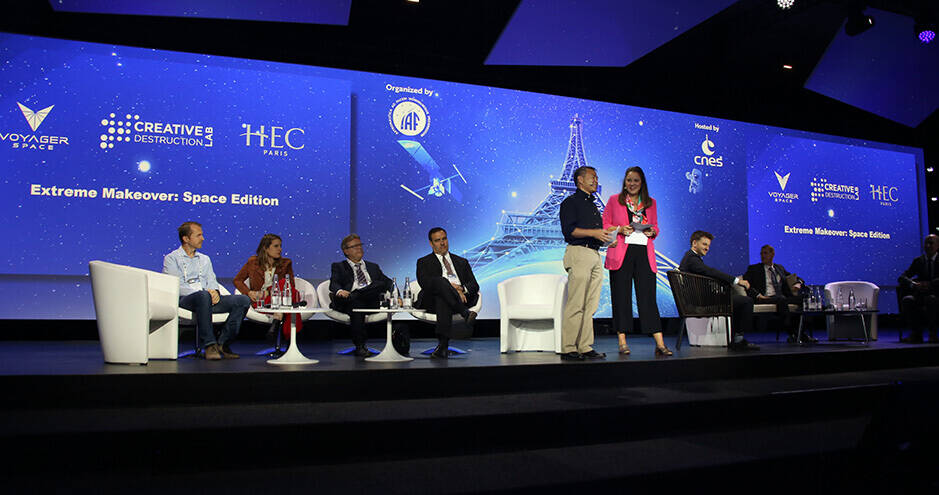 “Extreme Makeover: Space Edition” brought together space experts, astronauts and innovators in two roundtables casting a light on how space explorers can and will eat, exercise and experiment in their journeys into the stratosphere. It was a major initiative for HEC’s Innovation & Entrepreneurship Center (IEC) and the CDL Space program the school is launching on October 20. One of 19 Special Sessions organized at the IAC, the event reflects the expanding interest among the HEC community in the huge potential space holds - as well as the growing recognition of its fragility. “We have been aware of the fabulous potential that space holds for years, as our joint initiative with the European Space Agency in 2017 testifies,” says Inge Kerkloh-Devif, IEC Senior Executive Director. “We see a wonderful mix of generations attending this session and the convention, in general. It’s testimony to the opportunity to develop entrepreneurship in space for the general good."

This enthusiasm was indeed reflected throughout the four days of the world’s largest space congress, as over 9,300 delegates from 110 countries flocked to the Porte de Versailles for the 73rd IAC edition. Compare that to the maiden IAC in Paris in 1950 when a meager 10 delegates attended. 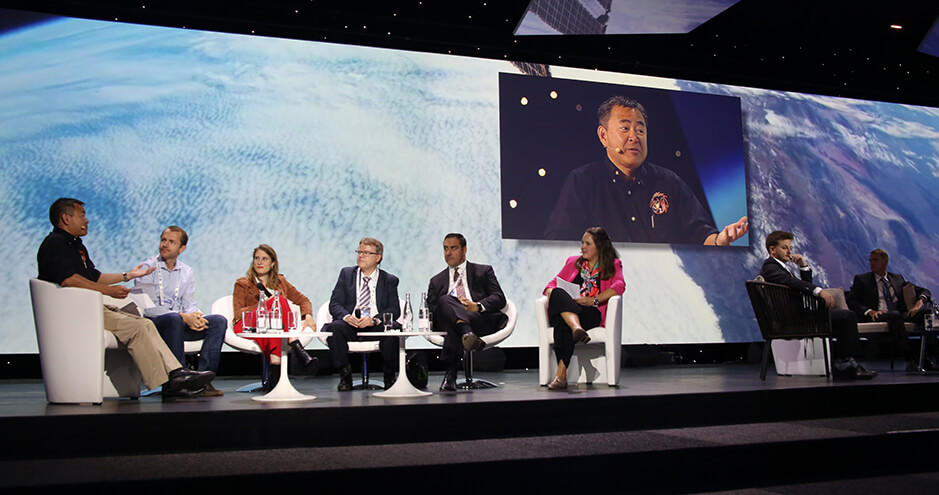 Moving into Space: the Basics

At least ten times more people were present for “Extreme Makeover”, the morning session held on Level 3 of the Paris Convention Center. It featured seven panelists and two cohosts all sharing their vision of how humans will take care of themselves in the next era of space exploration. The panelists were answering to the luminous Clémentine Decoopman, Associate Director of the CDL’s Space Stream who cohosted the session with brio. “So, I’m moving into space in a week,” she started. “You have to help me get used to the food, find a gym, build a social circle and transform my habitat into my new home. How do I go about it?” At Decoopman’s side was cohost Akihiko Hoshide who added the full weight of his experience: 21 years of space experience, 30 years with NASDA and 200 days in as a commander of the International Space Station last year. He quizzed each panelist to draw pragmatic answers to practical questions.

And the answers from the two roundtables came thick and fast. These included ZIN Technology’s John Zoldak advising Hoshide (who is a former rugbyman) on how to stay physically in tiptop shape in space; Leap Biosystems founder Adam Sirek mapping out the revolutionary usage of holographic communication to bring space and Earth closer; Cosmic Shielding CTO Lembit Sihver making spacecrafts resilient to the harsh radiation environment in space through his firm’s 3D printing technology; Nanoracks Senior VP Marshall Smith inviting Decoopman to enjoy the private space stations and platforms his company is building;  StarLab Oasis engineer Ben Greaves describing his company’s agricultural technology for nutritious space food in zero gravity; Ÿnsect co-founder Hubert Antoine sharing his dream of a vertical farm paradigm to expand his insect protein and fertilizer production into space; and Zephalto’s Amicie Montclar making the sizable audience dream of the overview effect her company procures with trips to contemplate the curvature of the Earth and its otherworldly beauty. “Listening to you all, I sometimes feel technology is creating something straight out a 22nd century science fiction movie,” exclaimed Hoshide, scratching his head in glee and slight bewilderment. The veteran astronaut admitted that some of the technology proposed will revolutionize travel towards the moon and beyond. On top of generalizing this travel, he said, it will make space exploration more comfortable, environmentally friendly and democratic. 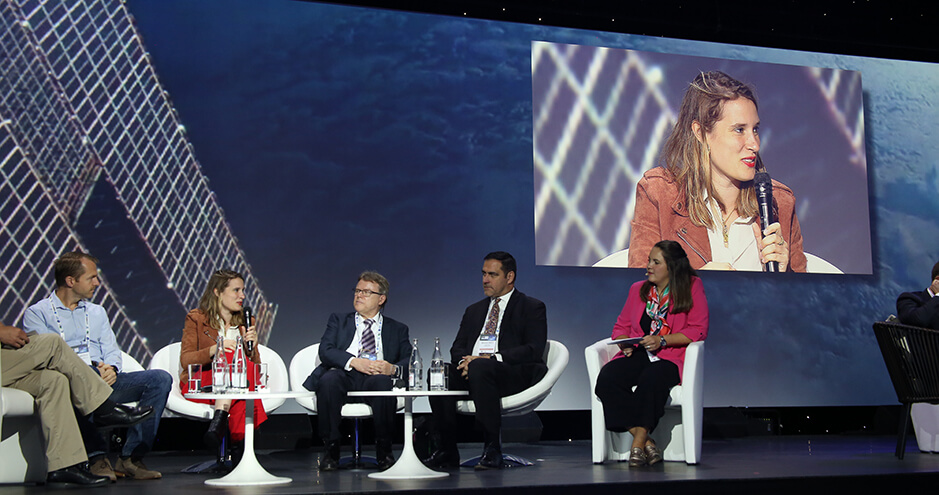 A first step in these voyages could well be to embark with Amicie Montclar. The 2016 HEC Paris graduate has been putting her years at the business school to good use. Indeed, she continues to grow her Zephalto startup in HEC’s incubator at Station F by offering low-carbon balloon voyages to the middle of the stratosphere. In the past five years, Montclar has traveled beyond the HEC Master in Management and International Law programs to integrate her passion for philosophy and art into Zephalto’s approach: “We take our clients 25 kilometers up to contemplate the curvature of the Earth, to experience the beauty of the space,” she explained. “There’s a specific emotion that wells up that’s called the overview effect. You’re suddenly absolutely overwhelmed with an emotion that brings you back to your childhood. Providing this sensation to clients is in harmony with who I am. I studied history of art in parallel to my six years at HEC and I’ve carried that duality into my professional career. You know, beauty transforms you. You’re not the same after those six hours in the stratosphere. It takes you away from this world of laptops and smartphones and current business practices. And that’s my goal at Zephalto.”

During the roundtable, Montclar warned about the fragility of this other-worldly experience, however. “The Earth is burning, and space tourism has to be handled with caution,” she warned the fellow panelists. “Carbon emissions must be reduced.” Later, she elaborated: “Sustainable space tourism is do-able and there’s the high tech technology to innovate in an exciting and positive way. It has to be taken on board but sustainability doesn’t mean a lower quality of life, it’s actually much more exciting.” 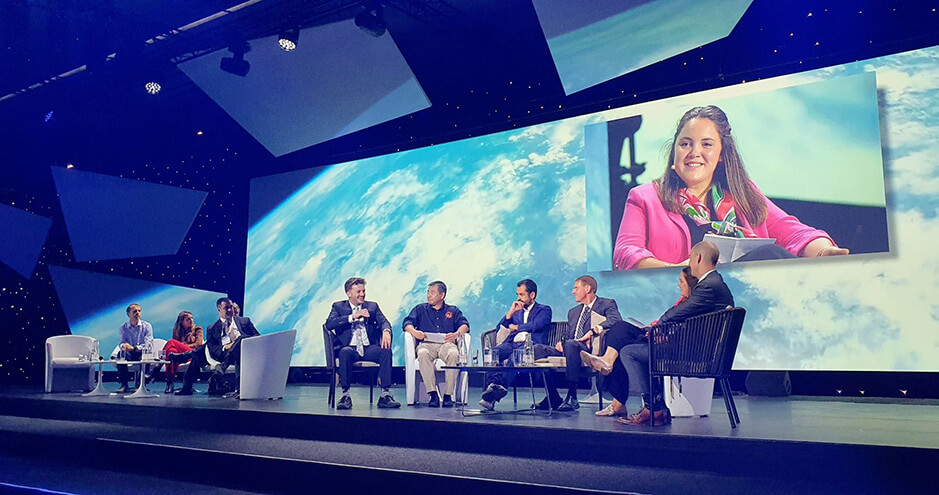 Harnessing the latest technology with space exploration is at the heart of the newly created HEC CDL Space program which is about to take off on October 20, (the same month the second-ever HEC CDL Climate program starts). 39 companies from 15 countries have been handpicked for this intense seed-stage program co-organized by HEC, Rotman School of Management and Georgia Tech. Newly-appointed Associate Director, Clémentine Decoopman, agreed with the panelists that space needs to become more accessible to non-astronauts: “Today’s exchange shows how companies which normally operate outside this sector, like Ÿnsect and Zephalto, are becoming involved. There’s no longer the need for big launchers to reach the stratosphere and this is democratizing space. Small startups can also be part of this big adventure.”

The former Associate Director at CDL in HEC’s Innovation & Entrepreneurship Center underlined the link between the companies represented onstage and the Creative Destruction Lab she co-runs. “Professor Lembit Sihver was involved in the CDL two years ago. And Adam Sirek, who cofounded the Leap Biosystems, was a young startupper in 2019. You just need a brilliant idea, strong commitment and a niche to break into this sector.” 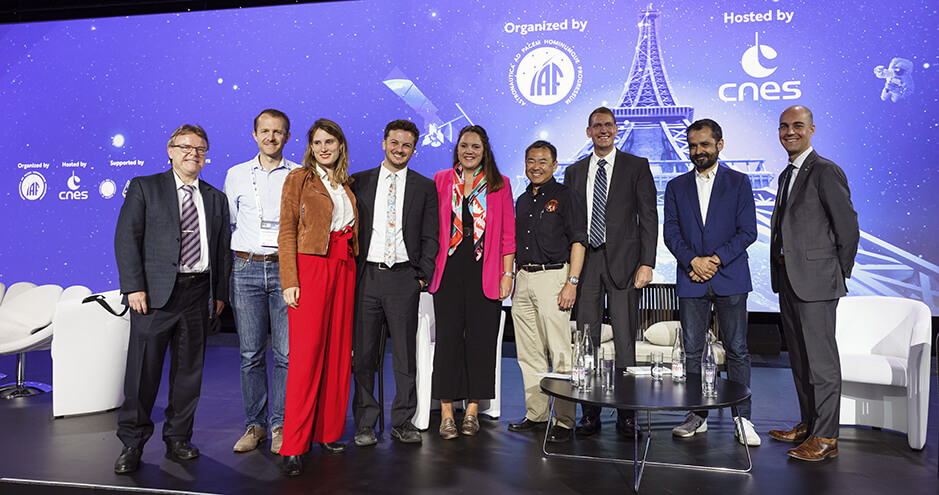 Taking Ynsects into a New Dimension

The presence at the roundtable of Ÿnsect CEO Antoine Hubert is a case in point. He cofounded this world leader in protein production and natural insect fertilizers in 2011 - alongside HEC alumnus Jean-Gabriel Levon (H09), the firm’s current Chief Impact and HSEQ Officer – and likened his firm’s relationship with space to a multi-stage space rocket: “Our first stage was a small unit providing insect protein production for animal feed in Europe. Then, we added new markets linked to high-end, high-value ingredients for human nutrition. After that, we added new geography stages: we expanded to the USA, Asia, to the rest of Europe and multiplied the exploitation of new insects, reaching the last stage of the rocket. Space nutrition makes sense for us since we’re totally automated and able to operate at huge distances, such as those between the Earth to the moon. We produce proteins and oils which are essential for human metabolism and cannot be found in the plants that NASA and ESA grow in their ISS space station.”

Hubert pointed to flies and crickets as species that are well adapted to the rigors of space. “We also are exploring ways other insects can help us deal with human and vegetal waste in space. There is still much research to be done but the technology we’ve developed already has proven insects can provide proteins in a record time, need the least amount of space and can be controlled automatically at a distance.”

For Aymeric Penven, the IAC roundtable reflected this democratization of space technologies. He’s the Associate Director at the HEC CDL-Paris program and believes the Extreme Makeover event is a major step-up for the school: “We see how the narrative around space exploration and exploitation is changing and allowing smaller companies and the greater public to become involved. So... see you soon on the other side of the gravity well!” In his summary of the morning, Penven paraphrased French author Antoine de Saint-Exupéry, applying this 1959 extract of The Citadelle to the challenges posed both by climate change and space exploration:

“Building a boat isn’t about weaving canvas, forging nails, or reading the sky. It’s about giving a shared taste for the sea, by the light of which you will see nothing contradictory but rather a community of love.”