The central hall at Station F was packed with over 500 participants at HEC’s Demo Day which celebrates the school’s entrepreneurship drive through some of the most innovative solutions for tomorrow. None more so than the official announcement of a space stream that invites 40 top startups from round the world to invest in the yearlong CDL program destined to ally scientific space research with entrepreneurship. The launch was followed by a debate featuring two new space-oriented companies, Zephalto and Gama, and Luca del Monte, Head of the Commercialization Department at ESA. The three had a frank discussion on the promise and challenges that space frontiers offer. “The debate illustrated the high potential for business which is just opening up,” said Inge Kerkloh-Devif, Senior Executive Director of the HEC Paris Innovation & Entrepreneurship Center. “The speakers underlined this new-found accessibility as private-public partnerships grow. I was also struck at how some of the problems on Earth, such as sustainability and climate change, can be addressed by space companies exploring ways to limit debris, for example.”

Panelist Andrew Nutter is co-founder of a deep space exploratory company, Gama, as well as being a mentor in the CDL-Paris Climate stream. His young business is preparing to launch its first version of solar sails for deep space exploration in October 2022. “The CDL Space stream is an exciting initiative for everyone involved. There’s a large community of skilled space engineers out there who need the guidance and entrepreneurial initiatives that HEC can offer, both through its academics and students. I’m really looking forward to mentoring some of the 40 startup companies being selected for this first-ever global space stream.”

The HEC CDL Space stream has been created in partnership with Toronto’s Rotman School and Georgia Tech’s Scheller College of Business. All three aim to foster a global network of mentors comprising of space investors, successful entrepreneurs, astronauts, scientists and innovators. Ajay Agrawal has been investing in a Rotman space program for four years and believes it is time to expand. “The global Space stream will create a bridge between two continents — North America and Europe — that have different landscapes in space exploration and commercialization,” Rotman School said in a press release. “This means twice the potential, and twice the possibilities for participating ventures.”

Christine Tovee is a CDL-Paris mentor who’s had a long and rich career in space. Her aeronautical projects on both sides of the Atlantic have included a stint as CTO of Airbus Group North America. Since 2020, Tovee has also been mentoring the space and blockchain streams for the CDL Toronto program. “We’re talking about a global marketplace and a global set of players,” she declared.  “Space is a relatively small sector, with some really particular skills that are needed. If you don’t have a global perspective from the start in the space sector, you’re limiting your horizons.” 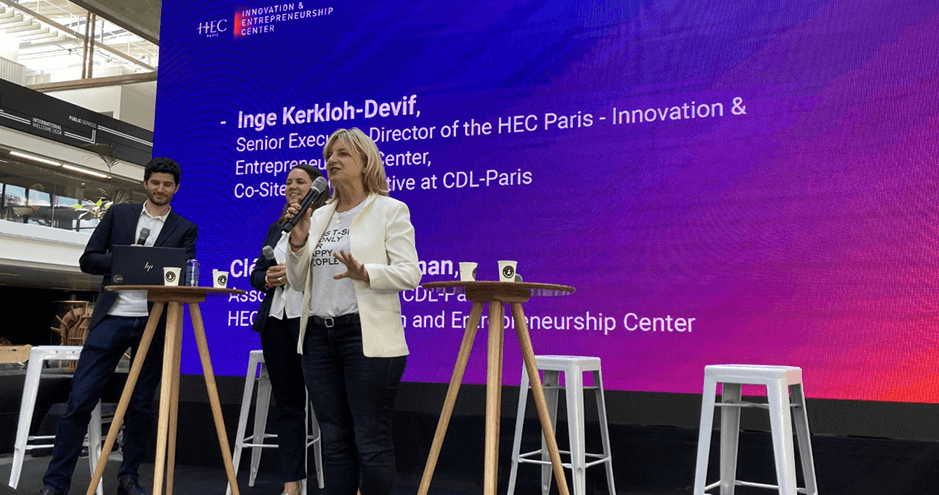 The Economy of Space

At the helm of the Paris Space CDL stream is HEC scholar Nathalie Riond, who was previously involved in the school’s ESA Lab Chair program, sponsored by ArianeGroup and ESA. “This is a wonderful opportunity in a field that is just opening up,” she explains, four months before the Space program’s launch in October. “There are long-term stakes here, not only for space exploration but fields as diverse as telecommunications, disaster management and climate. We are also studying global geopolitical factors, the questions of regulation and values, how to build value in space and managing the scarce resources that remain. I’m delighted to expand the opportunities that the economy of space provides, guiding HEC students in the face of uncertainty. That is a field I have been specializing in for years.”

The nine-month seed-stage mentorship and investment readiness program assists 40 startups who were chosen after rigorous selection process. The objective-based course will guide young, massively scalable, science- and technology-based companies. They will be working with world leading mentors and MBA students from HEC who follow and collaborate with the nascent companies. The Rotman School hub is particularly excited at the prospect of adding seasoned players from the space industry to a roster that currently boasts the like of astronaut Chris Hadfield (who has orbited Earth over 2,500 times). “Georgia Tech has one of the country’s top-ranked aerospace programs and attracts some of the most talented minds working in space technology,” Rotman declared early this year. “Paris offers its status as an international hub with one of the best business schools in the world. Like the US, the European Union is making exciting investments in the region’s space industry. The EU announced a €1 billion space investment fund earlier this year.” With Toronto’s existing community of CDL mentors and investors, HEC is hoping to capitalize on a program Dean Eloïc Peyrache characterizes as reflecting the school’s entrepreneurial dynamism, one which has seen the birth of over 20 entrepreneurship programs in the past two decades.

The HEC CDL Space stream launch coincides with the signature of a new partnership between the business school and Serco Europe, a leader in the space industry. This collaboration aims at facilitating access to vital space data for the 400 professors, researchers and experts at HEC. “Such partnerships are important if we wish to democratize the data on observation from Earth and attract new potential consumers of data and space services,” said Guido Vingione, Director of Commercial Development at Serco Space.