Tribute to Pierre Bellon (H.54), founder of Sodexo and Major Donor of the HEC Foundation

The embodiment of a self-made man à la française, this great captain of industry created his company from nothing. Half a century later, it has become the number one in corporate food services. A loyal and generous donor of the HEC Foundation, Pierre Bellon died on January 31, 2022. 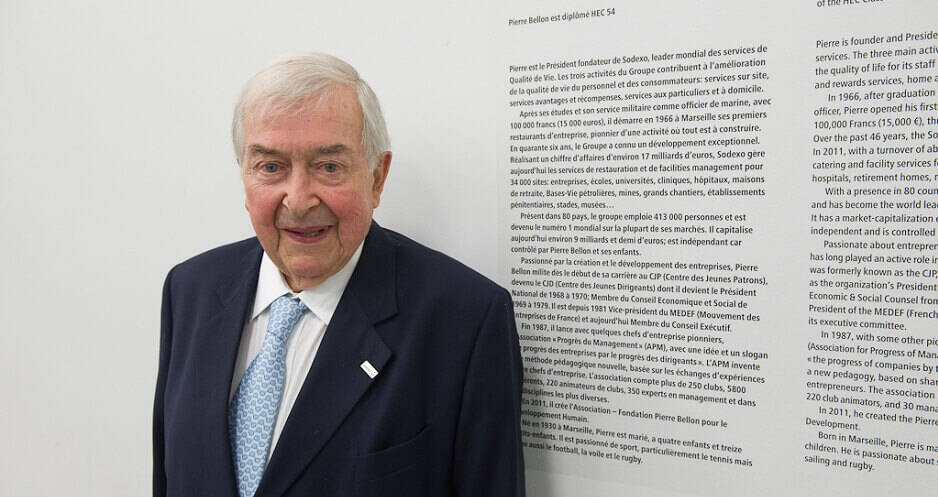 A giant. Few French businessmen can claim to have had a career like that of Pierre Bellon (H.54), who passed away on Monday January 31 at the age of 92.
He founded Sodexho in 1966 (later to be renamed Sodexo), and remained at the helm until becoming the honorary president in 2005, closely connected to the company he created from scratch. Nowadays, the leader in corporate catering employs 412,000 people in 56 countries, with market capitalization of over €12 billion.
“Our father was a builder, a pioneer, a free spirit who was never scared to take risks,” describes his daughter Sophie Bellon, chair of the board and interim group CEO. Everyone who knew him remembers his joviality and insatiable curiosity, not to mention the gift of the gab that allowed this young entrepreneur from Marseille to build a food & beverage empire bit by bit.

A spirit driven by action

Pierre Bellon’s life could be the subject of a novel. Born in 1930 in the city of Marseille, he lost his mother at the age of 10, right when starting at a Jesuit college. He quickly realized that his dream was to become an entrepreneur like his father, Félix Bellon (1905-1988), who founded a company specialized in catering for ocean liners and cruise ships.

For the young Pierre, studying at HEC was an important part of his path: receiving his degree in 1954 would remain one of his greatest joys. “Even though he always modestly said that his grades weren’t very good!” now recounts Daniel Bernard (H.69), President of Provestis and Honorary President of the HEC Foundation, remembering a man who was “agile and clever, Marseillais to the bone, and deeply attached all his life to the company he created. His DNA was the company’s DNA, and vice versa.”

An observation shared by Dider Pineau-Valencienne (H.54), his classmate: “Pierre was a lifelong friend. When I first met him at HEC, he was successful in everything he tried. When he got it into his head to try tennis and football, he quickly became one of the best! For me, Pierre had a huge spirit, driven by action.”

A Marseille native taking on the world

This spirit was very quickly applied in the field. With a 100,000 francs loan from his father, Pierre Bellon created his meal-tray company Sodexho (named for “société d’exploitation hôtelière” or hotel operations company), drawing inspiration from fast food pioneer Jacques Borel.
It was a modest beginning: Pierre Bellon delivered the meals himself with his van in Marseille. But very quickly, the company took off. In1964, he got the contract for the new cafeteria at the Atomic Energy Commission in Pierrelatte, in the Drome region. This was the first stone in his mass catering empire, which he managed “down to the last dime”, always preferring to develop through internal growth rather than acquiring debt.

Even if he would confess with his characteristic humor that “speaking English was not exactly his strong suit,” Pierre Bellon made Sodexo an international giant of the sector, in particular by acquiring British firm Gardner Merchant in 1995 and the catering branch of the American company Marriott three years later.
At the same time, he was a truly committed entrepreneur, campaigning from the start of his career with organization Centre des Jeunes Patrons. Later, he would become a board member of the CNPF, then the Medef, rising to become vice-president from 1980-2005.

His involvement with HEC Paris

In homage to this man, who left a lasting impression on all our lives, and his exemplary commitment, the Auditorium in Building S (opened in 2012) was named the Pierre Bellon Auditorium. And, in 2015, he awarded the Doctor Honoris Causa of HEC, alongside Philippe Foriel-Destezet (H.58 ✟), Daniel Bernard (H.69) and Didier Pineau-Valencienne (H.54).

With the news of his passing, the entire HEC community is in mourning. Pierre Bellon was one of the school’s emblematic graduates, who contributed greatly to both developing and promoting HEC. “Pierre was always one of my role models. With him, you could learn by doing as he did,” remembers Jean-Luc Allavena (H.86), Honorary President of the HEC Alumni Association and HEC Foundation.
“We built a very close friendship, enhanced by our shared Mediterranean roots: he is from Marseille, I from Monaco... In the early 2000s, when I told him about the project launching the major fundraising campaigns for equal opportunity, entrepreneurship and HEC development, he said to me straight away: ‘When you’re ready, you can count on me’”. A generous man of his word, Pierre Bellon would be one of the ten founders who made the first collective donation to HEC of €2,000,000 in 2005.

And this commitment continued when Daniel Bernard launched the next campaign in 2008-2013: “He was one of the first alumni to give back to the school that trained him to support his ambitions to the fullest,” he remembers. “In particular, we owe to him the funding of the HEC Alumni headquarters on Avenue Franklin-Roosevelt, along with Didier Pineau-Valencienne. We owe him so much. I remember how touched he was when we awarded him the honorary doctorate from the school....”

A new stage in his commitment began in 2018, when Pierre Bellon created a fund to support initiatives promoting equal opportunity and diversity at HEC Paris, by financing scholarships in his name. Olivier Sevillia, President of the HEC Foundation, and Eloïc Peyrache, Dean of HEC Paris, also wished to pay homage to him: “Pierre was a great figure in our community, with an incredible career as an entrepreneur and enormous generosity towards the School, making a great impact on HEC’s evolution. Today, he is one of the HEC Foundation’s greatest sponsors, and his generosity gave our school new, historic momentum.” Father of four and grandfather of thirteen, Pierre Bellon marked his company with his own unique stamp, like the entire HEC community. He embodied the school’s entrepreneurial spirit, which is now viscerally anchored as one of our values. He has left an incalculable mark.

We are all extremely grateful for everything he did for HEC, for our Foundation and for our community, particularly in the support he was able to provide to deserving students. Because scholarships change the lives of students who, without financial aid, would not be able to pursue their studies. This makes it possible for them to thrive in their course and make professional choices that are truly right for them. By creating this scholarship fund, Pierre Bellon has invested sustainably in the School’s future and provided unmeasurable support to HEC students. Thank you Pierre!