What is social business?

There is currently no single definition of “social business”, but the most prominent one is that offered by Nobel Peace Prize laureate Muhammad Yunus. He defines social business as a business » which objective is to solve social, economic and environmental issues affecting humanity: hunger, homelessness, illness, pollution, ignorance,…”.

Social businesses can provide the poorer populations with access to funds, goods, and services they could not otherwise afford, as well as facilitate their access to work. Multinational companies' engagement in social business has become a noticeable trend in recent years.

How can one define “social business”?

Broadly speaking, “social business” is a form of business striking a balance between social objectives and financial goals, situated somewhere between profit-maximizing business and the non-profit sector.(1) When understood in such broad terms, social business represents a significant sector of the economy: In the U.K. for instance, according to precise estimations, social enterprises employ 5% of the country’s workforce (2 million people) and represent 3% of its GDP (£60 billion).

Yunus sees social business, as an alternative and potentially more useful way for philanthropists to place their money: Rather than making a one-time donation, they can invest in viable businesses generating recurring benefits. Potential profits are reinvested in the business endeavor itself rather than paid out to its owners, allowing to expand the produced positive social impact.

How does social business differ from conventional for-profit business?

As compared to regular for-profit business, social business inverts the relative priorities of profitability and social impact: The creation of social wealth moves into the foreground, becoming the primary focus of interest and activity.

Reversely, profitability is seen as a mere means to that end, sought only to the extent that it assures the financial viability of the business endeavor.

Importantly though, social business is still “business”, not charity. The owners of a social business are not philanthropic donors: Although they do not receive a monetary compensation for their investment, they are still entitled to recover it.

Hence a social business must be financially self-sustaining, requiring from those who run it a series of conventional business capabilities, such as market oriented thinking, innovativeness, and a managerial mindset. 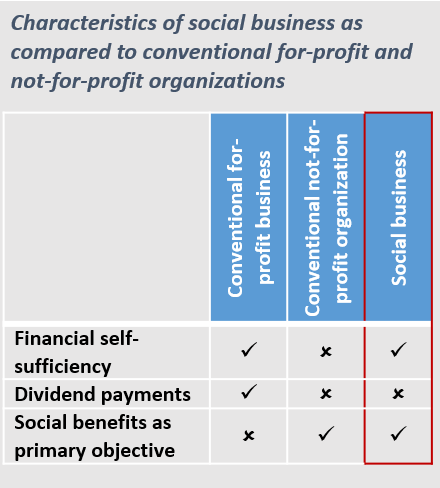 What welfare benefits does social business generate as compared to conventional for-profit ventures?

Social business aims at solving societal issues that neither states nor civil society have been able to successfully tackle by themselves.

Such specificities as the social goal orientation and the renunciation of dividend payments as well as the efficiency of these market approaches make it possible. In other words, the surplus value generated by social business takes the form of social profit (e.g. better purchasing terms or employment conditions) instead of capital growth.

Who engages in social business?

Social business is primarily conducted by social enterprises that are entirely geared to that purpose and financed by non-dividend paying equity.

A good example is the micro-credit pioneer Grameen Bank, which was created by Mohammed Yunus in 1983.

In recent years, a small but growing number of publicly listed corporations has decided to enter the field of social business, by creating separate lines of products and services specifically targeted at poorer sections of society and produced and distributed on a “no-loss-no-gain” basis. Danone was among the first of these companies. In 2006, it liaised with Grameen Group to create Grameen Danone Food, a joint venture providing  rural populations in Bangladesh with affordable dairy products, enriched in nutriments. In subsequent years, companies like Veolia and Renault followed Danone’s example.

Some companies criticize Yunus’ understanding of social business as being too narrow, since it excludes investors willing to invest in impactful activities but still expecting some return on investment. Organizations such as the French Development Agency (AFD) accordingly adopt a somewhat more relaxed understanding of “social business”, allowing   dividend payments.

Generally speaking, successful social businesses do not simply replicate or marginally adapt existing business practices: They are often based on innovative business models, entirely geared towards best serving their target beneficiaries. Several key requirements are needed to build up such a successful social business model: encouraging social impact-oriented shareholders that fully endorse the business endeavor, and establishing partnerships that bring complementary resources and expertise. These partnerships can be established with other companies, public institutions and civil society organizations. They work in a “co-creation” model, as promoted by the French Action Tank Social & Business.(3)