Lobbying for Change: Find Your Voice to Create a Better Society

"How to make a better society? Turn all of us citizens into lobbyists." This is the game-changing theory put forward in Alberto Alemanno’s recent book, “Lobbying for Change: Find Your Voice to Create a Better Society” (London: Iconbooks), which was launched at the Royal Society of Arts in London, then presented in New York, Melbourne, Tokyo, San Paulo, and still presented all over Europe. Interview with the author on his recent book mixing political theory, public policy and behavioural sciences, and inspired by his own public interest work. 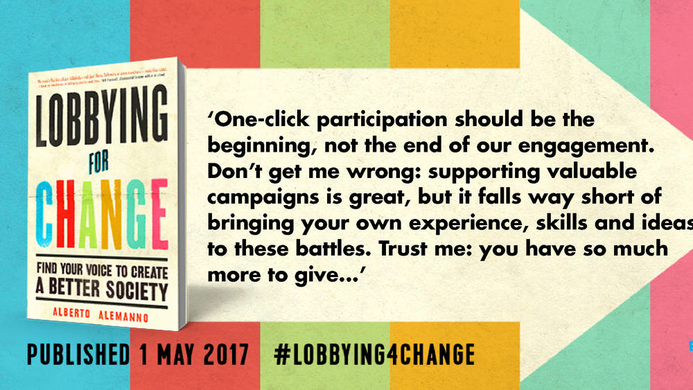 Knowledge@HEC: Why this book, and why now?

Alberto Alemanno: After “liking”, marching and voting, the time has come for citizens to lobby. Indeed, many democratic societies are experiencing a crisis of faith. Citizens are making clear their frustration with their supposedly representative governments, which instead seem driven by the interest of big business, powerful individuals and wealth lobby groups.

Elections have become tightly controlled performances, which are increasingly dependent on data-driven political marketing via social media. No surprise that we have also become more cynical about the value of democracy as a political system, thus throwing into doubt the belief our actions can influence public policy. This largely explains our growing feeling of powerlessness.

Yet, if there’s anything we have learned from recent events – from Macron’s Presidential victory to the #MeToo Movement going through the Brexit referendum –, it’s that citizens have a growing desire to contribute to the political debate through unconventional means of participation, and that they deserve the means to do so.

Research supports this claim by demonstrating that societies that enable citizens to be assertive and critical of public authorities tend to have governments that are more effective and accountable. What better way then to render citizens assertive than to turn them into lobbyists?

So citizen lobbying is the new theory and practice for active citizenship?

Yes. While most people associate lobbying with “bad guys” such as Big Tobacco or powerful financial interests, I believe that lobbying can be a powerful force for good. Citizen lobbying might sound like an oxymoron. Surely, lobbyists represent the interests of the few rather than the many. That needn’t be the case.

Organised interests, notably corporations, have historically monopolised lobbying, but the same factors that have prompted the rise of direct democracy movements and online petitions mean lobbying itself can be democratised. Indeed, thanks to the information revolution on internet, lobbying is no longer the prerogative of well-funded groups with hundreds of thousands of members and myriad political connections.

How can we lobby as a citizen?

A citizen lobbyist taps into the repertoire of techniques generally used by professional lobbyists to promote a cause they care about deeply. It is more than merely voting, donating, or signing a petition. Here, citizens set the agenda and prompt policymakers to act, or react to a policymaker’s agenda with potential solutions.

Thus, a citizen concerned about fracking of shale gas might go to a protest or campaign meeting, but to think like a lobbyist means filing requests for access to documents to learn government plans, identifying key decision-makers to lobby, and preparing an advocacy plan to counter lobbying from corporate interests.

This new, bottom-up form of lobbying is illustrated by several successful instances in the UK, Europe and around the world that are narrated in the book.

Think of Max Schrems, the Austrian student who challenged Facebook’s use of private data and won. My own students at HEC Paris have got involved too. They petitioned the EU Commission to put to an end to mobile roaming charges in 2012, adding their voice to a growing clamour that eventually forced a change in policy. 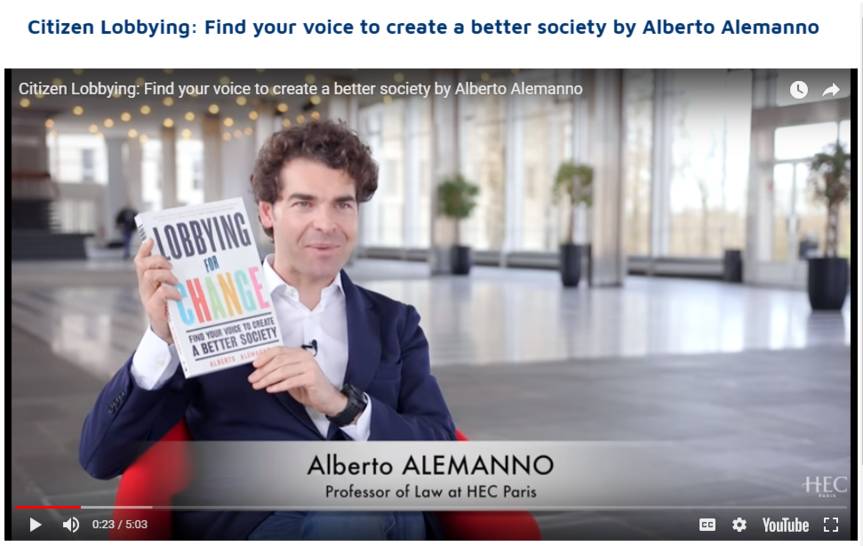 Why should we lobby as a citizen?

Lobbying by citizens can provide the missing, trust-based feedback mechanism to their elected representatives. For this to occur, lobbying needs to be demystified.

Much of the political engagement we see is about eliciting clicks and driving emotions; lobbying, by contrast, is rooted in genuine and meaningful efforts to meet achievable goals.

First, lobbying is not only legitimate but is also essential in a democracy - contrary to conventional wisdom. Although we have never enjoyed (at least on paper) so many opportunities to participate directly in local and national affairs, my book demonstrates that there exist multiple avenues of participations – ranging from public consultations to requests for access to documents, from administrative complaints to strategic litigation – open to citizens today. Yet, they remain little known and largely underused, and what is worse, often mobilised by major corporate powers in forms of astroturfing.

Third, such lobbying has pedagogical function. By gaining exposure to the policy process, citizen lobbyists learn how government works and become aware of the inherent complexity and numerous trade-offs decision-makers make.

At its heart, citizen lobbying is not really about giving everyone an equal voice but about delivering a plausible, legitimate form of civic participation that complements rather than antagonises representative democracy. Much of the political engagement we see is about eliciting clicks and driving emotions; lobbying, by contrast, is rooted in genuine and meaningful efforts to meet achievable goals.

I predict that should citizen lobbying emerge as a successful model of participation, it could act as a credible, effective and powerful antidote to growing populism and pave the way to a new voter-representative relationship. Ultimately, turning yourself into a citizen lobbyist will help you not only revive our fragile civic life, but also give more meaning to your personal life.

Lobbying could act as a credible, effective and powerful antidote to growing populism and pave the way to a new voter-representative relationship.

Citizen Lobbying: Find your voice to create a better society by Alberto Alemanno
“We need effective citizen lobbyists - not just likers, followers or even marchers – more than ever. I have no hesitation in lobbying you to read Alemanno’s book” - Bill Emmott, The Economist.
Related topics:
Law
Video
Download & Print
Share
FACEBOOK
TWITTER
LINKEDIN
EMAIL