Workers Could Feel Safer with Robots Thanks to Virtual Reality

Robots are making their way into diverse fields of work but human workers often still feel unsafe working alongside them, regardless of the true levels of risk. Sangseok You (Assistant Professor at HEC Paris) and colleagues have used virtual reality to explore how humans can be made to feel safer while working with robots. 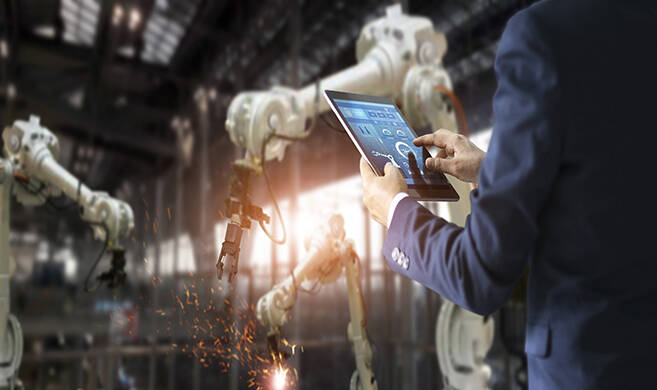 We're not yet letting Robocop police the streets but robots are increasingly used in industries where they can replace humans for dangerous or repetitive tasks. In fields of work such as construction and manufacturing, robots free up workers from tasks such as spraying paint, protecting them from noxious fumes, and allowing them to be better utilised in more highly skilled work such as design roles.

Yet, often this means humans must now work closely alongside robots, putting themselves at risk. In December 2018, 24 workers were hospitalised at an Amazon warehouse after a robot accidentally pierced a can of bear repellent at the Robbinsville, New Jersey, facility. In 2015, a worker was killed by a robot while working in a metal factory in India after a welding stick on a pre-programmed robot pierced the 24-year-old worker’s abdomen. In the same year, a 21-year old technician was killed by a robot at a Volkswagen plant in Germany when he was struck in the chest by equipment. Thankfully, deaths like these are exceedingly rare. It is in fact eight times more dangerous to work in a bar in the US than in the manufacturing sector, according to US government data.

Being safe is not the same as feeling safe

While safety standards continue to improve as robot technology advances, there is now a major gap between the perceived levels of risk workers face, and the true levels of risk posed by robots, with fear often disproportionately high when compared to the real level of risk involved.

To date, the existing literature on robot safety has tended to focus on technical issues while largely ignoring the issue of perceived safety. This may be down to the fact that designing prototype robots and scenarios to experiment with is expensive and time-consuming. This means that concerns that aren’t considered to be crucial may be neglected. These concerns are important however, because heavy-duty machinery is one of the leading causes of accidents on construction sites and the fear of being injured by this equipment is a real concern for construction workers. Living in fear is not only unpleasant and unhealthy but may lead workers to take unnecessary risks or leave their industry.

The benefits of a virtual world

To help solve this problem, we used virtual reality to experiment with ways to encourage workers to feel safer while working around robots. Virtual reality has recently been shown to be effective for helping children with autism confront phobias by exposing them to their fears in an immersive virtual environment. This allows them to go on to successfully confront their fears in real life. Could the same technology help workers feel safe around robots in a similar way?

Living in fear is not only unpleasant and unhealthy but may lead workers to take unnecessary risks or leave their industry. To help solve this problem, we used virtual reality to experiment with ways to encourage workers to feel safer while working around robots.

An immersive virtual environment brings several benefits over normal prototype experiments that lend themselves to robotics, including lower production costs, being more realistic, and having better experimental control. The cost of a virtual reality experiment is limited largely to the time taken to code up an environment. These costs are negligible when compared to building a prototype machine and testing it under laboratory conditions.

Understanding the perceived safety of workers

In order to help assess perceived safety and its impact on collaboration between humans and robots, we designed the Robot Safety Acceptance Model (RASM), which has three key assumptions:

To test our model, we created an immersive virtual environment in which 30 students at an American university could experience collaborating with a robot to build a wall. The human and the robot would work together, each placing a block on the virtual wall every seven seconds. This was done either in the open or with the human separated from the robot by a barrier.

As expected, we found that the students felt safer when there was a physical barrier between themselves and the robot. Our results suggest that this effect was mediated by team identification and trust in the robot.

Team identification is the degree to which an individual feels a connection or strong bond. Besides, trust can be defined as the degree to which an individual believes the robot is capable, credible, and reliable. We also found that if the students perceived the work area to be safe then they would be more willing to work with the robot in future. When fear and worry are reduced it becomes easier for a human to form a common identity and build trust in a robot.

Our findings suggest that businesses would benefit from installing safety fences between robots and humans and ensuring the movement flow of robots and humans do not overlap. Virtual reality could be a cost-effective way of testing ways to ensure this without going to the expense of building a real-world model for each test case.

We developed a conceptual model to help understand what circumstances make humans feel safe while working in close proximity to robots. We tested our model using virtual reality to create an immersive virtual environment.

Our research has implications for industries such as construction that are seeking to employ robots to work alongside humans. Our findings suggest that businesses would benefit from installing safety fences between robots and humans and ensuring the movement flow of robots and humans do not overlap. Virtual reality could be a cost-effective way of testing ways to ensure this without going to the expense of building a real-world model for each test case.
Based on “Enhancing perceived safety in human–robot collaborative construction using immersive virtual environments” by Sangseok You (HEC Paris Business School), Jeong-Hwan Kim, SangHyun Lee, Vineet Kamat and Lionel P. Robert Jr. (University of Michigan), (Automation in Construction, vol 90. Pgs. 161-170, 2018).
Related topics:
Information Systems
Technology and Innovation
Download & Print
Share
FACEBOOK
TWITTER
LINKEDIN
EMAIL