HEC Paris and the European League for Economic Cooperation (ELEC) joined forces to invite Christine Lagarde for the year’s first HEC Talks. The president of the European Central Bank talked to a hybrid audience of around 10,000 people on “Moving forward: the Euro and the European economy in a changing world”. This was followed by a frank debate that ranged from monetary policy to cryptocurrencies and a woman’s place in the business world. 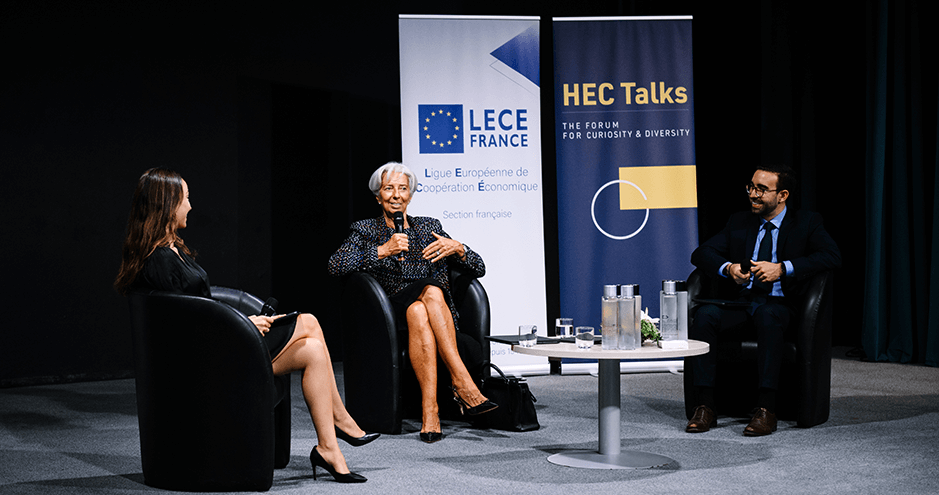 “We’re back from the brink but we’re not of the woods. Our economic forecasts show we’ll be at the pre-COVID levels of growth by the end of this year, not mid-2022, as we first forecast. This is not 1929. Why? Because we went fast, we went big - and we went together.” The opening remarks of ECB head Christine Lagarde betrayed a more poetic past in which the politician and lawyer had shone as a 1977 graduate of American literature at Avignon Art College. But behind Lagarde’s mastery of the rhetoric were strong messages on the global economic crisis, monetary policy and the Euro, digital currency, the green economy – and, most emphatically, women’s leadership. 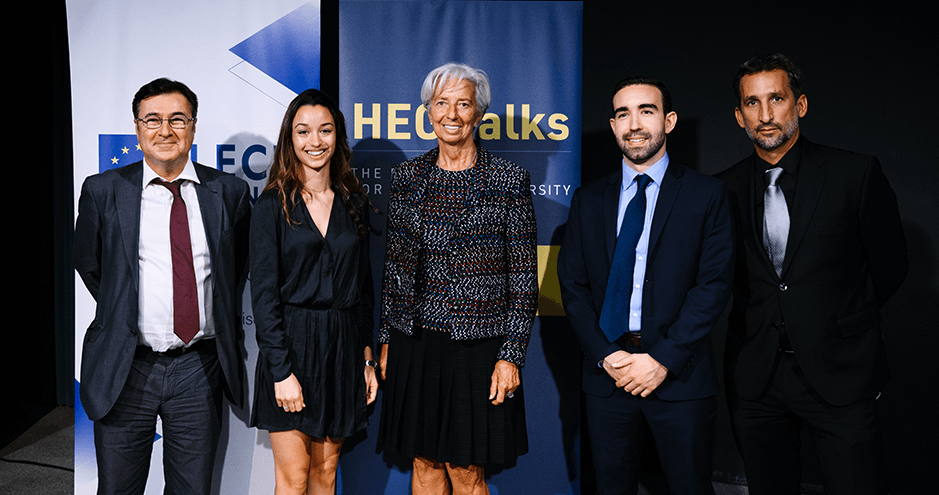 This last issue emerged immediately after the world’s second most powerful women had finished her 10-minute opening statement. “While women account for 51% of the EU’s population, they only represent 18.5% of Europe’s government leaders and 7.5% of the managing directors of the largest listed companies in Europe. What is the best way to ensure women ascend to positions of leadership - quotas?” asked off the bat co-moderator, Cristobal Santisteban. With the candor that typified the 90-minute exchange at Blondeau Amphitheater, Lagarde admitted her position on quotas had shifted on the question: “It was when I became managing partner at Baker & McKenzie  (ed, in 1999) that I realized that quotas are an absolute necessity. Otherwise, we’ll be waiting around for 100 years,” she added. “Quotas have helped four countries in the Euro region to reach 30% women on boards and we’ve exceeded those levels internally at ECB.” The G7’s first-ever women finance minister acknowledged that it was important to inspire other women: “To be frank, it’s not a matter of choice. But, as a former synchronized swimmer, I learnt how to smile. So, I just grit my teeth and accept being a role-model for other women.”

Almost 50 years after winning bronze at France’s synchronized swimming championships, it was at her kitchen table that Lagarde and her ECB team cooked up a plan to bring together fiscal and monetary policies in an unprecedented fight to shore up Europe’s 2020 crisis. “We elaborated a two-fold plan to make sure we didn’t have fragmentation, to guarantee that liquidity was flowing in the system and make sure household companies could have access to financing and loans. That precipitated a miracle that went quickly and spread wide.” As a result, families lost 0.3% of their real disposal income, seven times less than the post-2008 crisis. 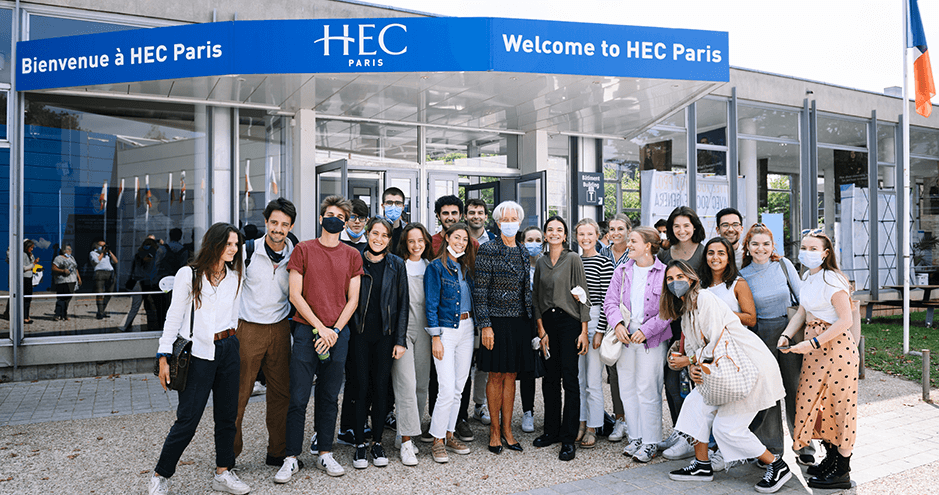 That 2008 Lehman Bros meltdown, Lagarde said, had taught her key lessons: “It showed me that we didn’t have the luxury of time, we couldn’t afford to procrastinate and we needed new targets. This is something that’s reflected in the way ECB programs like SURE were structured. Our focus was not on keeping enterprises or banks afloat, like in 2008. Our focus was, and is, on people, thus preserving the economic fabric of our society.” At present, Lagarde maintained, the way to go forward is digital and green: “For the first time, Europe is putting money where its mouth is. The 27 members have agreed on a €750 billion joint borrowing program, allocating resources on the basis of who is hurting most. Italy, Spain, Portugal, Greece will be recipients of grants and affordable loans. The digital and green frameworks will dictate where the Euros will go. This will help reduced inequality and achieve green objectives to face critical and terrifying challenges.”

The hundreds of students, both online and present, peppered the former IMF president with too many questions for the moderators to relay. “Your thoughts on Bulgaria joining (the EU) in 2024?” “Is China taking a decisive advantage after introducing the digital Yuan in 2020?” Will EU digital currency spell the end of commercial banks in the EU zone?” But the question that came back with persistence was her position on cryptocurrency. Christine Lagarde responded with a smile: “I’m quite critical, and I know that I will instantly be hit by a wave of ‘Oh! What a horrible person’. But cryptocurrency is highly speculative, consumes an enormous amount of energy and facilitates transactions of a very dark nature. You cannot claim it’s a currency and we won’t allow it to deceive customers.” 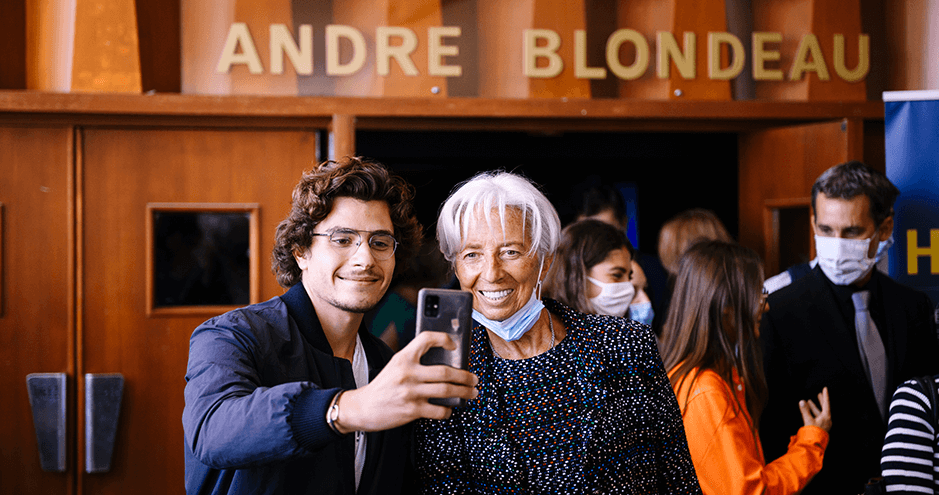 After the debate, co-moderator Carla Richard shone with relief. “It went really well” said the current president of HEC Débats. "Christine Lagarde, well, you can feel her power. Despite her responsibilities, you sense her goodwill and compassion. If we had had more time, I would love to have found out what she was like at our age. As students, we’re faced with such uncertainty – was it the same for her?” M1 student Louis was impressed by the ECB commitment to climate change. However, he regretted that Lagarde did not answer a question on tax havens: “I know fiscal policy is not ECB’s domain, in the strict sense. But she did mention that they’re working on joint monetary and fiscal programs, so taxation could soon be part of the ECB mandate.”

The head of the central bank of the Eurozone was visibly pleased with her visit to the campus. “What I found amazing,” Lagarde confided after the exchange, “was the quality of the students’ questions. They clearly have up-to-date knowledge of monetary and European issues. And they’re interested, that’s fantastic. It gives me faith in our youth!”