Purposeful Leadership Program Takes Off with a Bang

A year after creating the Joly Family Endowed Chair in Purposeful Leadership, HEC Paris launches its three-year sense and leadership program, destined for the entire HEC Grande Ecole 2019 intake. A pioneering effort aimed at sensitizing participants to values that have become crucial to the world of business and entrepreneurship. 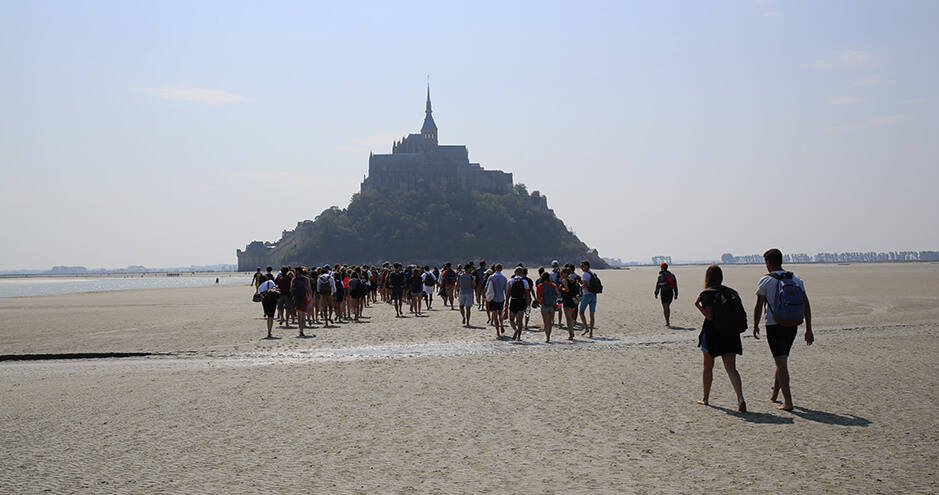 Few graduates of the French CPGE prépa system would have quite imagined this off-campus introduction to France’s top business school: a physically arduous induction into a unique program that fosters a more humane yet economically sound form of business leadership. It began with a four-day seminar in August at one of three rural sites far from the Jouy-en-Josas campus. Freshly out of a two- or three-year prep school program known for its intensity and competitive nature, all 400 freshmen in the L3 Grande Ecole were challenged to find deeper meaning behind their personal choices, studies, work, environment, rapports – in sum, their lives.

To achieve this, Rodolphe Durand (Academic Director of the school’s S&O Center, who also holds the endowed Joly Chair), and Executive Director Cécile Lavrard-Meyer de Lisle, split the students into three equal groups. One tripped north to the Mont-Saint-Michel Bay to explore the quest for the Self; a second went to Saint-Cyr-Coëtquidan military camp to better understand collective action; and a third questioned environmental degradation, leadership and organization within the grandeur of the Chamonix Alps. 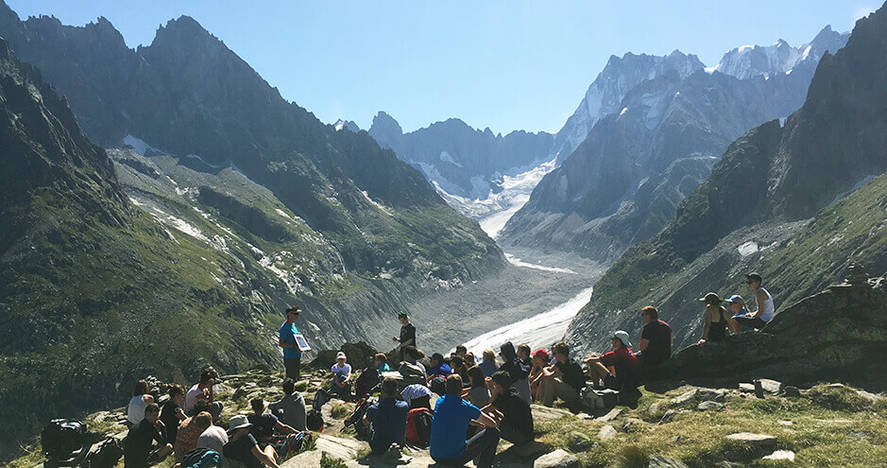 Local and Global Engagement for Climate

“What strikes you from the get-go in Chamonix is the challenge posed by global heating,” said Bénédicte Faivre-Tavignot, S&O Executive Director who accompanied the 126 students to the Alpine town. “Our four days here try to answer a series of questions: what can industry contribute in limiting this global heating? And what is its role in reducing inequality, a question being debate right now at the G7 summit in Biarritz?” To answer some of these questions, local mountain guides, business people, researchers and academics accompanied the students. After an arduous walk towards the Mer de Glace, they mused over the environmental and philosophical challenges posed by a glacier melting by 4-6 meters per year:

“It opened my eyes on what economic actors must do to manage these challenges, and the solutions local business can bring,” said Victoire Dumon. “Given the urgency of the situation, the Purposeful Leadership program seems to me to be coherent,” added Eléonore Fontaine. “It adapts to the modern world and all its problems. We’re seeing all the commitment of HEC alumni, they are leaders seeking to explore what purpose is all about. There is a genuine return aimed at changing the school and helping it to adapt (to these values). So, as I said, there is a true coherence in this program.” 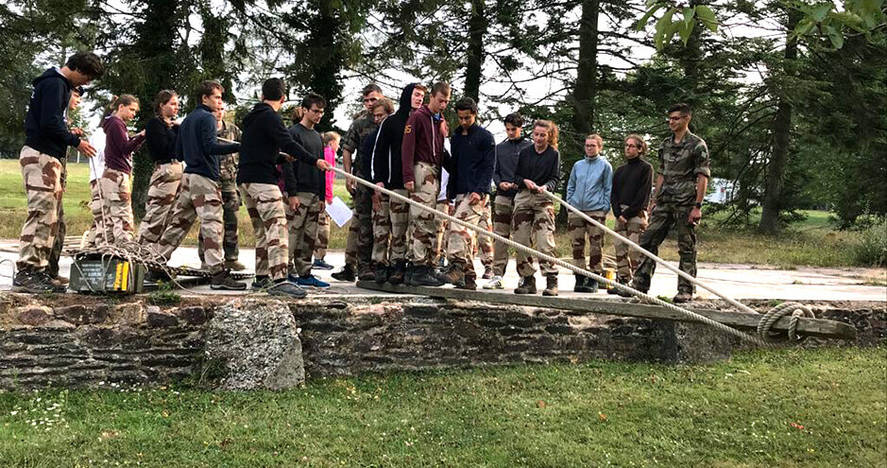 On the other side of France, Xavier Boute led his 145 HEC students to France’s top military academy (l’Ecole Spéciale Militaire) set up in the Morbihan campus in Brittany. “At St-Cyr, students learn about the command structure, leadership,” he explained. “Which translates as treks, pushing beyond one’s boundaries and tests. The exercises are always guided towards collective action. This isn’t a commando training session but we push the students towards collective decision-making under duress, when they are tired. You don’t have the same reflexes or patience and organization in those situations.”

“It taught me how to challenge myself, whilst gaining knowledge about the dynamics of a group,” said 20-year-old Alexis Gourevitch. “At the moment, the structure at HEC is designed for team managers,” added Philippe Dugarreau. “But how is it designed? Why? This seminar forces us to ask these questions, that’s good. Furthermore, the physical demands of the seminar helped us to bind together for a common cause.” 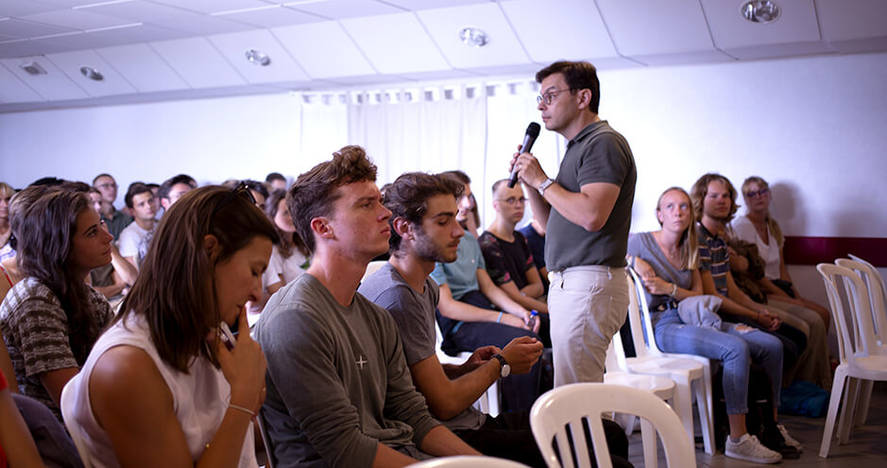 Finding the Self in Quicksand

110 kilometers northwest of St-Cyr, Rodolphe Durand prepared for the arrival of his 114 students. “These youngsters haven’t had time to think through their lifetime project these last two-three years,” he explained. “Here at Mont-Saint-Michel we help them find themselves. The way they have been recruited imposes outside pressures; they are therefore conformist and relatively similar. Our work here is designed to help them find their individuality. By uncovering their differences, they can work on a personal project, a professional one, a project for their lives.”

François Lamotte d’Argy has experienced this journey to the Self. He enjoyed a successful academic career at a Paris business school and launched into a business career in Canada. However, a series of twists-and-turns in his belief system and values brought him back to his grandparents’ Normandy region where he has become a successful independent guide. “A program like this one helps these youngsters to reconnect to true values centered on knowing oneself and on an appreciation of the environment,” he explained, striding in front of the straggling group of HEC students. They had been enjoying the arduous pleasures of walking barefoot in the sands of the Mont-Saint-Michel Bay under a beating sun. D’Argy had been conducting exercises which included survival methods to combat the quicksand, wading across the rising tide and detecting manmade pollution. “These students must think through the final objectives of their professional commitment. Reflect about the links between economic activity and its consequences on the world around us. They must leave aside individualism and think collectively for the good of society” For many of the students, the intense morning exercise was one of the highlights of their stay.

“What do you do with your failures?” inquired mentor Antoine Guggenheim, a consultant specially recruited from the Sis-up consulting firm. He scrutinized the blank faces of a dozen participants sitting in a semi-circle near the GR 223 path dubbed “the most beautiful kilometer in France”.  Many were still catching their breaths after the rough seven-kilometer hike over the Champeaux cliffs overlooking the Mont-Saint-Michel Bay. “Yes, failure is a new concept for many of us gathered here, since we’ve enjoyed success until now. Yet, it is an essential part of our humanity and can serve as a launchpad towards leadership and empathy.”

Words which might sound like music to the ears of Hubert Joly. The “turn-around” executive returned to his former school in 2018 to set up a chair designed to refine a philosophy of business that has helped him transform Best Buy and Carlson Wagonlit Travel in the past decade. “You have to be true to yourself, including to your weaknesses,” he told HEC students in a recent interview published by HEC Stories. “In my case, I spent years correcting a big mistake: confusing a drive for performance with a drive for perfection. The biggest strength of a leader is to accept his own vulnerabilities and those of his employees.” 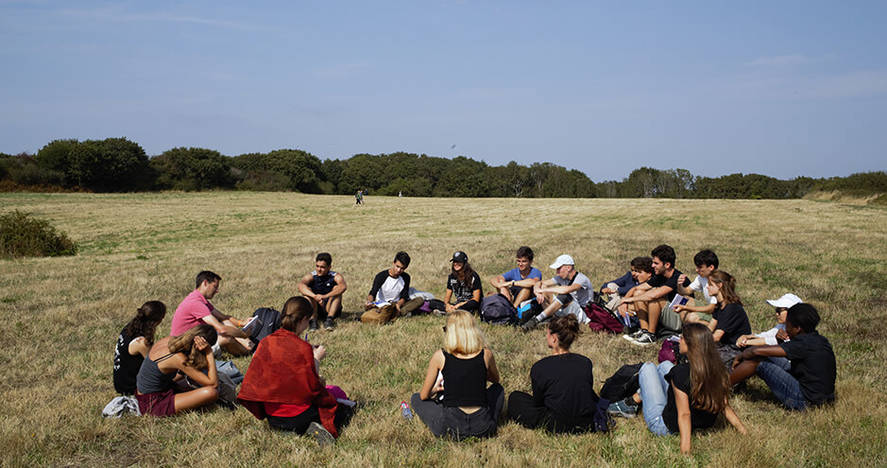 Since the landmark 2018 Joly agreement with HEC Paris, Rodolphe Durand and Cécile Lavrard-Meyer de Lisle have been working intensely on a mandatory program to develop this new vision of leadership based on the savoir être of a leader. Spread over three years, Purposeful Leadership is a deep immersion into how each of these future leaders should lead, while exploring their roles and responsibilities to society and business. “Our aim is to deepen this ‘knowing-how-to-be’, giving a sense of purpose with the help of human and social sciences,” explained de Lisle. “Students will use the inputs of a wide range of disciplines and confront their hypotheses with the realities on the ground.”

Year One of the program actually began within two weeks of successful students being ushered into HEC in July. Each one was sent a detailed booklet outlining the school’s new strategy around purposeful leadership and immediately inviting them to describe their own objectives: “Why do we work? What are the aims of a company? Where can we find meaning in work?” To help answer such questions, the students were invited to become familiar with the writings of Hannah Arendt, Aristotle, Emile Durkheim, Karl Marx, Paul Ricœur and many other historic figures. “By bringing in social sciences and humanities into studies on the world of management and entrepreneurship,” commented de Lisle, “we help to build a new form of leadership. This quest for a deeper meaning implies that the students emerge from a scholastic form of logic and confront the contradictory injunctions of the economic world.”

Rodolphe Durand insisted on the long-term approach to the program. “We will be guiding them throughout the next three years. Whilst thinking through their professional project, they will be exploring their vulnerabilities, their strengths, their responsibilities and their distinctive personalities.” 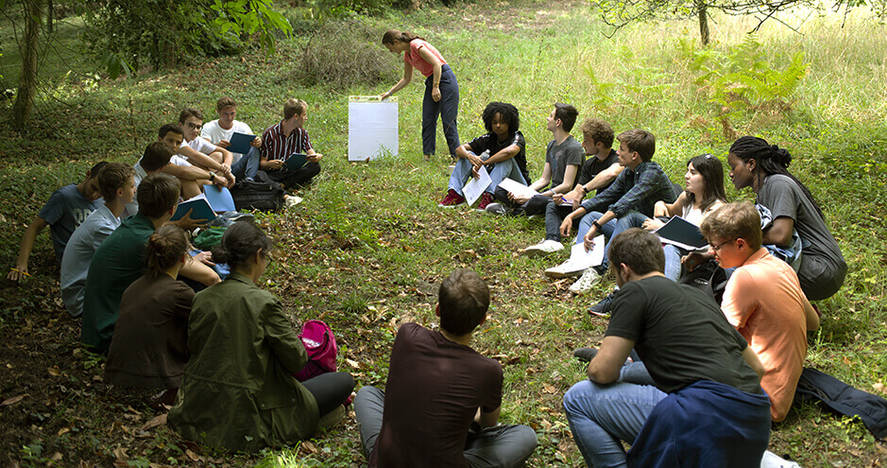 The four-day initiation to the course was followed a week later by four days of workshops, debates and conferences involving major French figures and CEOs from the world of business. It was kick-started by a workshop led by the Korn Ferry consultancy firm on development, including a playful attempt to sell “egg power”. “This is a wonderful initiative,” said Alice Risetti (H95) from Korn Ferry. “It compares so much more favorably to my initial experience here 20 years ago. Coming out of prep school, I felt quite disappointed by the first week here, which seemed devoted mainly to partying and venting. Here, students are immediately confronted with the REAL questions of purpose on an individual and collective level, leading to who do they want to become.”

The four days at Jouy were dubbed “Stepping Back” and included a wide array of testimony from CEOs who shared highly personal insights into their discovery of purpose. The likes of Antoine Lemarchand (CEO at Nature et Découvertes), Laurence Méhaignerie (Citizen Capital President), Emery Jacquillat (CEO at Camif Matelsom) and Valérie Mas (CEO at WeNow) delivered impressive testimony to their oft-meandering quest for purposeful leadership. “Today, we must reinvent the world of business,” underlined Jacquillat. “That’s what your generation is responsible for. And the most powerful lever for action is the link between your business and your clients.”

Testing Theories in the Workplace

“Stepping Back” also included informal exchanges between students and mentors to compare and contrast their respective seminars, each of which explored the pillars of purposeful leadership. The 400 students then divided themselves into around 100 groups of four in order to formulate a question or hypothesis inspired by the seminars and workshops. These are to be tested thanks to on-the-ground research and exchange with companies who are partnering up with the program. “At last you will be testing these ideas and theories in the working spaces afforded to you!” Xavier Boute told the assembled L3 promotion. “You will be interviewing leaders, experimenting your ideas, observing the dynamics of a company, NGO or association, initiating surveys and analyzing your results.”

Hubert Joly (H.81), Executive Board Chairman of Best Buy and Major Donor of HEC’s Foundation, created in July 2018, along with HEC Paris and the HEC Foundation, the Joly Family Chair in Purposeful Leadership.

Hubert Joly's exceptional gift and the commitment of Nicolas Giauque (H.93), Pascal Stefani (H.88) and Laure Fau (H.93) on this topic made it possible to set up a path on purposeful leadership for all the students of HEC throughout their studies.

This program was launched at the beginning of the academic year of September 2019 and is followed by the entire new graduating class. Read more about the HEC Foundation