President, HEC Alumni and member of the France Campaign Committee 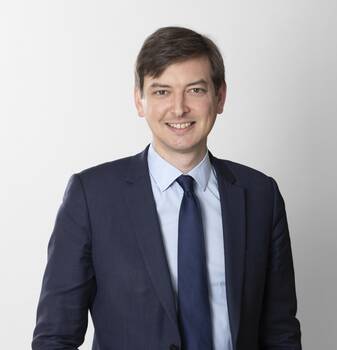 Our community, alive and vibrant, is a strong collective that is positioning itself as a player in the construction of tomorrow’s world and a real catalyst for equal opportunities. It is up to us to make it live throughout the world and to transform its values into actions!

A graduate of HEC Paris (2007) and a member of the Institut des Actuaires, Adrien Couret is the managing director of Aéma Groupe, the new mutual protection actor on the French market, born from the merger between Aésio Mutuelle and Macif in January 2021.

Adrien Couret joined Macif in 2008 and spent most of his career there until becoming its general manager in 2019.

Since 2009, he has led various strategic and development projects for the Macif Directorate General. In 2013, he was appointed Director of Strategic Coordination in charge of steering the Office of the Chief Executive Officer and the implementation of the Macif Group’s Medium Term Plan (2013-15). In April 2015, he was appointed Deputy Chief Executive Officer for Strategy, Transformation and Performance. His mission included the deployment of the #macifutur strategic plan and the launch of the Macif Group’s innovation initiative. In January 2018, he was appointed Head of the Personal Insurance Business Lines of the Macif Group, comprising the health/death & disability and finance/savings sectors. In this capacity, he is notably Chairman of the Management Board of Mutavie and pilot the project to build the joint group with the UMG Aésio.

In July 2020, he became President of OFI Asset Management, an asset management subsidiary of the Macif Group, after having been a director there since 2014.