In everyday technologies, learning algorithms are becoming ubiquitous. They are even changing the way laws and regulations are produced and enforced, with law increasingly determined by data and enforced automatically. In his study, David Restrepo Amariles investigates how learning algorithms are developing SMART Law to improve the quality of regulations and their enforcement, and how this can be achieved without infringing on our civil liberties and the rule of law. 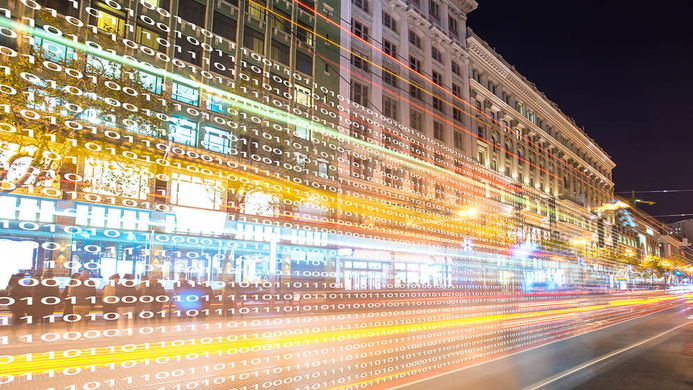 Law is changing. Scientific, Mathematical, Algorithmic, Risk and Technology driven law (SMART-Law) is becoming a reality. The driving force behind this approach are advances in learning algorithms and the big data that they create. “We are currently experiencing a paradigm shift in the way that regulation and law functions in our society,” explains David Restrepo Amariles. “We are moving away from the familiar democratic system where laws were created and enacted by parliament and then enforced by judges and police. Here, rules and facts were separate. With SMART law, rules are drawn from facts and execution of the law is automatic.”

What are concrete applications of SMART law?

Restrepo Amariles notes that SMART law is one part of the journey towards SMART cities, the first of which is Songdo in South Korea. “In such cities, everything is connected to the city system, and that system determines the rules and enforces regulation. For example, it is not possible to take the garbage out if it is not the right day, cars cannot drive faster than the speed limit, and in-car breathalysers prevent drunk-driving. This automated law enforcement means the law cannot be broken.” Even outside of SMART cities, there are many SMART devices in use that produce lots of data and are connected to the internet.

This data is then processed by algorithms, which are used to enforce legal rules. He notes, “In the UK, Her Majesty’s Revenue and Customs (HMRC) developed Connect, a software device used to help investigate tax fraud. This uses big data, collecting structured and unstructured data (such as that from social media and auction sites) to assess how well an individual’s lifestyle compares with their tax declaration. Today, approximately 90% of UK tax investigations are opened as an outcome of this software.”

Lawyers need to apprehend the problem posed by smart law from a technical perspective in terms of computer science.

How do learning algorithms function?

Some of these algorithms can learn. “The Connect software was programmed by humans to collect data and confront certain legal rules. As it uses learning algorithms, it is able to evaluate, for instance, tax payers' response to HMRC interventions through the Analytics for Debtor Profiling and Targeting (ADEPT) and use this new information to recalculate behavior models and risk profiles. In the short term it might also able to identify that people who regularly buy goods on certain auction sites are less likely to declare VAT and flag them for investigation,” he explains. The key here is that the algorithm is not given this information but instead uncovers it all by itself.

Do learning algorithms abide by the rule of law?

Restrepo Amariles wanted to find out how learning algorithms can be used to improve regulation. He also investigated the effects they might have on our civil liberties. Looking at smart devices in five different fields — intellectual property, tax law, commercial and financial law, security and law enforcement, and corporate compliance — he focuses on issues that might arise related to data protection, privacy, discrimination and due processes. He points to the Uber algorithm as an example of how learning can lead an algorithm to become discriminatory: “It allocates car rides based on proximity and driver rating.

However, if a driver of a certain ethnicity is consistently poorly rated, the algorithm may learn this discriminatory conduct of consumers and exacerbate its effects, instead of helping to revert them. In the end, the learning algorithm has learnt to behave in a discriminatory manner, affecting its supposed neutrality.” This will mean that such an algorithm may no longer comply with anti-discriminatory laws.

He then asks the question, “How can we hold the algorithm accountable for this discrimination?” In truth, once it has learnt, it is not only difficult to hold an algorithm to account, but also to assess if its actions are indeed discriminatory. It may be possible to find out through reverse engineering or undertaking a ‘black-box’ experiment whereby the algorithm is supplied with information and you see how it responds.

“We need to understand how to ensure algorithms are compliant with the rule of law, and also help make law more efficient,” Restrepo Amariles concludes. As this is a non-trivial task, he suggests that there should be a technical standard created that can be used across markets. Here, other algorithms could be created to test algorithm compliance with the rule of law. If they pass the test, they will be certified rule-of-law compliant. “Banning SMART devices to protect civil liberties would be dangerous and stunt innovation. Instead, a trusted system of certification should be created to protect individuals and industry.”

CSR and Legal Liability: How to Foster global Standards and Enforcement? Smart Law: Regulating by Big Data and Algorithms

Restrepo Amariles stresses a need for more data science savvy lawyers. “Lawyers need to apprehend the problem posed by SMART law from a technical perspective in terms of computer science. They also need to realize and understand that there is a very dramatic transformation taking place and the law must be adapted to take account of advances in computer science,” he states, going on to add: “It is key that the legal experts working in government, lawyers and in-house counsels receive more training related to SMART law.”

Restrepo Amariles’ study is based on a literature review of contributions in computer science, economics, law and sociology. It focuses on the analysis of certain SMART law devices implemented in five fields of law: intellectual property, tax law, commercial and financial law, security and law enforcement, and corporate compliance. He looked at the possible implications for the rule of law of learning algorithms that use inverse deduction, back propagation, genetic programming, probabilistic inference, or Kernel machines. His assessment was based on the widely accepted principles of data protection, privacy, non-discrimination, and due process in common law and civil law countries, including in the European Union.
Based on an interview with David Restrepo Amariles on his working paper “Law’s Learning Algorithm: Making Rules Fitter through Big Data”.
Related topics:
Law
Regulation
Data Science
Download & Print
Share
FACEBOOK
TWITTER
LINKEDIN
EMAIL