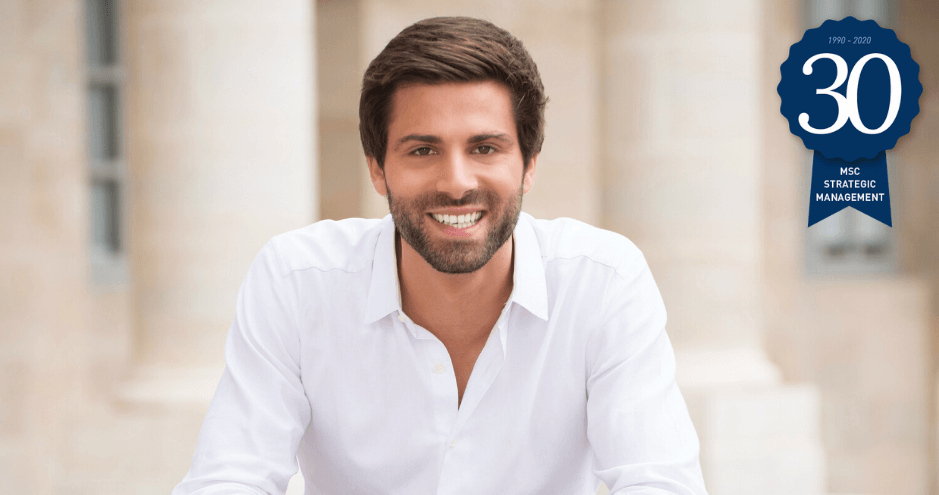 As a tribute to the 30-year anniversary of our MSc Strategic Management, we look back at the success of our graduates, zooming on two of our top high-flyers from each decade. We’re kicking off the series by reflecting on our most recent decade: the 2010’s.

Over the last seven years, Alex has been around the private investment block; having successfully participated in the acquisition of the largest European franchise of McDonald’s by 27, helped manage Richard Branson’s venture capital investments by 28, and launched his own fund dedicated to backing early-stage Deep Tech start-ups by 29, he has become a notable young figurehead in the investment world.

Alex always knew he would pursue a career in Finance. “I received my first Master’s degree from Imperial College Business School in Finance in 2013, which was a great start”, he explains. “But I didn’t just want to be a banker, I wanted to be involved at a higher strategic level. I decided I wanted to get into the world of investing, for which you must understand how companies can fit and be successful in a market. It’s very analytical and strategic.”

He joined the HEC Paris MSc Strategic Management shortly after to bridge the gap between his studies at Imperial College London and his investment aspirations.

"The program filled in my skill gaps perfectly – it gave me the global perspective I needed to effectively evaluate investment opportunities."

Striking gold from day one

It didn’t take Alex long to find his feet. After successful M&A roles at Edmond de Rothschild and Keensight Capital, he joined Terra Firma Capital Partners as an Analyst, where he participated in a plethora of successful private equity investments; one of the most notable being the successful acquisition of the largest European master franchise of McDonald’s. “It consisted of 435 restaurants across the Nordic region in total”, he elaborates. “It needed to be revived, so I also helped define a turnaround strategy for the master franchise.”

His keen eye for investment only snowballed from there; a year and a half later, he joined Virgin Management. As well as helping to manage venture capital investments for the group, he also sourced opportunities for Sir Richard Branson himself; growing an investment portfolio that held over 40 companies (including Wise (formerly Transferwise), Memphis Meats and, Ring and Slack), defining the allocation of Sir Richard Branson’s crypto-asset portfolio, and diversifying the group’s activities, he helped optimize the company’s investments greatly.

While at Virgin, Alex launched the ‘Young VC Dinners’. Starting with just a dozen people in London, he grew the network to be one of the largest and most active venture capitalist communities in Europe, with over 700 people from top VC firms, representing over $80b of AUM (Assets Under Management). Organizing monthly dinners for young venture capitalists to share and exchange, Alex has become a very influential figure within this wide-reaching network.

Investment for good: finding his purpose

With all this experience, in 2019, he decided to invest his skills in the issues he cared about most. “From my work at Virgin Group, I’d been exposed to the amazing impact investment can have on society, when directed in the right places. Their mission is to ‘change business for good’, and this mindset was applied to their investment strategy as well”, he explains. “I very much internalized this philosophy, and it was thanks to this that I co-founded an LA-based VC fund investing in AI and healthcare. However, after six months of fundraising, our cornerstone investor became critically ill and I decided to return to Europe and join forces with the stellar team at Luminous Ventures as a Junior Partner.”

As part of the team at Luminous Ventures, which is now raising its second fund with a target size of £60m, Alex’s mission is to invest in visionary founders looking to leverage technology to change the world in a positive way.

“New start-ups leveraging machine learning, quantum computing, and synthetic biology to solve large problems in healthcare, life sciences, and nutrition are our future – but they require a whole lot of capital to get off the ground.”

“I’m hoping Luminous Ventures can provide these innovative businesses with what they need, particularly those within the healthcare sphere. We have built a solid pipeline for which I’m identifying worthwhile startups to invest in, and I’m helping my partners raise the new fund’s capital, and so far, it’s all looking very positive with three investments already completed prior to the first close of the fund – so watch this space!”