An unprecedented 13 awards were attributed by the HEC Foundation for outstanding academic work from the school’s students and professors in 2020. The March 23 event was the 44th edition of the annual event, but the first-ever digital ceremony. Highlights included the Honorary Award, given to the school’s entire teaching staff for their “immense” work in demanding, COVID-related, circumstances. 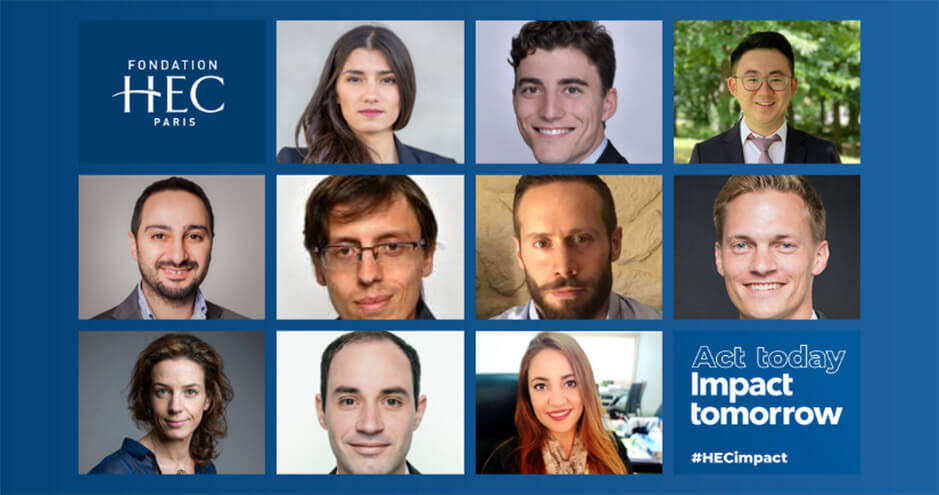 “Exceptional prizes for exceptional times.” With these words, HEC Foundation’s Executive Director, Delphine Colson, summed up the unique nature of Tuesday’s online award ceremony, which marked the development HEC has known in its research and interdisciplinary education. The Dean of Faculty and Research, Jacques Olivier, mapped out the quantum leap the school has enjoyed since former Dean Bernard Ramanantsoa launched ambitious policies in 1995 to put international research at the heart of HEC’s mission. “10 years later, we had climbed up to 88th in the world. 15 years after that, and we’re proudly sitting in 20th place. In 15 years’ time, I believe the Dean will also point to further progress HEC will have made!” 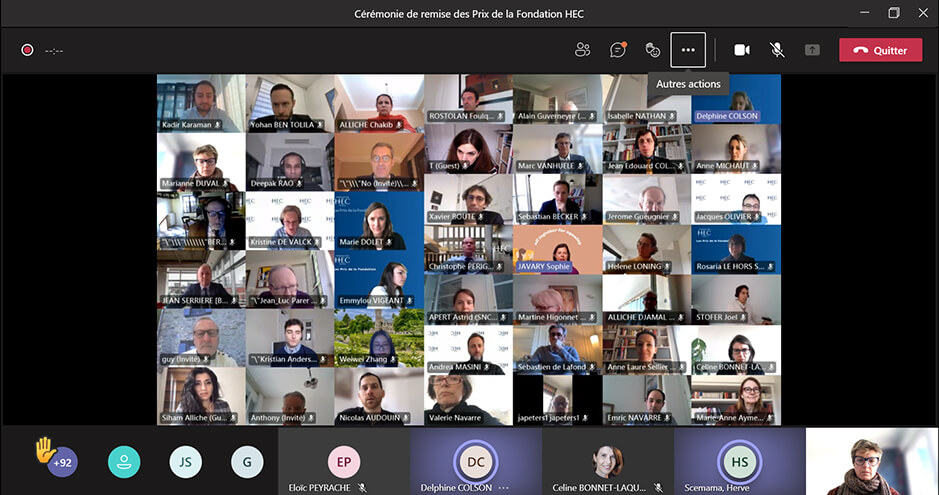 In 2020-21, this progress in research took a totally unexpected turn, as all those participating in the Foundation Awards ceremony pointed out. Responding to the successive health-related lockdowns, the school’s academics ramped up their research into novel forms of digital teaching and transmitting research to their students. They applied these to telling effect, which was the main reason for the Foundation’s decision to hand the entire teaching staff the first-ever Honor Prize. This was marked by an explanatory video featuring interviews of some of the school’s professors: “I decided to totally reshuffle my classes, pre-recording six of the 18 hours of lectures I had,” said Affiliate Professor of Finance, Ferdinand Petra. “Online classes allowed me to personalize the student experience,” added Assistant Professor of Marketing, Ludovic Stourm. “We made videos that were interactive, with animations, embedded quizzes, providing opportunities for students to receive extra explanations.” Stourm’s colleague, Associated Professor Anne-Laure Sellier, expressed an unexpected factor of distance teaching: “This medium encourages greater intimacy. Students have been learning at a deeper level than before. And it allowed students who are inherently shy to interact more – they gain confidence because they are not interrupted as much.”

Sellier was also awarded the Foundation’s Best Article Prize for her 2019 paper “Debiasing Training Improves Decision Making in the Field”. In announcing the award, Pascal Baumgarten (H98) underlined the universality of her research: “Anne-Laure shows us how we are all subject to cognitive bias and how there are direct implications in management.” Associate Professor of Finance, Jean-Edouard Colliard, meanwhile, was conferred the Foundation Research Prize for both his top-class A+ publications and the impact his work has made in his domain these past three years. Colliard warmly thanked the jury and stressed his vision of the researcher’s role: “We are trying to create an environment at HEC where researchers and students are productive and have pleasure in being surrounded by an ecosystem which will motivate them intellectually.” 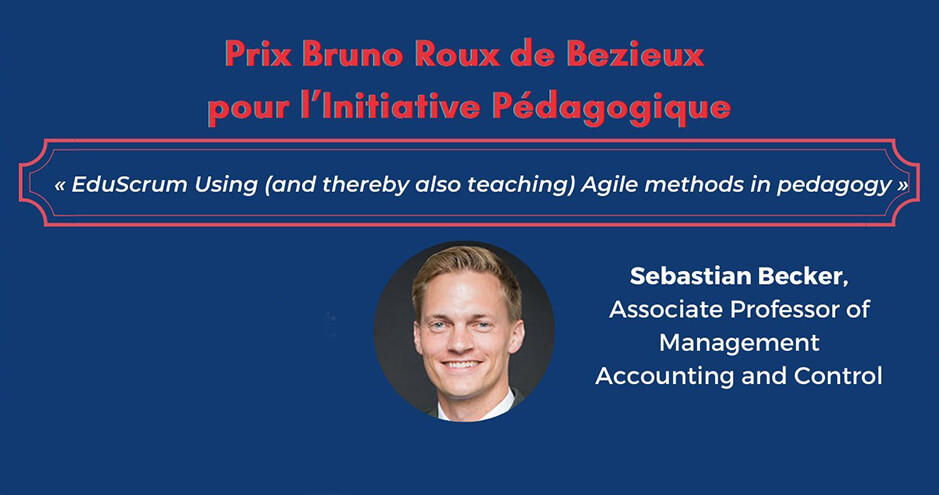 Associate Professor of Management, Sebastian Becker saw his work rewarded the Bruno Roux de Bézieux Award for Pedagogical Initiative. De Bézieux (H55) had a major impact on HEC teaching in the 1960s by introducing the US-born case methods. Becker has been introducing agility, or “adapted management” into his classes, thanks to a program he’s called EduScrum. This original initiative transforms students into stakeholders “who tell me what they want to learn”: “I then become the product owner and manage the backlog they have provided,” explained the academic. “As the class evolves, we re-prioritize, working largely with sprints and retrospectives.” Becker admitted it was challenging but rewarding for all: “Students become co-creators of knowledge. It’s really applying Learning by Doing.”

Major Awards for Students in All Categories

Nine students were also rewarded for their outstanding work with a series of prizes ranging from Best Grande Ecole/Master Essay to the Best Doctoral Thesis Award. The former was attributed to a joint effort by Siham Alliche (H20) and Kristian Andersen Faraglia (H20). They were applauded by Jury President Sophie Javary (H80) for their originality in studying ESG incorporation strategies and how these impact the general economic performance of European SRI funds. “This is the most beautiful honor I’ve ever received,” said Alliche, who now works as an analyst at Accuracy. “Our topic is nascent but so necessary. We chose it because of our personal convictions and wrote it despite the rigors of the first lockdown.” Professor Marc Vanhuele praised the teamwork, “which is an unusual feature in this context.” He continued: “This is research of the highest quality and the fact that we honor it just weeks after Danone removed their CEO, Emmanuel Faber, underlines how topical your research is.”

The relevance of the prize-winning work by Sanâa Kiadi (EM20) was also underlined by Bernard-André Parent, the founder of an award his Foundation designed in 2019. “Sanâa analyzed with brio African migration and how this global challenge can be an opportunity for Europe. As you show, Sanâa, these migrations call for brave multi-lateral solutions to erase the strong divergences between populations.” Kiadi was clearly moved in accepting the award: “What an incredible experience! I would like to dedicate this prize to the women migrants who take incredible risks. I wish for them security, peace and stability.”

Other student recipients of the prizes also shared their gratitude and emotion. Kadir Karaman (E20), for example, thanked the jury who recognized the hard work invested in his EMBA memoir on the fashion industry and sustainability. Fei Gao expressed his heartfelt thanks to the guiding hands of professors LJ Shrum and Kristin de Valck in completing his “balanced and innovative” three volumes (400 pages each!), which took the Doctoral Thesis award. And Emric Navarre used the opportunity of his MBA Prize to underline the reactivity of the professors in adapting their work during the COVID-19 crisis: “We measure the amount of sacrifice this needed from all the academic staff.” 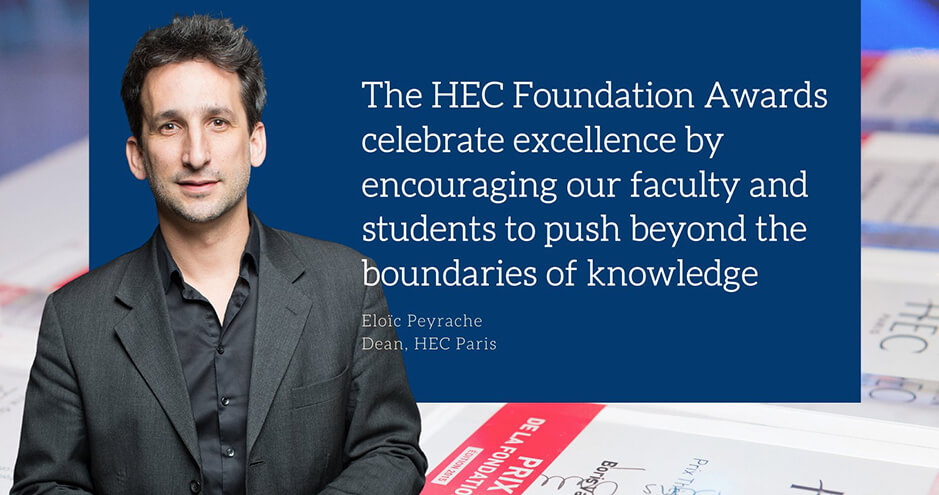 This commitment was also praised by Dean Eloïc Peyrache who insisted on the importance of a ceremony which “highlights the quality of our faculty and the outstanding work produced by students from various HEC programs”: “These awards,” he said “are the result of HEC’s determined and continued investment in research and the excellence of its programs.” 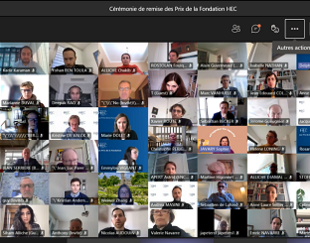 For the 44th edition of the HEC Foundation Awards, we decided to innovate and propose a digital ceremony to honor and reward the very finest work by the students and professors of HEC Paris. This new... 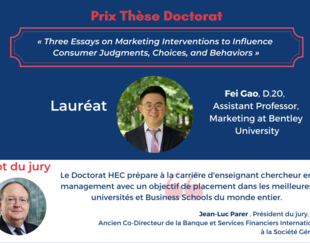 This year at the HEC Foundation Awards ceremony, nine talents were rewarded for the excellence of their research, career, and pedagogy, including a Ph.D. student and three professors of HEC Paris. The...
Share
FACEBOOK
TWITTER
LINKEDIN
EMAIL