Purposeful Leadership: Awarding Students for their Work on Purpose

Sodexo CEO Denis Machuel helped bring down the curtain on the three-month freshman course in a closing ceremony featuring 381 students, 18 tutors and a top academic team from the S&O Center. The event also featured wisely words from program backer Hubert Joly and the students’ top essays devoted to purposeful leadership in the business world. 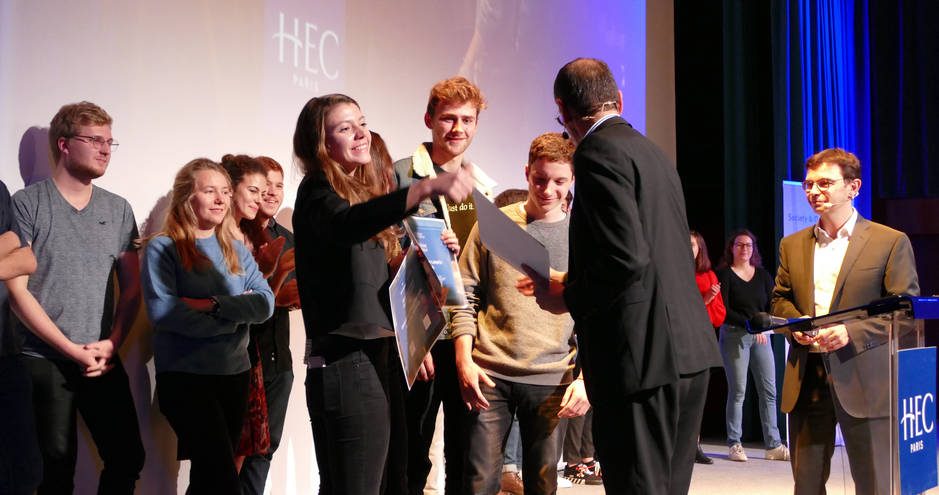 “This is a fabulous program. It’s essential that these leaders of tomorrow invest their work with a sense of purpose. They will be the locomotives driving the men and women in their companies towards a working environment allying economic development to social and environmental prerogatives.” The words of Denis Machuel reflected a general feeling of satisfaction for the 95-day Purpose and Leadership program designed by Rodolphe Durand and Cécile de Lisle for the entire HEC Grande Ecole 2019 intake.

The November 28 closing ceremony at the Blondeau Amphitheater marked the end of the first year of a program aiming to encourage a new vision of leadership based on the “knowing-how-to-be” or savoir-être. “The role of a leader,” noted its sponsor, Hubert Joly, “is to create an environment in which authentic human connections can be made, both within the organization and with clients outside the organization.” The HEC graduate (H81) has used the approach to turn around his Best Buy enterprise and he now hopes to diffuse it through the Purposeful Leadership chair created in September 2018.

“You are all part of a new generation and we are seeking to free you from a self-centered style of leadership, and to promote an enlightened one” the Joly Family Chair holder, Rodolphe Durand told students he has been grooming ever since they arrived at the business school in August. The first of a three-year program consisted of a three-tiered experiential course which climaxed with dissertations researched and written up by 100 freshmen student teams of 4. The diversity of the topics chosen reflected the breadth and depth of the program. Some examples: “Should laughter be introduced in a group before a decisive act?”; “Do successful careers mean careers fulfilled?”; “Does contesting authority necessarily harm the efficacy of collective action?”

At the evening event, three essays were rewarded for the quality of work based on the following questions:

“Many of these dissertations were inspiring,” said Denis Machuel. “I’m looking forward to further exploring them with the students. Tomorrow’s businesses needs such leaders. Taylorism has driven a wedge between work and economic strength. The abuses of purely financial capitalism have separated the firm from its humanity, making it nothing more than an instrument to generate profit. I’m expecting courage, clairvoyance and leadership from this HEC generation. The social and climactic emergencies are upon us. There are hard decisions to be taken but the power that all these future leaders represent gives me room for optimism.”

The laureates of the dissertation prizes will share an evening with a “purposeful leader”, one of the teams sharing for example a dinner with General Pierre de Villiers, former supreme commander of French armed forces. After the ceremony, the students looked back at the three-month program with a strong degree of positivity. “Our exchanges with the mentors and business leaders have put precise words to concepts we vaguely studied and helped us understand the tensions in the workplace,” said one. “It’s been a real slap in the face,” added another, “We saw some of the devastating consequences of industry on the environment in places like Chamonix and the Mont Saint-Michel and then worked for two months on the alternatives. It’s been such a learning curve.” A third insisted on the unique nature of the course: “It’s been great to be thrown in the bath at such an early stage of our studies. I feel we’ve seen all  the chain of command in business and it’s made me want to help fellow-workers find purpose in the job place, understand what impact we can all have on society.”

An in-house survey revealed that 90% of the students said their dissertations allowed them to have meaningful encounters. 64% of them said the contextual reading for their essays were stimulating insights into purpose and leadership. And 82% of the participants believed the three parts of the program “nourished (their) reflection on the purpose they would like to give to their studies at HEC.”

Hubert Joly (H.81), Executive Board Chairman of Best Buy and Major Donor of HEC’s Foundation, created in July 2018, along with HEC Paris and the HEC Foundation, the Joly Family Chair in Purposeful Leadership.

Hubert Joly's exceptional gift and the commitment of Nicolas Giauque (H.93), Pascal Stefani (H.88) and Laure Fau (H.93) on this topic made it possible to set up a path on purposeful leadership for all the students of HEC throughout their studies.

This program was launched at the beginning of the academic year of September 2019 and is followed by the entire new graduating class. Read more about the HEC Foundation