HEC Conference on Marketizing Cannabis as a Non-Contested Commodity

Dozens of academics, researchers and students gathered for the end-of-year conference, organized by HEC’s Society & Organizations Center, on cannabis legalization and lessons to be drawn from this contested market. The June 18-19 event, a first at the business school, brought together specialists from North America and Europe for critical insights into regulation, markets, public policy, criminal justice, and much more. But, as the HEC organizers underlined, this most-contested of commodities has issues going well beyond legal and business criteria as it embraces cultural and political debates that have been raging ever since the 1930s. 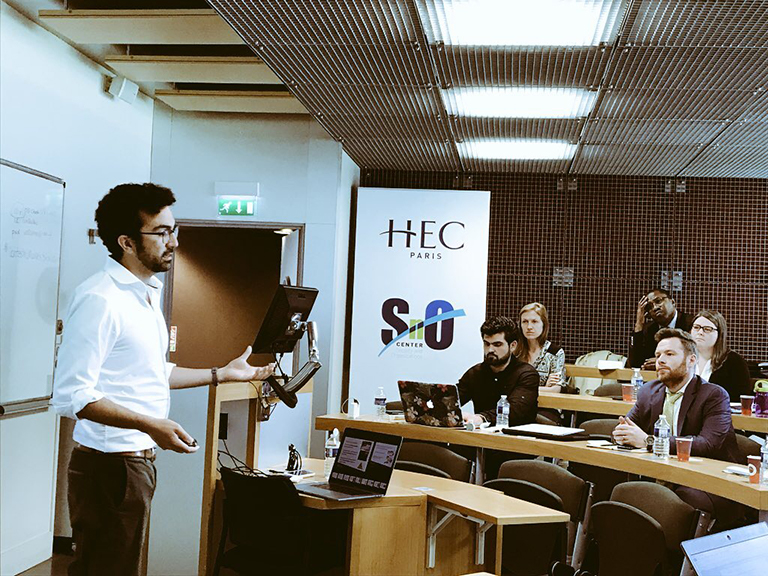 Weed, skunk, puff, Mary Jane, kush, ganja, herb, smoke. There seem to be as many idiomatic expressions for cannabis as laws reprimanding its recreational usage. But, exactly 50 years after the creation of the US Bureau of Narcotics and Dangerous Drugs, is the wind turning for this behemoth of contested markets? The conference co-organizers Dane Pflueger and Daniel Martinez answered in the affirmative in opening the “Lessons from cannabis legalization” conference: under pressure from public opinion, they said, governments, are “rethinking the harms of cannabis and criminalization and decriminalizing, sometimes even legalizing its production, sale and consumption .”

This, as noted by the co-organizers in a just-published Forbes article, is closing one chapter in the history of cannabis (the 80-year-old ‘War on Drugs’). And, they insist, it is opening a new one in favor of decriminalization, leading to cannabis marketization. Martinez and Pflueger decided the June gathering would focus on the latter. “This conference aims to think through cannabis,” they told participants in opening the five-session event, urging fellow-academics to diversify their approaches in their research. “We aim to build bridges between disciplines and geography,” Pflueger told those gathered in the Jouy campus’ T Building. “Let us push back the boundaries. We have gathered an exciting diversity of academics but we need to challenge the comfort zones we still see around us when bringing up a contested market like cannabis. Let us reflect on how our research can enrich public debate and policy.”

A Kaleidoscope of Cannabis Research

One of two keynote speakers, Michel Anteby, brought these challenges to life in his presentation, deliciously named “Bodies, Babies, Eggs, and Sperm: Lessons across Contested Markets”. The specialist in organizational behavior from Boston University compared his research into the “bodily goods” market to the investigations by his colleagues on cannabis. “We split our fieldwork into body parts, some working on plasma, others organs, blood, eggs, contract pregnancy. I worked on human cadavers. My advice is to divide your research into parts: edible, non-edible, medicinal, hemp, and so on.” By the end of the two-day exchange, the co-author of “Who Donates their Bodies to Science” was full of praise for the conference: “I’ve learnt plenty in these sessions. Everyone brought to the fore points that are usually discussed in the sidelines not on conference stages!”

This stage was home to presentations as wide as they were deep. Alexes Harris and Michele Cadigan shared their fieldwork on how the state and workers choose who can be a cannabis entrepreneur; a team led by Andrea Romi described the accountant’s role in transforming the cannabis industry from a black to a gray market; Elizabeth Bennett provided comprehensive insights into prohibition, legalization and political consumerism, both in the US and Canada; whilst there were probing insights by HEC’s Afshin Mehrpouya and Matteo Winkler into, respectively, the use of the Access to Medicine Index to transform cannabis marketization from contestation to competition; and exploiting surrogacy as a legal tools to prevent access to foreign contested markets.

Elizabeth Bennett’s presentation on the historical, legal and political contexts of cannabis also painted an incisive historical and sociological picture. Basing her works on a Portland she described as “quirky, progressive and eco-friendly.”  With regret, the Associate Professor of International Affairs noted that “the labor and environmental issues in cannabis are similar to the ones we find in  other agricultural products.”  Bennett pointed to the dearth of certification organizations monitoring cannabis and pushing the industry toward higher social and environmental standards. “You would have thought associations like Fair Trade would jump on the bandwagon of agriculture’s biggest growing industry, no? Well, no one is touching it with a barge-pole.” Her research suggests that social non-profits are hesitant to become involved with the sector because it is stigmatized. Bennett added that the absence of unions, philanthropists, and activists make it more challenging to create ethically-oriented supply chains. For this reason, “some are still calling it blood weed.”

LSE Accounting Lecturer Tommaso Palermo, meanwhile, shared his team’s unique research on the dynamics of risk objects like marijuana infused edibles “in the making”. “How do multi-stakeholder workgroups contribute to transform the ‘risky’ edible into a ‘safe’ object for consumption?” he asked. Palermo’s research is part of a longstanding discussion on risk culture in financial organizations since it has significant impact on the types of goods allowed on the market.

The role of academic institutions like HEC in researching the different facets of cannabis marketization was underlined by the conference participants. “Cannabis is increasingly becoming big business,” stated Daniel Martinez, co-author of “From Seed to Sale: the Creation of Markets for Cannabis in Colorado”. “As a borderless business school (both intellectually and geographically), HEC can explore and better understand how in these new markets competition, innovation, market segmentation, etc. evolve.” The event’s second keynote speaker, John Hudak of the Brookings Institution, strongly urged all the academics to pursue and popularize their research on cannabis. “Researchers need to disseminate their work far and wide,” he said in a rousing presentation. “We’ve seen that US-led policies aimed at repressing all usages of cannabis have been an unmitigated failure. The right responses are being developed in Colorado or Uruguay. The latter is the first-ever state to legalize and commercialize recreational cannabis, and its example has just been emulated by Canada."

But these examples are under threat," the senior fellow in Governance Studies pursued. "Your research helps inform active policies in fields as diverse as banking, accounting, agriculture, and so on. So, it’s essential to popularize your work, bring it down to the essential 500 words, making it accessible to politicians or their staffers.”

Hudak also warned against the conservative American lobbies pressurizing universities, banks and companies to divest. “The challenges are there: the institutional barriers remain. The General Councils at universities, for example, are scared because they don’t know what cannabis legislation is about, so they are loathe to support research. Even in faraway Uruguay, officials are feeling this pressure: the country's banks are backed by US financial institutions like Bank of America, which are threatening to withdraw their support. At home, federal banks can’t engage with the industry because of money-laundering concerns leading to severe challenges in accounting and auditing the industry. Yet, between medicinal and adult cannabis sales, this sector generates $15 billion a year!”

Taking Off the Blinders on Cannabis

Despite the challenges, the mood amongst the conference participants was upbeat. “Our university has been tremendously supportive of our research,” insisted Heather Carrasco of Texas Tech. “And there’s an almost missionary zeal adopted by workers and backers in this industry, in particular on the medicinal cannabis side,” added Michele Cadigan. “This has helped maintain its growth, despite the visceral hostility to its legalization by (US Attorney General) Jeff Sessions .” John Hudak also pointed to a provision in the federal budget called the Rohrabacher-Farr amendment which prevents the Justice Department from spending its resources to enforce federal laws in the 29 states which have voted through a medicalized cannabis system. “More than anything,” he commented, “this attempted crackdown could actually boost the legalization process.”

Overall, the 20 academicians attending the conference underlined its dynamic multi-disciplinary qualities. “This has been a great event,” said Davide Fortin, research associate at the Marijuana Policy Group at Université Paris I. “I appreciated the inter-disciplinary approach and its informal nature.”  Andrea Romi hoped the organizers will build on this first-ever HEC conference on contested markets. “It would be great to translate some of this exceptional research into powerful tools for policy-makers. Already, there was an important signal here with the involvement of a top Brookings Institution researcher. I hope to see more strong advocates like that.” Romi’s colleague, Heather Carrasco, applauded the diversity of approaches explored over the two days: “On top of the sociological and economic angles on cannabis, we discussed women’s perspectives, we contextualized historical attitudes to marijuana and its links to immigration and race. It definitely broadens this field, takes off the blinders compared to other conferences I’ve attended.”

As universities such as McGill in Canada begin workshops on the industrial production of cannabis, the two Assistant Professors of Accounting at HEC Paris, Daniel Martinez and Dane Pflueger, are hoping a follow-up conference will tackle some of these burning issues around this commodity and its marketization.