Almost 300 people participated in the second edition of the HEC Alumni’s Festival Life Project, devoted this year to the theme “The Future of Work Belongs to Optimists”. Conferences, speed-coaching, networking, workshops and high-velocity roundtables featured over the two days in early April. It came to a fitting end with galvanizing talks from Rodolphe Durand, Hubert de Boisredon and Alain Gauthier. 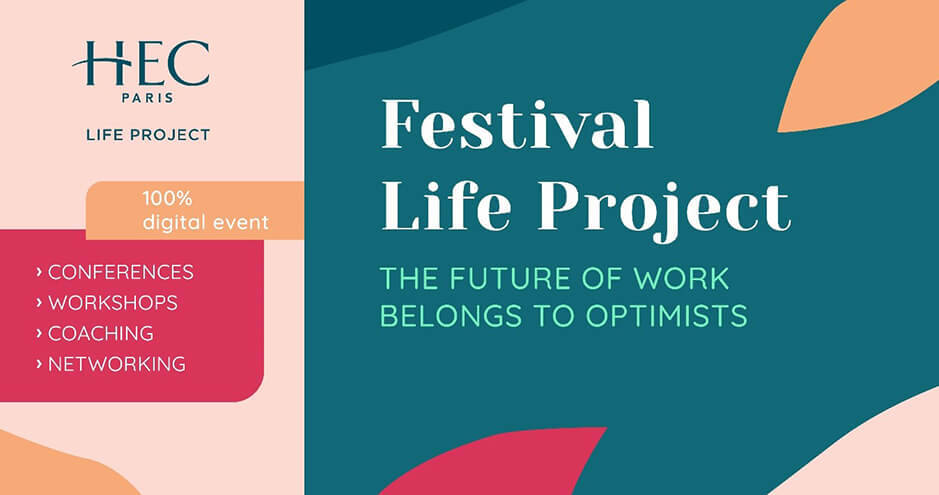 162 years ago, Voltaire introduced “optimism” into popular culture in his classic satire “Candide”. At the time, the Latin optimum signified “the best” and French philosophers attributed “the greatest good” to a word that found coinage in English in 1841, thanks to Ralph Waldo Emerson.

Fast-forward 180 years, and current expressions of optimism were at the heart of debates by HEC Paris graduates and guests, this time in the context of the 21st century workplace, its mutations and its uncertain future. “Contre mauvaise fortune, bon cœur,” said HEC Alumni managing director Marguerite Gallant (H03), in opening the two-day conference with trademark positivity. “We refuse to get carried away with pandemic-induced morosity. Instead, we aim to inspire people to develop resilience in front of the new challenges the crisis has brought us and seize the opportunities that arise.”

To bring the topic to life, the organizers invited topnotch practitioners, researchers, coaches and observers. “We are convinced there is an urgent need to cultivate optimism to answer the complex and passionate challenge that businesses and professionals face,” wrote the organizers who enumerated the fields the festival was to cover. Neuroscience, quest for meaning, social and environmental impact, positive psychology, reconversion, adaptation, solidarity, were just some of the fields covered in one of the school’s most interdisciplinary events of the year.

Optimism Can be Synonymous with Progress

HEC Associate Professor Ilona Boniwell, threw down the gauntlet in the opening talk entitled “The future of work is already here! Are you Ready for it?”. Boniwell is one of the most renowned academics in the field of Positive Psychology and she set her 75-minute exchange firmly in the context of the current pandemic. “69% of workers are in mental distress at the moment, many have lost their employment. This has made optimism a rare commodity, none more so than in France. But we should be happier here! France’s health and education systems have shown resiliency, people work less and enjoy longer holidays. So why does the country languish so far down the global table of optimism?" (Ed., French adults are Europe’s most pessimistic in terms of their personal lives , according to a recent EU study,) “Because it’s unfashionable. Being optimistic is translated as lacking a critical mind. And that’s simply not true, you can be optimistic and be able to progress in all fields! The secret is to fix objectives and the numerous paths to reach them.”

Performance & Growth coach Benjamin Depraz-Brenninkmeijer (H13) mapped out the paths to optimism in a popular workshop he led entitled “True Optimism: Letting go of the Happiness Fantasy”. His messages were later reinforced by a duo of HEC graduates, Aurore Abécassis (H14) and Claire Durand-Gasselin (H13), who shared their stories in a 60-minute workshop called “HEC Switch Stories: how to reinvent your professional life”. Monitoring the exchange was Jennifer Moukouma, CMO of NUMA (which has a partnership with HEC Paris designed to accompany those seeking a job conversion). She reassured participants at the end that the exchange: “Thanks to your transparency, Aurore and Claire, you’ve shown the path for those ready for a reinvention of one’s career. The process needs time, deep questions must be answered, errors will be made, but optimism helps us to get back on our feet.”

The regeneration of society’s very fabric has been at the heart of keynote speaker Alain Gauthier’s recent work. The HEC graduate (H61) has been working on evolutionary co-leadership for several years and believes the turbulence provoked by the pandemic will further catalyze a societal transformation. Speaking from his home in Portland, Oregon, Gauthier mapped out his vision designed, in his own words, “to partner capabilities in and across the public, private and civil society sectors”: “This evolution is accelerating,” said the Executive Director of Core Leadership Development. “There is less and less individualism, and more and more collectivism. We are on the crest of a ninth wave and must answer certain core questions: Are we part of this whole, which gives us our energy? Are we willing to give to this whole? There is a need for synchronicity between what is inside me, my desire to create and improvise, and a sense of collective cohesion in which I subscribe on a global level. ”

The question of optimism is a central element in purposeful leadership, as discussed in extenso in the Festival’s final session, masterfully orchestrated by Cécile De Lisle (H04). De Lisle is the executive director of the HEC Purposeful Leadership Chair. As such, she co-engineers courses designed for the next generation of business leaders to put purpose at the heart of their companies.

Around the virtual roundtable were Rodolphe Durand (H97), holder of the Joly Family Purposeful Leadership Chair, and Hubert de Boisredon (H86), CEO of Armor. In the session, they shared a powerful, often personal, exchange which laid bare the positive impact optimism can have in the workplace. But first they described the experiences which had led them towards espousing purposeful leadership. “When the 2008 global financial crisis hit us, I felt somehow I was co-responsible,” said Durand, “because I had been teaching some people who were perhaps involved in this disaster. On a global scale, business schools contributed to the success of these people who, for organizational incentive reasons, participated in a build-up of debts that were transferred from the private to the public, with the results we all know. The 2008 crash is when I decided that my research could no longer be dissociated from society and I created the HEC Society & Organizations Institute.”

For Hubert de Boisredon, it was a fateful stay in the United States of Ronald Reagan in 1985 which opened his eyes to the incongruities of a system based on maximum profit: “I was 21 years old, at the University of New York where everyone was pushing this system. But all I saw around me was poverty. How could profit resolve poverty? So I went to Chile where I saw that business could have a societal role. Inspired by Mohammad Yunus, I founded Contigo with a friend from HEC. It was one of Latin America’s first microcredit banks. It’s helped guide my vision ever since.”

An Armor for Confidence and Optimism

For both men, optimism and confidence go hand-in-hand. And their experiences on the field appear to show that the latter has a crucial role in increasing efficiency and, ultimately, performance in business. “With purposeful leadership comes confidence,” explained Durand. “We are a dozen researchers, mainly at HEC, working on such factors and the results from a study on 1,500 firms show that 30 to 50% of the increase in team efficiency is explained by trust and autonomy. Another interesting factor, by the way, is that when a male team is led by a woman incarnating purposeful leadership, well, stereotypes just disappear, and efficiency also leaps up. You could say the same for leaders with different cultural backgrounds, like ethnicity or religion.”

“My experiences at Armor concur with the research,” said de Boisredon. “Since I arrived there in 2004, you could say the company has been a laboratory for management-through-confidence. Before my arrival, it was a case of ‘divide and rule’, suspicion was rife. I encouraged people to let go - ‘lacher prise’, in French - and the collective effort created the confidence which helped revitalize the company.” Since then, Armor has become synonymous with employee wellbeing, social cohesion, environmental sustainability and good relations with its providers.

Equally strong a testimony was de Boisredon’s ode to vulnerability: “Workers prefer somebody who says, ‘I don’t know’, to someone who has an answer to everything. It should be inculcated in all the teaching at HEC: the virtues of telling the truth, being authentic and showing one’s vulnerability. This is revolutionary because it’s counterintuitive. A leader must accept her or his own vulnerability, especially in these troubled times.”

This posture of vulnerability was picked up by co-organizer Marguerite Gallant in her closing remarks: “In Hubert’s experience at Armor, he’s shown how revealing one’s vulnerability can be a cement that brings together all employees in a company. This management through trust is not in contradiction with performance, be it entrepreneurial or financial, as you’ve shown.”

The organizers applauded the strong turnout over the two days, almost 300 participants, compared to 160 at the first festival. “We were all the more delighted as we used a 100% digital format with no Zoom fatigue reported!” said HEC Alumni Life Project manager, Mathilde Courtois. “We believe the mix of talks, workshops and speed-coaching over the course of two days was relevant in these challenging circumstances and the feedback has truly been enthusiastic. It consolidates our intent to promote a holistic approach to professional development.”

HEC Alumni is already working on a 2022 edition: “We hope next time we will be able to combine physical gatherings with digital events and allow for more networking time between participants,” noted Courtois. “We have been very inspired by our successful collaboration with HEC’s Purposeful Leadership Chair and will continue working with academics to build an insightful proposition to our alumni community.” A commitment widely shared in the HEC community.

The entire Purposeful Leadership session can be seen on Youtube.