Rémy Bonny at DiversiTALKS: Engaging for LGBTIQ+ Rights in an Increasingly Threatening World

At the latest HEC DiversiTALKS, political scientist and LGBTIQ+ activist Rémy Bonny denounced the “dramatic” situation for the millions of Ukrainian refugees who have poured into Europe after Russia’s invasion of Ukraine. His organization estimates that as many as 100,000 of these are LGBTIQ+ refugees. In a wide-ranging exchange with students, The Belgian outlined the major challenges his community continue to face beyond the Ukraine conflict. 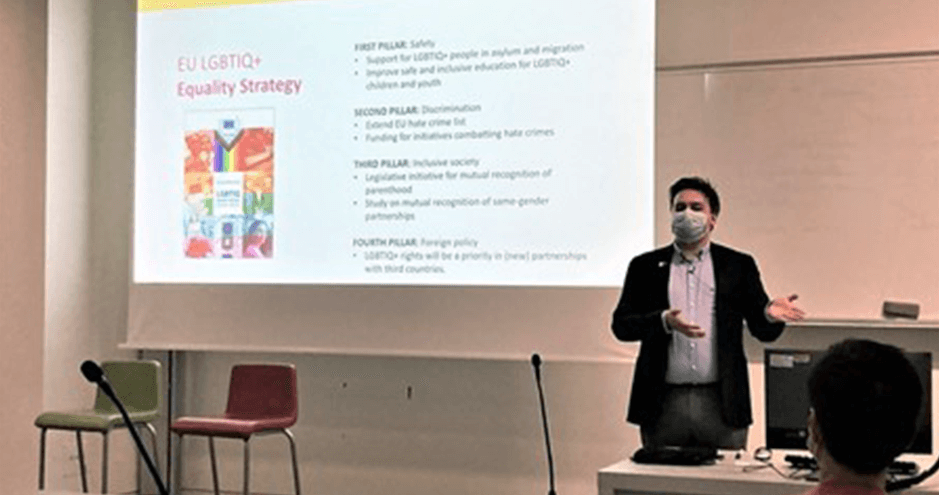 Lack of HIV medication, obligation for female trans people to take up arms, heightened prejudice and abuses. These are just some of the specific attacks Ukraine’s LGBTIQ+ community have been facing since the February 24 Russian invasion forced a mass exodus of its civil population. It’s the latest in a litany of human rights attacks and abuses Rémy Bonny has chronicled in Eastern Europe and Western Asia over the past years. In a detailed presentation, the 26-year-old paints a bleak picture of his community’s plight over the past five years. “There has been a strong backlash since 2017 with the rise of populist and ultra-conservative governments in these regions,” he confided after a 90-minute presentation in March to a live and online audience. “Hungary, for example, has banned same-sex marriage, legal gender recognition, same-sex adoption, neutral press coverage. Legislators even introduced an anti-propaganda law last year prohibiting any promotion of LGBTIQ+ persons. Basically, it was a copy-past of Russia’s ‘gay propaganda’ law and not dissimilar to Britain’s Section 28.” (However, in the April 3 referendum which called on schools to limit discussion of LGBTIQ+ topics, the incumbent president failed to attract enough voters to make the bill legally binding, ed.).

Ironically, these attacks have enhanced the legitimacy of, an international NPO Bonny co-founded in 2020 which has the support of the King Baudouin Foundation. The organization backs all LGBTIQ+ people who are victims of all forms of discrimination and exclusion “so that their sexual orientation is no longer a restraint”. Bonny dates his plunge into activism to June 2019 when he flew into the Georgian capital Tbilisi to follow the country’s first ever gay pride march. “It degenerated into a very, very violent demonstration, literally life threatening. I had to flee using taxis and police escorts to escape the country. If there’s one incident which made me transit from academia to advocacy, it’s this one. I figured: ‘I live an extremely privileged situation, a guy with a university education, coming from an upper middle-class family… I’ve got so many opportunities in our society, it’s up to me to use them now at the service of others.”

The Brussels-based advocate considers the possible impact HEC graduates can also make in encouraging tolerance and diversity. “Many alumni here will end up in business posts with a lot of power and influence. As part of major international companies, they can make statements on LGBTIQ+ rights. I would like to see more companies put pressure on governments. Companies do have influence and they should use this influence for the good of minorities and victims of human rights abuse.” The call resonated days later as Disney CEO Bob Chapek spoke out for a diverse, inclusive world, in response to legislation in Florida referred to by opponents as a “don’t say gay” bill. 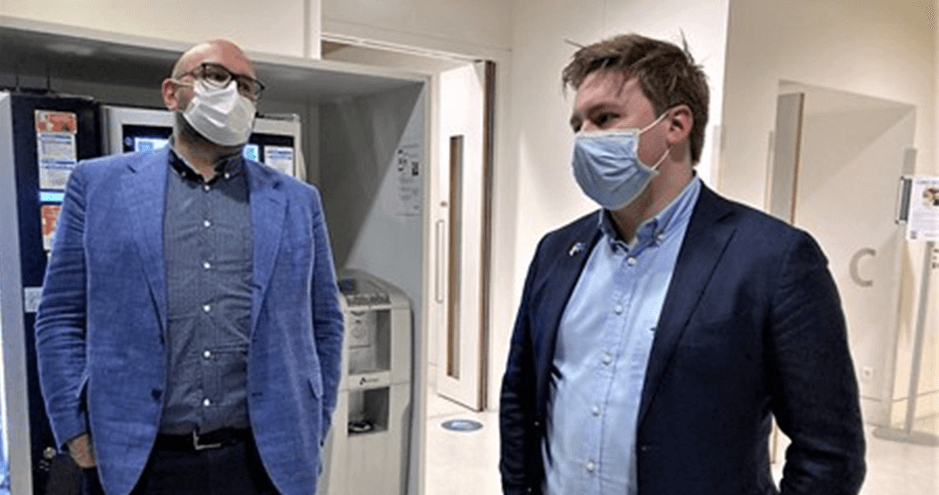 Co-organizer Matteo Winkler underlines the courage Rémy Bonny displays in standing up and being counted: “Rémy is not just vocal, he’s also energetic and passionate,” says the HEC CEMS Academic Director and Diversity Committee Co-chair. “He’s certainly a role model for many of us present. I think he helps the HEC community to reflect on the most relevant ways to build diversity. We have over 100 nationalities present on campus. It’s the ideal place to talk about having the freedom to be yourself. This is where we need to dig deeply into the notions of equality, non-discrimination, trying to consolidate relationships that are considered unconventional. Every time we organize debates on these questions, we make the campus safer. My idea is creating such exchanges to talk frankly about homophobia, anti-Semitism, xenophobia, the war in Ukraine… in ways that make us realize that the campus is nothing else but a miniature version of the world. In this way, we can help students develop a sense of belonging, as part of a diverse family, home to everyone.”

The next DiversiTALKS, is scheduled for April 20, 6pm. Its topic is “Understanding the Russo-Ukraine War: Geopolitics, History, and Law”. To register, please click here. 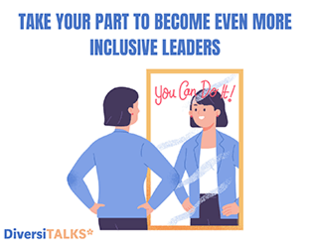 How to Become an Inclusive Leader: the L’Oréal Example 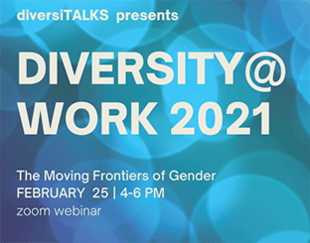 DiversiTALKS: The Magnifying Impact of COVID-19 on Inequalities

How has the COVID-19 crisis and its economic and social consequences shifted the boundaries of gender in the workplace? In its third debate of the year, the HEC DiversiTALKS conference series involved 10... 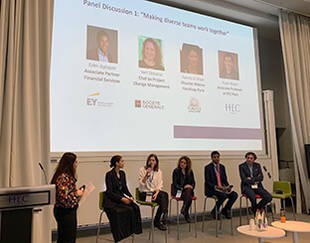 Diversity and Inclusion in the Workspace