The keenly-anticipated 45th edition of the HEC Foundation Awards once again spotlighted the outstanding work achieved by students and professors. Spread over two events in successive weeks, its ten recipients celebrated the awards in front of live audiences for the first time in two years. Dean Eloïc Peyrache marked the occasion by announcing the creation of a new prize to reward the action of an academic with a strong impact on companies, or on the public debate, or on society at large. 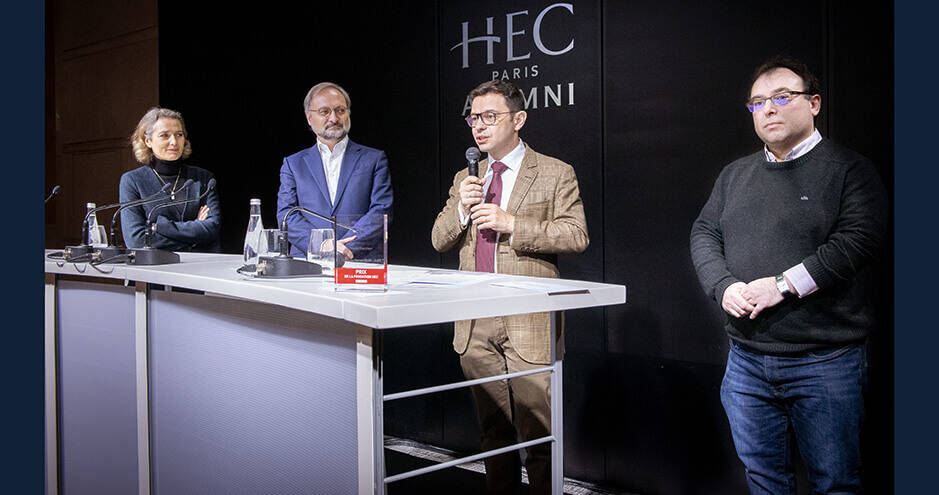 Back in 1977, the first HEC Foundation Awards proclaimed its commitment to supporting educational initiatives, academic achievements and ground-breaking research. 44 years on, the words rang truer than ever. These Awards have become an anchored feature of the HEC year and are set to expand in 2023 with a tenth category to reward the action by a member of the Faculty with an especially significant impact during the year.

Despite the challenging global context this past year, students and academics continued to produce works which, in the words of HEC Foundation Executive Director Delphine Colson (H94), “underlined a strong commitment, first from the professors in terms of adapting their pedagogy and furthering knowledge; and then, from students who accomplished sophisticated work at a time where the health situation complicated matters.”

The COVID-tainted realities did indeed mark the students’ horizons, as epitomized by the winner of the Grande Ecole Memoir award, Olivier Supplisson (H21). Supplisson’s essay focused on alternative out-of-pocket schemes to help hospital patients fight extreme financial burdens. At the March 9 ceremony in the HEC Alumni headquarters on Franklin D. Roosevelt Avenue, the memoir was lauded by the nine-person jury: “This was a work of remarkable relevance,” said Hélène Combe-Guillemet (H79) in presenting Supplisson with the award. And she urged HEC to publish the essay, "thus contributing to the ongoing debates (provoked by COVID-19) which is set to continue in the years to come.” A visibly moved laureate promised the audience he would continue to work for impoverished patients and suggested that “increasing funding from the Public Health Insurance would help overcome this (burden).” 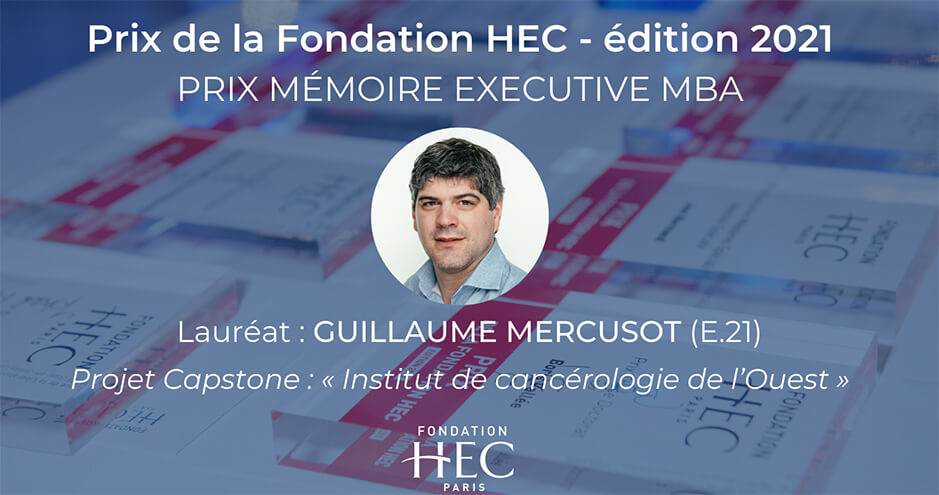 Changing the Paradigm through Data

The memoir by Executive MBA graduate Guillaume Mercusot also touched a health sector drama, one it has grappled with for decades. “(Guillaume)’s project spotlights one of the great challenges of our era,” noted the jury presided by Alain Paplasse (E89), “that of cancer and the cost of fighting this pathology.” Mercusot’s Capstone project centered on his on-the-ground study at the Cancérologie de l’Ouest Institute (ICO). “I have to confide that I knew nothing about cancer before this research,” admitted the laureate in typically self-deprecating mode. “After working on ICO’s business models, I proposed a data-driven model which could help them reconquer their pre-eminence.” 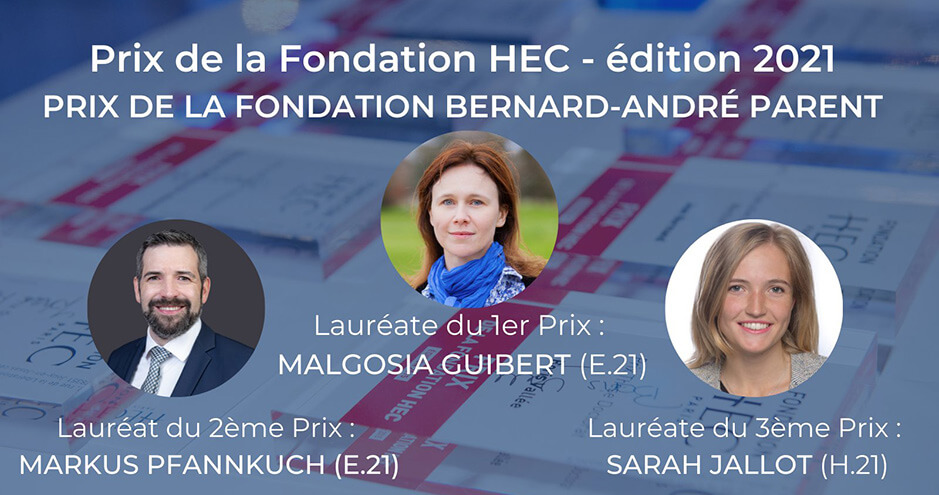 Digital tools were also at the heart of the project proposed by Malgosia Guibert (E21) who bagged the Bernard-André Parent Foundation award. Her EMBA thesis explores ways sustainability data production, analysis and communication can be optimized, thus allowing different stakeholders to better analyze and allocate resources. Guibert’s research has been far-reaching: she has since launched a startup called AI for Sustainability, designed to help large corporations optimize their sustainability reporting efforts. Her award was in a category in which the two runners-up were also rewarded at the ceremony. They shared with the audience projects which had in common sustainability issues. Markus Pfannkuch (E21) had, in the words of the jury, shown “great originality” in a project to better finance operations in the Swiss company Precious Woods where he is Chief Sustainability Officer. Sarah Jallot (H20), meanwhile, was awarded for a thesis looking at practical solutions for investors to integrate ESG indicators into their investment decisions. 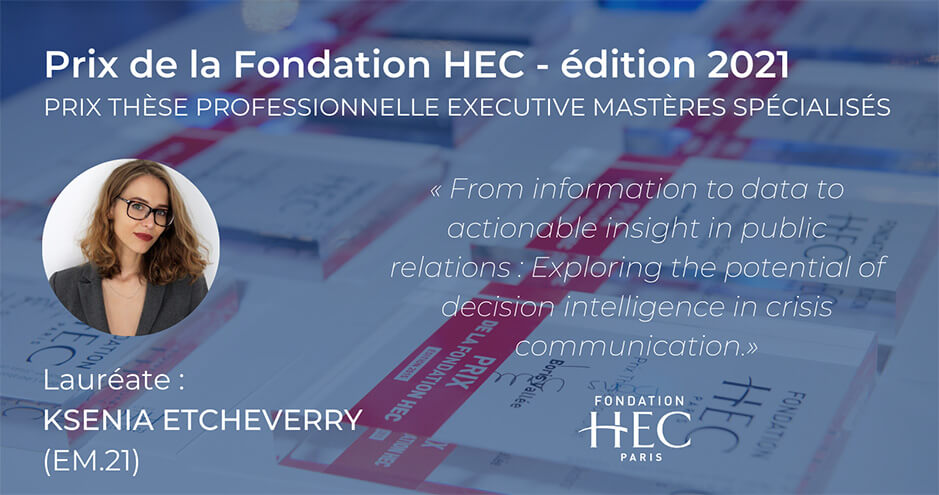 The Best Thesis in HEC’s Specialized Masters, written by Ksenia Etcheverry (EM21), had a particular resonance as the tragic crisis in Ukraine deepens. Her paper proposes a new decision-making framework in crisis communication. To do this, Etcheverry explores mechanisms to better exploit AI and decision intelligence to help leaders anticipate and manage crisis communication. She is currently applying such tools at the heart of her Equanimity digital platform devoted to crisis communication management.

Finally, in this first round of Prix de la Fondation prize-giving, Associate Dean Andrea Masini awarded the MBA Award to Anna Pozniakoff (MBA21) for the way she led her MBA Council team during the long isolation students faced on campus. “Anna proved a formidable leader during one of the most difficult periods students have ever faced, showing resilience, vision, charisma and support for her comrades,” noted Masini who is in charge of the expanding MBA program. And this, despite the birth of Pozniakoff’s child and the intense demands of her studies. 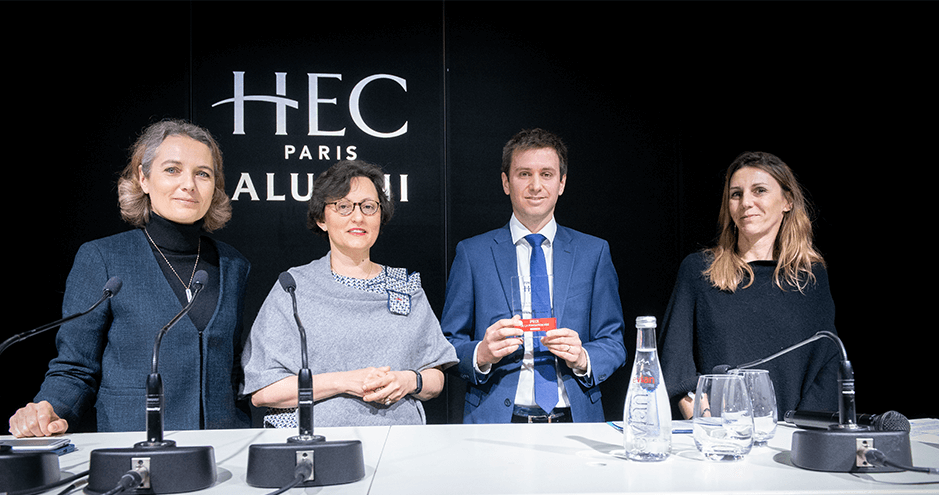 The following week, Les Matins HEC hosted the second round of the awards in the prestigious Pavillon Vendôme in central Paris. The Matin’s 338th edition spotlighted the “ongoing excellence illustrated by HEC’s top academics and the impact of their publications.” Said Dean Eloïc Peyrache: “They are reinventing our professions, as incarnated by the Stourm couple who won the Bruno Roux de Bézieux award for pedagogical initiative.” Indeed, Valéria and Ludovic Stourm were unanimously lauded for the development of an interactive hybrid course for marketing science. The blended learning setup was built to answer the challenges of the COVID sanitary crisis. However, it has been so engaging that many of its features are to be retained in the future, as underlined by jury member Anne Michaut. The Associate Dean for Education Track and Pedagogy has been orchestrating the hybrid teaching response to the health pandemic for the past two years: “All our programs nowadays need digital content, on top of teaching face-to-face. The combination has become so good - largely thanks to contributions by the likes of the Stourm’s – that students no longer imagine that it won’t be part of what HEC offers.” 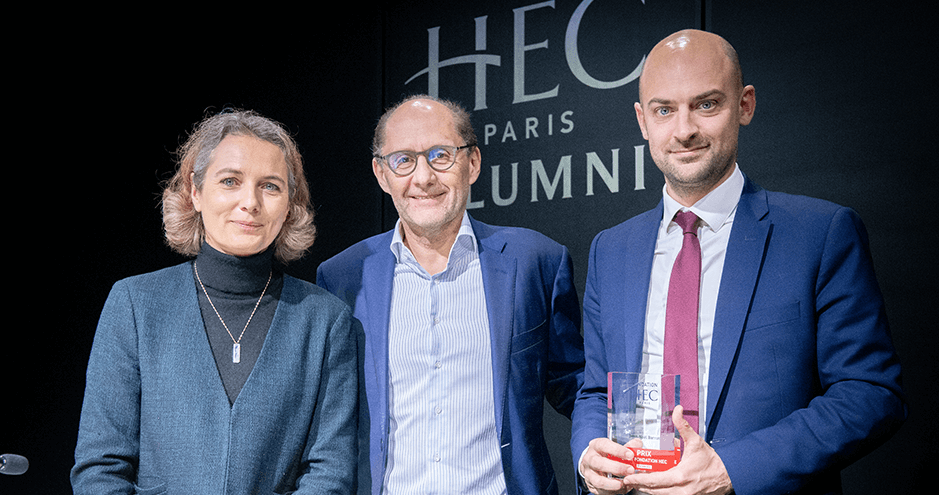 Jean-Noël Barrot’s hands-on engagement in teaching entrepreneurship finance at HEC has not slowed down his research contributions, as witnessed by the Fondation attributing him the 2021 Best Article award. Barrot’s publication was born of observations back in 2011 when the US government introduced Quickpay, a program designed to speed up payments to small businesses reeling from the 2008 crisis. “This is a highly refined analysis of all the stakeholders involved,” commented jury president Bertrand Schwab (H87) in handing over the plaque. Given Barrot’s personal engagement in French politics, it could contribute to what Schwab described as a “methodology for economic policy decisions elsewhere.”  “The study,” he continued, “has the merit of quantifying the impact of these policies in terms of employment or economic growth.” 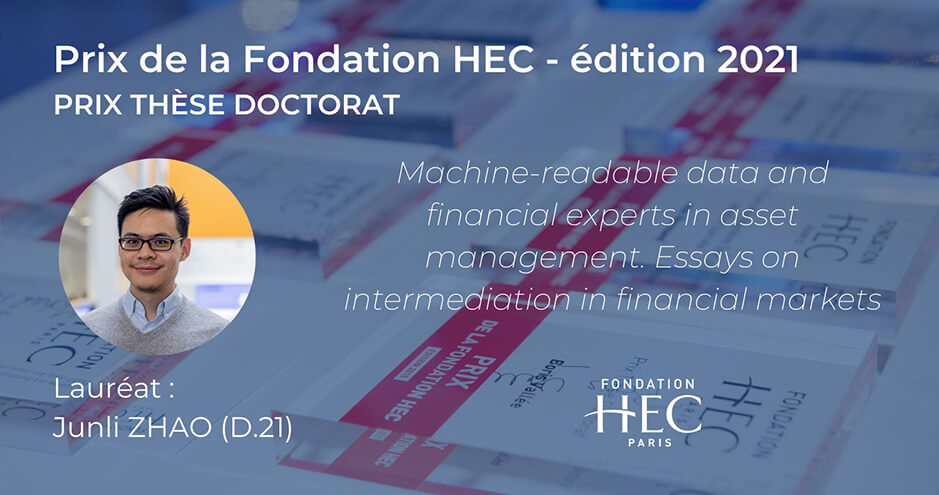 Barrot could arguably benefit from the works of another laureate, Junli Zhao (D21). The winner in the Doctoral Thesis category wrote three papers on recent evolutions in financial markets, in terms of automation, trends in equity research and financial advisers’ influence. The thesis by the 2021 graduate, supervised by Associate Professor of Finance Jean-Edouard Colliard, tackled the consequences for financial experts of the rise of algorithms. Zhao concludes that these experts have nothing to fear from algorithms and machine learning, as the results show they benefit from more machine-readable data. 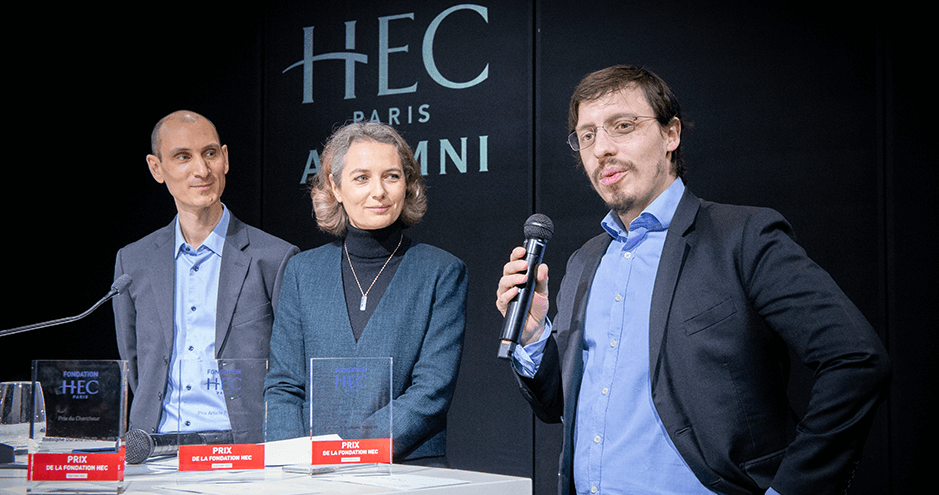 The Academic Director of Society & Organizations Institute (S&O), Rodolphe Durand (H93-D97), succeeded the 2020 laureate Jean-Edouard Colliard in winning the 2021 Researcher of the Year award for his remarkable body of publications. “Rodolphe is one of the, if not THE, most prolific researchers in HEC,” said Faculty Dean Jacques Olivier, in presenting the trophy. “But even that is only the tip of the iceberg. The principal impact of both Rodolphe and the S&O Institute he created, is to stimulate and coordinate the efforts of a community of researchers, teachers and actors on subjects that are changing the world. And this iceberg, contrary to the ones in the North Pole, never stops growing.” In accepting the prize, the “Joly Family Chair in Purposeful Leadership” Professor underlined the collective effort of his team of over 60 professors, in furthering their attempts to reinvent business through actions which “unleash human potential”.

Inspiring Acts on the Ground

This is a drive which continues to feed into the business approach of HEC graduate Adrien Nussenbaum (H01), who followed the prize-giving ceremony with an hour-long exchange with the audience. The co-founder and CEO of Mirakl has himself been awarded the HEC Personality of the Year 2020 and, after the ceremony, he commented on the importance of the work on purposeful leadership established by Hubert Joly (H81) and lead by Rodolphe Durand: “I’m deeply influenced by this management approach and have integrated it into my own style of leadership. For example, the off-site programs Hubert describes in his book where he invited Best Buy employees to bring pictures of themselves as kids, tell their life stories and define what motivates them… It’s a way of sharing which is sometimes uncomfortable for people - but it creates bonds. This is an exercise I am sharing with my employees.” 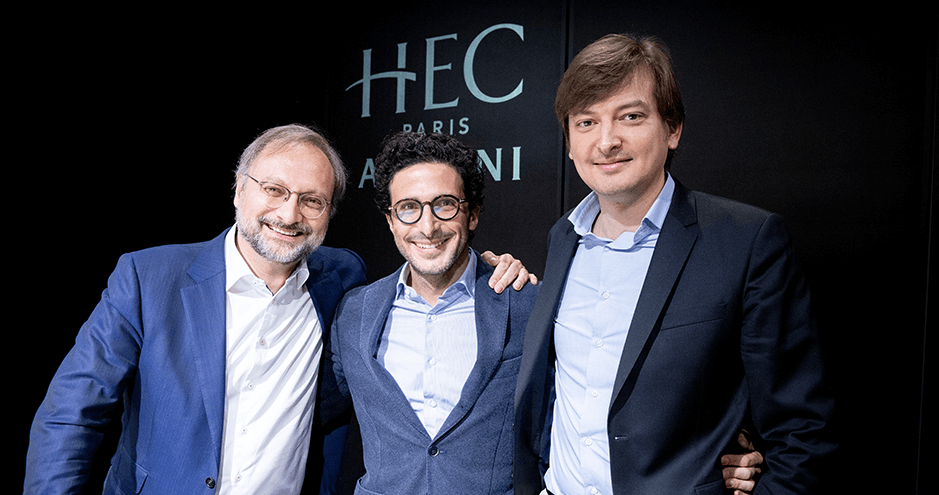 The March 16 ceremony was also the occasion for Adrien Nussenbaum and HEC to announce the first steps of the “HEC Imagine Fellows” scholarship program initiated last October. This program designed for students from war-torn countries was built from scratch thanks to Nussenbaum’s €1 million donation last year. The historic initiative welcomes its first students to the school’s campus in September 2022 and has already recruited an outstanding Afghan talent, Jamshid Mohammadi. “Today more than ever, we have to strengthen the societal role of HEC Paris so that higher education becomes a venue for dialogue between people,” noted Nussenbaum. “The Business & Peace academic pathway and the scholarship program for students from conflict zones are only the first steps that will help us imagine a world where everyone is free to live in peace. The beneficiaries are outstanding students in their home countries and will act as Business & Peace ambassadors on the HEC Paris campus and beyond. We are very happy to welcome Jamshid Mohammadi, the first Imagine Fellow,” concluded the philanthropist, before sharing the Afghan’s application letter.

With the tragic conflict in Ukraine marking the spirits of all those present at the ceremony, the impact of such support became all the more present in the participants’ minds.